3 Following the humor, the question remains- why very few Americans know more than one language.

5 Basic Terms Language: a system of communication through speech, a collection of sounds that a group people understands to have the same meaning. Literary tradition: system of written communication. Many spoken languages lack a literary tradition. Official language: countries designate at least one language, which is the one used by the government for laws, reports and public objects.

6 Origin and Diffusion of English
English is spoken fluently by one-half billion people- more than any language except Mandarin. Mandarin is clustered mainly in 1 country- China. English is distributed around the world: the official language in 50 countries

7 English Speaking Countries
Fig. 5-1: English is the official language in 42 countries, including some in which it is not the most widely spoken language. It is also used and understood in many others.

8 English colonies During the past 4 centuries, English migrated with the who settled in colonies. Jamestown, Virginia 1607: English settlers 1620: Plymouth, Massachusetts 1600s: British took control of Ireland Mid-1700s: South Asia Late 1700s: South Pacific 1800s: South Africa, India English became the official language in each case even if only the colonial rulers and elite residents were the only who spoke it.

9 Origin of English in England
2000 BC Celts arrived 1,500 years ago Angles, Jutes and Saxons arrived from Denmark and Germany 9th c. Invasions by Vikings from Norway 1066 AD Normans from Normandy, France invaded

11 Dialects of English Dialect: is a regional variation of a language distinguished by distinctive vocabulary, spelling, and pronunciation. Differences in dialects reflect distinctive features of the environments in which groups live. When speakers of a language migrate to other locations, various dialects of that language develop. (Migration of English speakers to North America 400 years ago) Standard Language: a well established dialect and widely recognized as the most acceptable for government, business, education, and mass communication. British Received Pronounciation: commonly used by politicians, broadcasters, and actors.

12 Old and Middle English Dialects
Fig. 5-3: The main dialect regions of Old English before the Norman invasion persisted to some extent in the Middle English dialects through the 1400s.

13 Dialects of England French replaced English as the language of gov’t and wealthy after the Norman invasion of By then, England had 5 major regional dialects: Northern, East Midland, West Midland, Southwestern, and Southeastern or Kentish. The dialect used by upper-class emerged as the standard language for writing and speech throughout England. Introduction of the printing press in 1476 to England encouraged the diffusion of the dialect.

15 Differences between British and American English
Isolated by the Atlantic Ocean, English evolved independently during the 1700 and 1800s- few visits to relatives and no means to transmit human voices yet. U.S. English differs in 3 ways: Vocabulary: settlers encountered new objects and experiences in the America. Spelling: strong national feeling in the U.S. for an independent identity. Noah Webster, creator of Webster dictionary was determined to develop an American dialect. He either ignored or was unaware of recently created rules of grammar and spelling in England. Spelling differences- elimination of the “u” from British spelling (“honour” is honor, “colour” is color). Substitution of “s” for “c” (“defence” instead of defense” Pronunciation: Colonists began to pronounce words differently than the British. Prominent difference is a and r (fast, path, half- have the sound of “ah” like father rather than the “a” like man). British also eliminate the letter r from pronunciation except before vowels.

16 Dialects in the United States
Major differences in U.S. dialects originated because of differences in dialects among the original settlers. Isogloss: a word-usage boundary can be constructed for each word. Isoglosses are determined by collecting data directly from people, native of rural areas. 2 important isoglosses separate the eastern U.S. into 3 major dialects: Northern, Midlands, and Southern. Northern boundary runs across Pennsylvania and Southern along the Appalachian Mountains.

17 Dialects in the Eastern U.S.
Fig. 5-4: Hans Kurath divided the eastern U.S. into three dialect regions, whose distribution is similar to that of house types (Fig. 4-9). 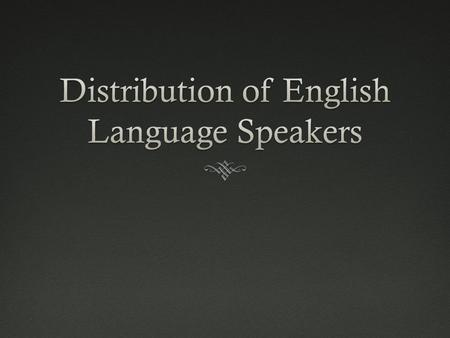 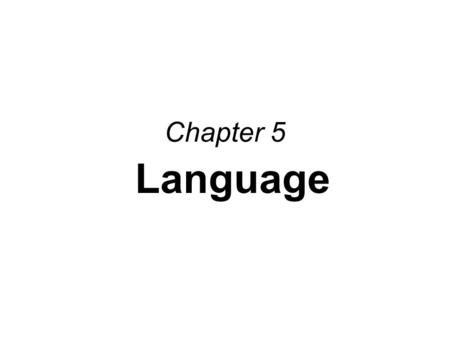 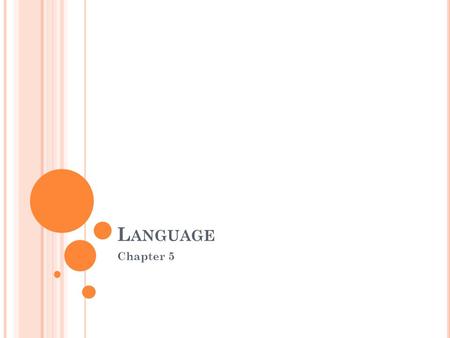 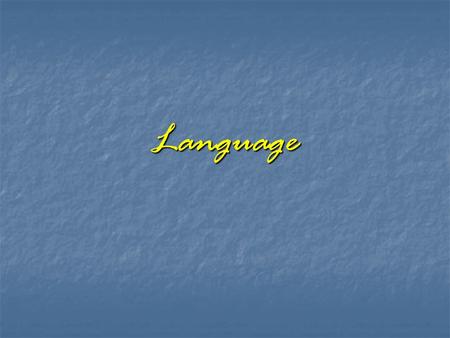 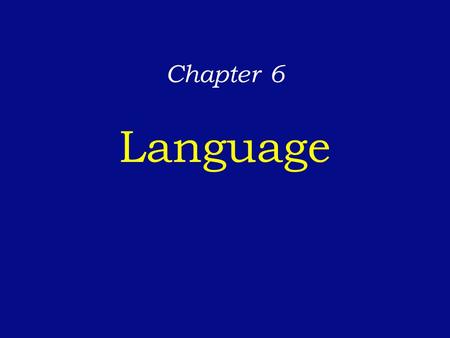 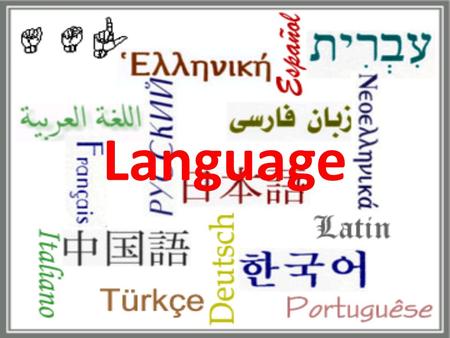 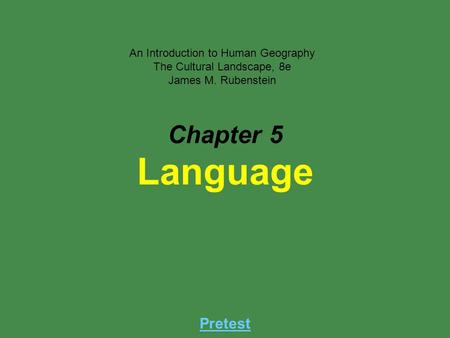 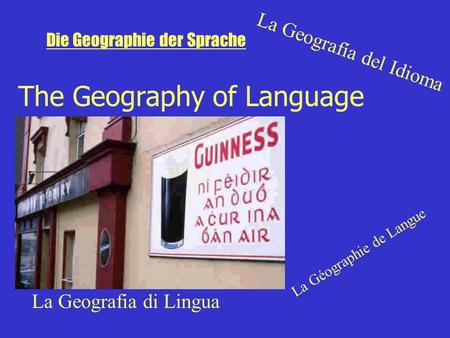 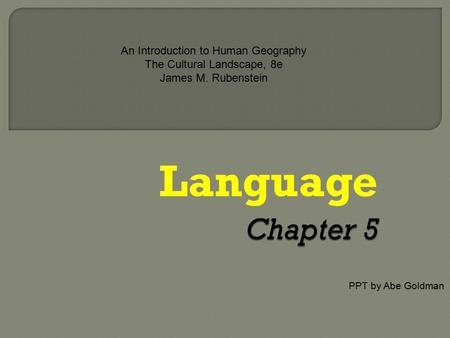 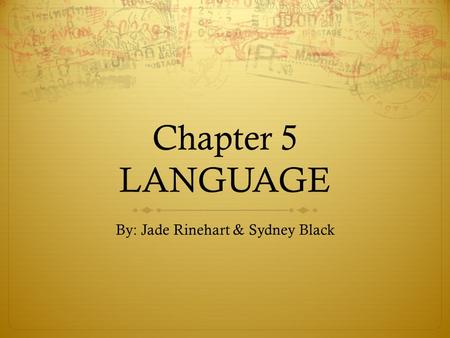 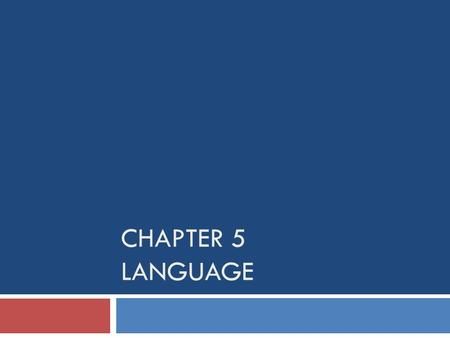 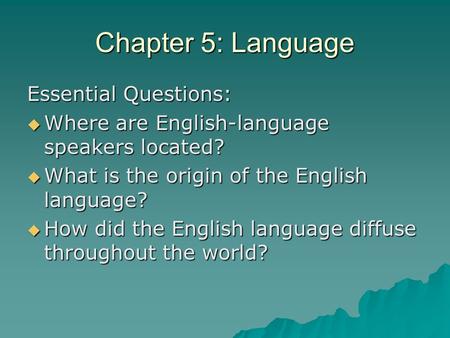 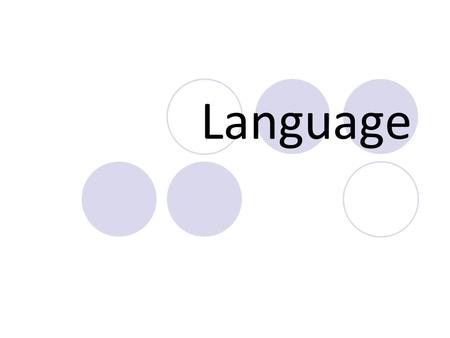 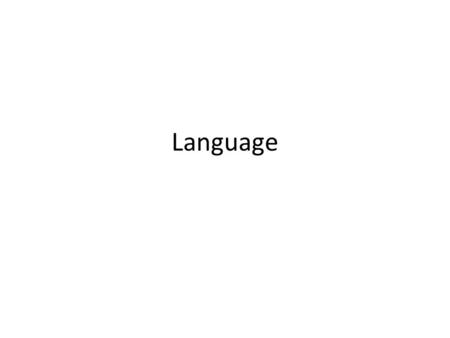 Language. One spatial display of language: Toponyms (place names) Toponyms is a part of cultural identity –a sense of belonging – Language is considered. 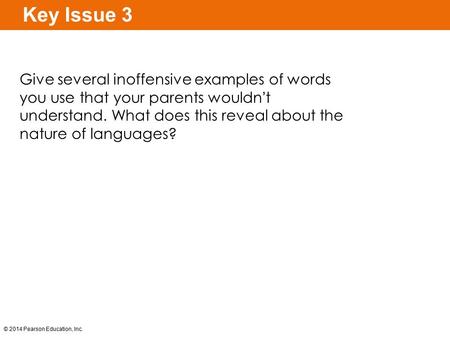