4 IONIC BONDING Happens when an atom of a nonmetal takes one or more electrons from an atom of a metal so both atoms end up with eight valence electrons An electrical attraction between two oppositely charged atoms or groups of atoms.

5 The Octet Rule The octet rule says that atoms can become stable by having eight electrons in their outer energy level, as shown in the noble gas, Neon, (or two electrons in the case of some of the smallest atoms ).

8 Electron Dots For Anions  Nonmetals will have many valence electrons.  They will gain electrons to fill outer shell. P P 3-

14 Neutral atoms come near each other. Electron(s) are transferred from the Metal atom to the Non-metal atom. They stick together because of electrostatic forces, like magnets. IONIC BONDING

16 Steps for writing ionic bond formulas 2. Write the chemical symbols in the correct order, with the metal ion first and write the oxidation numbers as superscripts. Ca 2+ Cl -1

17 Ca 2+ Cl 1- 3. Crisscross the numbers only—not the charge signs—writing the oxidation number of one element as a subscript for the other. Don’t write number 1 either. Ca 1 Cl 2 Steps for writing ionic bond formulas Ca Cl 2

18 4. Determine whether the formula is in its simplest form. Reduce the subscripts to the simplest from by dividing by a common denominator. Ca +2 O -2 Ca 2 O 2 = Ca 2 O 2 CaO Steps for writing ionic bond formulas

19 5. Check the formula by calculating the total positive and negative charges and confirming that the total charge on the compound is zero. CaCl 2 Steps for writing ionic bond formulas Oxidation Number Subscript Calcium(+2)x(1)=+2 Chlorine(-)x(2)=-2

23 6. POLYATOMIC IONS ACT JUST LIKE ANY OTHER NEGATIVE ION WHEN BONDING Treat polyatomic ion as single unit— don’t change it in any way! Steps for writing ionic bond formulas

25 polyatomic ions are enclosed in parenthesis if taken more than once in the formula. A subscript outside the parenthesis multiplies everything inside. Steps for writing ionic bond formulas

30 3. If metal have more than one possible charge (include roman numeral in parenthesis to give charge)* *All metals except: Ag +1, Zn +2, Cd +2, Al +3 Naming Ionic Compounds

41 Do they Conduct?  Conducting electricity is allowing charges to move.  In a solid, the ions are locked in place.  Ionic solids are insulators.  When melted, the ions can move around.  Melted ionic compounds conduct.  First get them to 800ºC.  Dissolved in water they conduct.

Download ppt "IONIC BONDING ION – any atom with more or less electrons that it is supposed to have* * Remember that the number of Electrons is supposed to be equal." 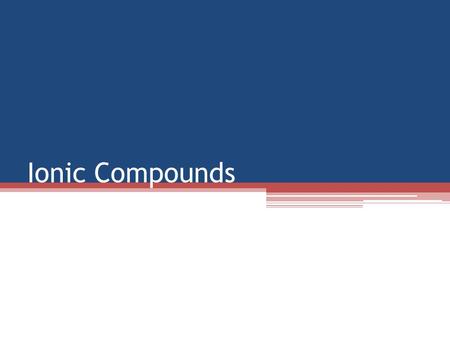