2 The Earth System Study of Ecology and Biosphere

3 Ecology Ecology is the study of the interactions of organisms with one another and their physical environment.

5 Biosphere The Living Globe The Biosphere is that part of the Earth in which life exists.

8 NOW The Climate Change has taken place… The Earth is getting warmer….

10 Why is the Earth’s temperature rising? Human actions affect the Earth by releasing more carbon dioxide into air along with greenhouse gases into the atmosphere.

15 Causes of Greenhouse Effect Main cause of greenhouse effect is fossil fuels. Any carbon-containing fuel coming from the decayed remains of prehistoric plants and animals, e.g. coal, peat, petroleum, and natural gas. When we burn fossil fuels, carbon dioxide is released into the atmosphere to add greenhouse gases. The more fossil fuels are burned, the more greenhouse gases are released. That is why the Earth is getting warmer.

16 Fossil fuels are burned when we -drive a car -take the bus -use electricity -cook food -travel by plane -use hot water -iron clothes -watch TV -have anything made of plastic Fossil fuels are limited and are non-renewable. So our current way of life is the real problem.

19 Drought Dry areas will get dryer. Crops cannot be grown. Millions of people will have to starve.

21 Spread of pests and disease Warm earth will carry diseases harmful to humans and animals. Some of the pests will destroy the trees leading to deforestation.

22 Famine Water shortage and drought will lead to famine. World will face a big problem.

23 Soil Erosion There will be nothing to hold the soil when a tree or a plant is removed. Nutrients on the top layer will be washed away. It will be very hard to grow food. Millions of people will die of hunger.

24 Melting glaciers Melting glaciers will threaten water resources. When glaciers melt, sea level will rise. Darker land underneath will expose, suns heat cannot be reflected and will be trapped to speed up further melting.

25 Coral Reef Destruction Ocean will absorb more carbon dioxide. Acidic ocean will be dangerous for marine life. Ocean ecosystem will be effecting. Coral reefs and plankton will be damaged.

26 Fires Increased temperatures will and storms will lead to severe fire forests. Carbon dioxide will be increased in the atmosphere.

27 Species Extinction Change in climate will lead to many species to relocate or extinction. Polar bear is already in dander situation.

29 Solution of global warming Everyone of us should contribute and take action immediately to save the Earth from global warming. Remember the three R’s- Reduce, Reuse, Recycle. 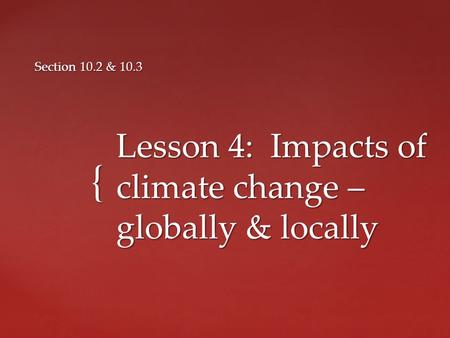 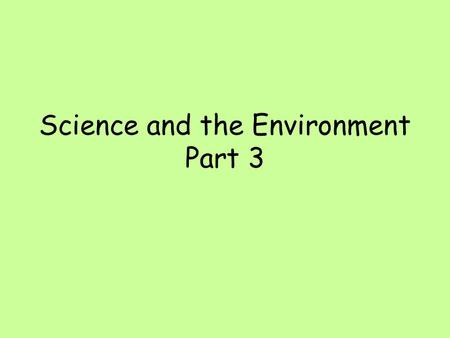 Science and the Environment Part 3. 1.What are the two ways ecosystems experience changes? Ecosystems can experience slow and rapid changes. 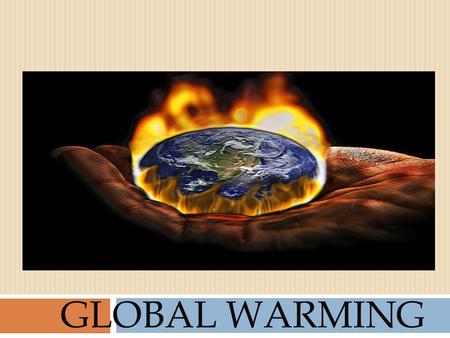 GLOBAL WARMING. What is Global Warming ?  is basically the increase in the temperatures of the Earth's atmosphere, land masses and oceans.  is when.