2 I. Eradicate Extreme Poverty and Hunger Objectives:  from 1990 to 2015, reduce both by half the proportion of people living on less than a dollar a day; and of people who suffer from hunger ; Efforts made by Chinese Government:  Issued the Seven-year Priority Poverty Alleviation Program (1994-2000) in 1994 and the Development-oriented Poverty Reduction Program for Rural China (2001—2010) in 2001.  Accumulatively allocated 70.9 billion yuan fiscal funds for poverty alleviation from 2001 to 2006, an annual increase of 6.3%.  Designated 592 key poverty-stricken counties and 148,000 key poverty- stricken villages as the poverty reduction target.  Adopted a serial of economic and social policies in favor of the poor population. China has achieved the goal before schedule.

3 II. Achieve Universal Primary Education Objective:  Ensure that all boys and girls complete a full course of primary schooling by 2015. Efforts made by Chinese Government:  Totally invested 20 billion yuan in 2 periods of Compulsory Education Programs in Poverty-stricken Areas.  Set up special fund to propel the rebuilding of primary and secondary schoolrooms in rural areas.  Carried out the Two Basic Education Plans in western areas; exempted tuitions and incidental fees from the 148 million students in the period of compulsory education in rural areas. China has made an advanced progress in achieving the goal.

4 III. Promote Gender Equality and Empower Women Objectives:  Eliminate gender disparity in primary and secondary education preferably by 2005, and at all levels by 2015. The objectives also include the proportions of women participated in non-agricultural employment and parliament. Efforts made by Chinese Government:  Set up the goal of overall education and carried out nine-year compulsory education system;  Implemented the programs to help vulnerable group to receive education and meantime, established monitoring system to ensure the effective operation of related laws, regulations and policies;  Chinese Central Government spends 4% of GDP on education ;  The equal opportunity between women and men is protected by the labor law. Women’s political, social and cultural rights are protected. China has achieved before schedule the objective of eliminating gender disparity in primary education; and the objective in secondary education is achievable.

5 IV. Reduce Child Mortality Objectives:  Reduce by two thirds the mortality rate among children under five from 1990 to 2015. The objectives also include infant mortality rate and percentage of children under 12 months who received measles vaccine. Efforts made by Chinese Government:  Made a plan to control children’s diseases  Arranged special funds for children vaccinations and infant and maternal health protection  Carried out the new type of rural cooperative medical care system Progress in achieving the goal is smooth.

6 V. Improve Maternal Health Objectives:  Reduce by three quarters the maternal mortality ratio from 1990 to 2015 Efforts made by Chinese Government:  Started to launch the Mother Safety Plan between 2000 and 2001.  Implemented the project of Reducing the Maternal mortality rate and Eliminating the Rate of the Newly-born Tetanus" （ R&E Project ）  Carried out the program of Healthy Mother Express. China made a smooth progress in achieving the goal.

7 VI. Combat HIV/AIDS and Other Diseases Objectives:  Halt and begin to reverse the spread of HIV/AIDS by 2015; focusing on the rate of incidence of malaria and tuberculosis and related death rate. Efforts made by Chinese Government:  State Council established working committee on HIV/AIDS prevention; Total 31 provincial and 77% prefecture governments have established correspondingly the managing units.  State Council issued the Notice on Strengthening HIV/AIDS Prevention and Control and worked out the Middle and Long-term Plan for HIV/AIDS Prevention and Control （ 1998-2010 ） and China’s Action Plan for Containment and control of HIV/AIDS （ 2001-2005 ）.  Strictly hammered the illegal blood trading, and carried out the policy of “Four Exemptions and One Care ”.  DOTS strategy has been extended to half population, which provided free diagnosis and treatment for tuberculosis patients. It is not optimistic and needs more attention to achieve the goal.

8 VII. Ensure Environmental Sustainability Objectives:  Integrate the principles of sustainable development into country policies and programs; reverse loss of environmental resources; Reduce by half the proportion of people without sustainable access to safe drinking water by 2015. Efforts made by Chinese Government:  Formulated and implemented the state environmental protection strategy of Agenda 21. After that, many cities formulated their own environmental protection plans. The newly completed Great Development for Western China attached more importance to environmental protection. China is the contractors of some International Conventions.  During the Tenth Five-year Plan period, Chinese central government totally arranged 1.83 billion yuan fiscal fund for budget of environmental protection and the fund will increase with an average yearly rise of 24.8%.  China attached more importance to protecting the sources of drinking water, having formulated special provisions for protection of water sources in the Law On the Prevention and Control of Water Pollution and Water Law. The river water pollution prevention and control were the priority in the key work during the Ninth and Tenth Five-year Plans, with the designation of 5716 water sources protection areas.  Priority will be put on solving the water shortage in county towns during the Eleventh Five- year Plan.  Organized to work on the protection plan for urban and rural drinking water. China has made fast progress in achieving the goal.

9 VIII. Develop a Global Partnership for Development Objectives:  Develop a global partnership between the developed county and the developing countries (including the underdeveloped country) Efforts made by Chinese Government:  Established International Poverty Reduction Center (IPRCC) in China to spread China’s experience in poverty reduction to other countries and manage some China’s external poverty reduction assistance projects.  Attached high importance to the development of information and communications industry, implemented the of leap-frogged development strategy of informatization activating industrialization and industrialization promoting informatization. China attached high importance to achieving the goal and made great achievement. 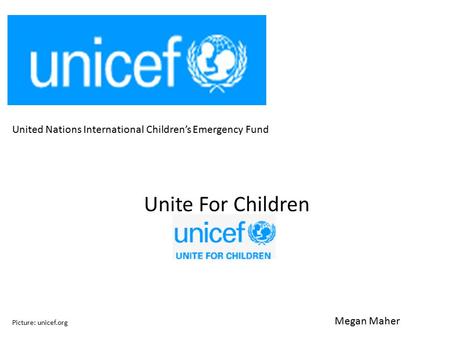 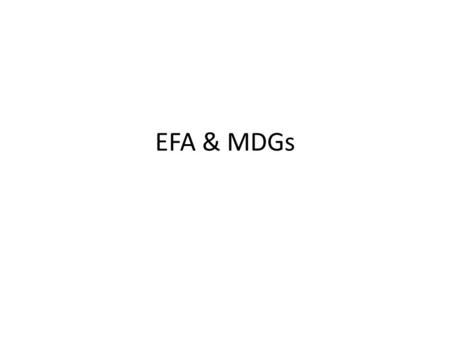