2 2 Executive Summary US employment and job growth data from the last three decades suggests that under the most “highly optimistic” scenario it will take about 31 years to get back to the employment levels of late 2007 (p. 14). This “highly optimistic” scenario is highly unlikely as the longest continuous expansion on record is only 10 years (p. 14). Under all other: “optimistic” (p. 11), “pessimistic” (p. 18), and “highly pessimistic” (p. 21), scenarios “real” unemployment rates that include discouraged and involuntary part-time workers increase from 16.9% (May 2010) to 23.8%, 26.7%, and 29.5%, respectively, by May 2020. Recent (2010) private sector job growth has declined sharply, and as federal stimulus and Census work winds down more state and local government layoffs appear imminent (p. 23). We can’t wait for a private sector driven economic recovery. We need a massive, federally funded, living wage, jobs program now (p. 10) !

3 3 May 2010 Employment Conditions: The Worst Since the Great Depression Employment in May, 2010 was 139.4 million, over 7 million less than the 146.5 million before the Great Recession in November, 2007 (all employment data in this section are from the CPS “household survey” conducted by the BLS). Over this period the official Unemployment Rate has more than doubled from 4.7% to 9.7%, as the number of officially unemployed has climbed from 7.3 million to 15 million, with almost half unemployed for over 6 months - the largest share since data has been collected.

5 5 Young People Need Jobs Average annual 2008-2010 (May to May) over 16 Civilian Non-institutionalized Population growth in the U.S. was 2.047 million. The average pre-Great Recession June 2006 to May 2007 “Labor Force Participation Rate” was 62.21%. Projecting the most recent population growth forward at the pre-recession labor force participation rates gives us an average of 113,000 (66.21% of 2.047 million divided by 12) new entrants to the Labor Force every Month.

8 8 Estimating “Real” Unemployment Rates from “Unadjusted Official” Rates Official U3 unemployment rates do not take into account persons without a job who have looked for work within the last year but not within the last 30 days (people who are “marginally attached” to the labor force) and those who have a part-time job but would like a full-time job (involuntary part- time for economic reasons.) The “marginally attached” and “involuntary part-timers for economic reasons” are both included in BLS U6 unemployment rates that we will call “real” unemployment rates. We will estimate “real” U6 unemployment rates by holding the U6/U3 ratio constant at its most recent pre-recession annual value of 1.74. This ratio has ranged from 1.63 to 1.86 since 1994.

9 9 Optimistic Scenario Assuming average (May to May) 2000 to 2010 Employment growth in the future is “optimistic” as our economy has become weaker since the beginning of the 2008 Great Recession: We no longer have a “housing bubble.” We no longer have a rapidly growing financial sector. Since the 2001 recession the US has lost 42,400 factories including 36% of plants employing more than 1000 workers (which declined from 1,479 to 947) and 38% of factories employing between 500 and 999 workers which declined from 3,198 to 1,972. An additional 90,000 factories are now at risk of going out of business. 1 When plants close they cannot re- employ workers even if demand picks up.

10 10 What will Propel a Private Sector Driven Economic Expansion? There are four major sources of economic demand: consumption, investment, government spending, and exports minus imports. As households (that are not experiencing unemployment) are currently saving more of their income, increased household consumption is not likely to drive an economic expansion. But with consumption demand sluggish at best and a persistent and massive trade deficit, its hard to see what would propel increased real (employment generating) private sector investment in the U.S. At this point, it appears that only a very large scale, permanent, living wage, federal funded jobs program (requiring large increases in government spending), that would complemented by major changes in trade policy leading to reduced imports and increased exports) will be able to get our economy started. 2 This is not “pie in the sky,” a modest financial transactions tax could raise about $1 Trillion and finance most if not all of 20 million new jobs at today’s median wages. 3

13 13 Employment Growth During the Last Economic Expansion If we just look at years of employment expansion during the last decade from 2003 to 2008 (May to May), we get employment growth of 1,581 thousand jobs a year, or about 132,000 a month.

14 14 Highly Optimistic Scenario: Using 2003-2008 Employment Growth to Project Future Employment Growth If we assume monthly employment growth of 132,000 and Labor Force growth of 113,000 we get a net employment increase of about 19,000 jobs a month. At this rate making up for the 7.1 million jobs lost since November 2007 and employing new labor force entrants would take 376 months (7.1 million divided by 19,000) or 31 years. This is “highly optimistic” as the longest period of continuous U.S. economic expansion on record is only 10 years (March 1991 to November 2001).

20 20 Highly Pessimistic Scenario In this case we assume a near future “double dip,” recession, and/or a farther away but within the next decade recession, that result in employment declines that completely off-set employment growth. This scenario thus assumes zero average employment growth for the next decade. This is not what any of us wish for, but the current obsession with cutting federal deficits (which was $ -1.4 Trillion or -9.9% of GDP in 2009, and is estimated at $ -1.35 T or -9.2% of GDP in 2010), leaves in doubt continued employment expansion, as 9-10% of current economic output is dependent on federal deficit spending. 4

23 23 Employment and Job Growth Since January 2010 Though employment began to increase again in January 2010 at a fairly rapid pace, this does not appear to be sustainable. Note that the Official NBER business cycle dating group has not yet designated this as an “expansion”. In June 2010 private sector (payroll) jobs growth was just 83,000, which coupled with a loss of 208,000 jobs, led to a net job decline of 125,000. Overall employment (from household survey) dropped by 301,000 – see Figures 11 and 12. These recent declines suggest that much of the earlier growth was dependent on the massive run-up in federal “stimulus,” direct and indirect Federal Reserve subsidies, and temporary Census jobs (in May), that are now being cut back. 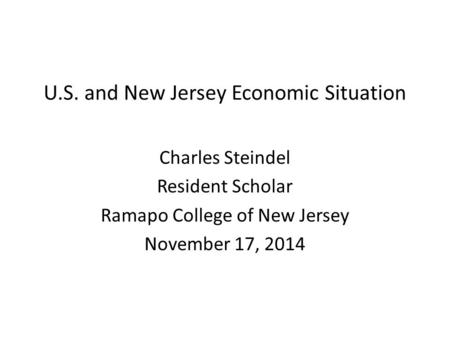 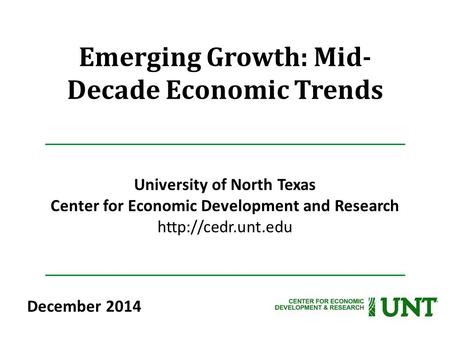 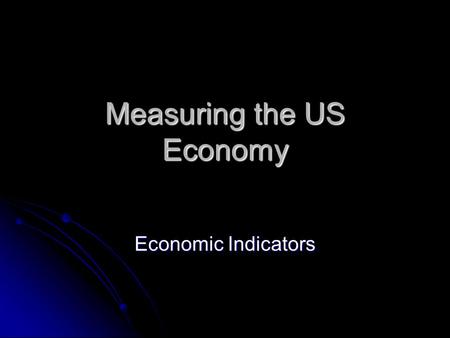 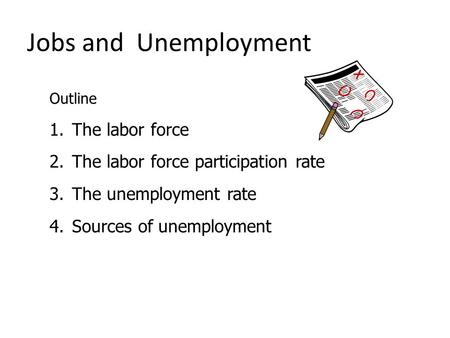 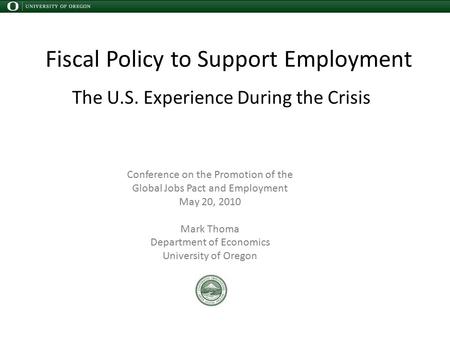 Fiscal Policy to Support Employment The U.S. Experience During the Crisis Conference on the Promotion of the Global Jobs Pact and Employment May 20, 2010. 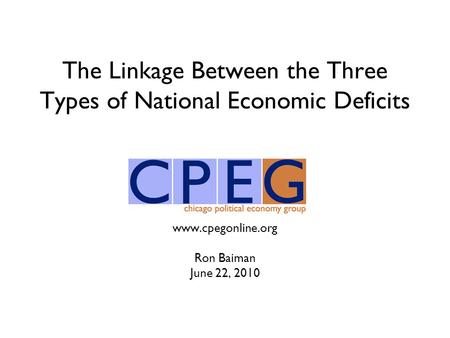 The Linkage Between the Three Types of National Economic Deficits Ron Baiman June 22, 2010. 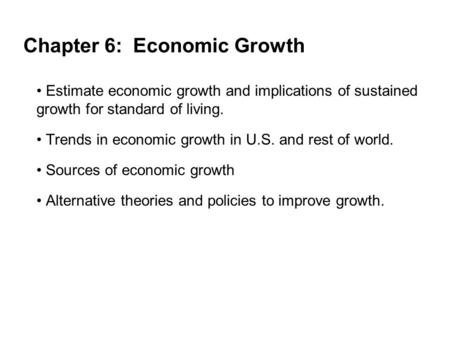 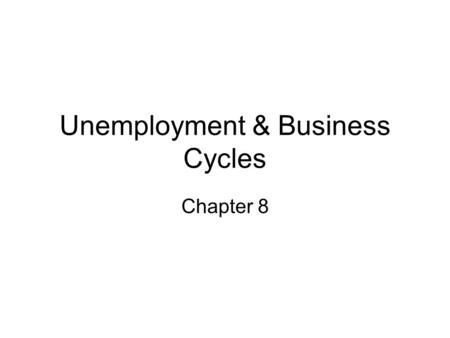 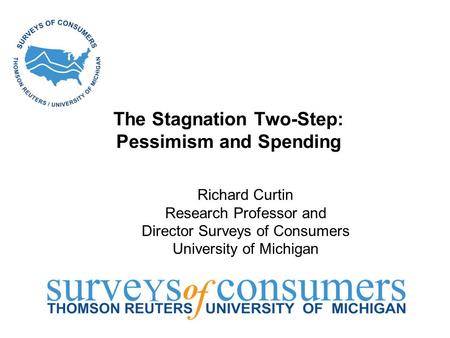 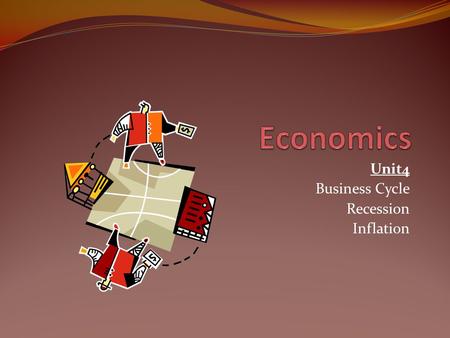 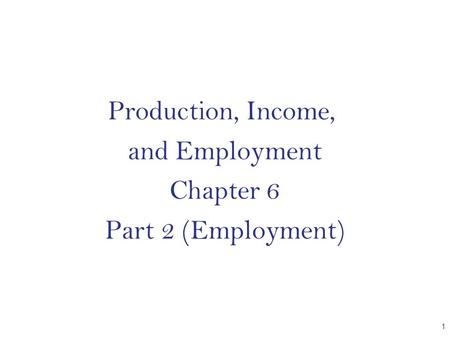 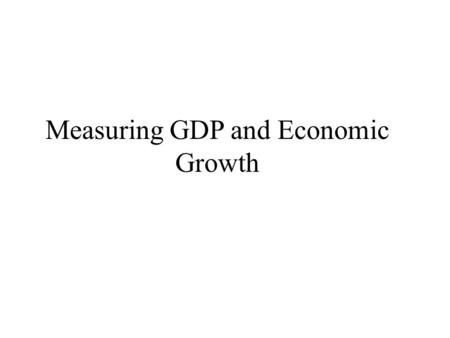