2 Review What are enzymes? What function do they serve?
What makes up the DNA sequence? How is the genetic code determined in an organism?

4 Discovery of restriction enzymes
Bacteriophages infect bacteria by inserting their genetic material (DNA) into the DNA of bacteria In the 1960s, microbiologists discovered that some bacteria are protected from bacteriophage infection because they can restrict phage replication Scientists proposed that restricted growth of phages occurred cause the bacteria contained enzymes that could cut viral DNA into small pieces and prevent replication These enzymes were called restriction enzymes

5 Restriction Enzymes Primarily found in bacteria
Given names based on genus and species names of bacteria from which they are isolated Cut DNA by cleaving the phosphodiester bond (in sugar-phosphate backbone) that joins nucleotides in DNA strand Show specificity for certain DNA substrates Enzymes bind to, cut (digest) DNA within specific sequences of bases called recognition sequence or restriction site Typically recognize 4, 6, or 8 nucleotide sequences

6 Restriction Enzymes Restriction enzyme EcoRI, named because it was discovered in Escherichia coli

10 Restriction Enzymes Enzymes that produce cohesive ends are often favored over blunt-end cutters because DNA fragments with cohesive ends can easily be joined together. DNA from any source, bacteria, humans, dogs, frogs, dinosaurs, and ancient human remains can be digested by a particular restriction enzyme as long as it has the restriction site for that enzyme!

20 Recombinant DNA/Restriction Enzyme Example
In the early 1970s, a group of scientists joined together DNA from E. coli chromosomes and DNA from a primate virus They isolated the DNA from each organism and cut them into fragments with EcoRI They added the E. coli and viral DNA fragments to a reaction tube and added DNA ligase They created a hybrid of the two DNA types, recombinant DNA

21 Recombinant DNA Technology
Plasmids are considered extrachromosomal DNA because they are present in the bacterial cytoplasm in addition to the bacterial chromosome Plasmids can be used as vectors, pieces of DNA that can accept, carry, and replicate (clone) other pieces of DNA

22 Recombinant DNA Technology
Plasmids are considered extrachromosomal DNA because they are present in the bacterial cytoplasm in addition to the bacterial chromosome Plasmids can be used as vectors, pieces of DNA that can accept, carry, and replicate (clone) other pieces of DNA

24 NIH and RAC Scientists were concerned about:
with what might happen if recombinant bacteria were to leave the lab if such bacteria could transfer their genes to other cells survival in other organisms including humans National Institutes of Health (NIH) formed the Recombinant DNA Advisory Committee (RAC) to evaluate the risks of recombinant DNA technology and establishing guidelines

30 Polymerase Chain Reaction
Technique for making copies or amplifying a specific sequence of DNA in a short period of time.

31 PCR (Polymerase Chain Reaction)
1. Target DNA to be amplified is added to a thin-walled tube and mixed with deoxyribonucleotides (dATP, dCTP, dGTP, dTTP), buffer and DNA polymerase. Primers are added to the mixture; they are complimentary to nucleotides on opposite ends of the target DNA. 2. Tube is placed in a thermal cycler (gene cycler). This will take the sample through a series of reactions called the PCR cycle.

32 Thermal Cycler Denaturation – tube is heated to ~94-96ºC separating DNA into single strands Hybridization (annealing) – tube is cooled to ~60-65ºC allowing primers to bond to ends of DNA Extension (elongation) – temperature raised slightly and DNA polymerase copies the DNA by binding to primer and making a new strand DNA polymerase used in this reaction is Taq DNA polymerase from Thermus aquaticcus. Bacteria is adapted to live in hot springs it has enzymes that can withstand high temperatures necessary for PCR.

34 PCR At the end of one cycle, amount of DNA has doubled.
Researchers can repeat cycle (usually times) to amplify millions of copies of DNA

37 Gel Electrophoresis Used to separate and visualize DNA fragments based on size Agarose gel is a semisolid material with small pores through which DNA can travel; fragments are separated by size – smaller fragments can travel further through pores than larger fragments

38 Gel Electrophoresis 1. To run a gel, it is submerged in buffer solution that will conduct electricity 2. DNA samples are loaded into small wells and an electric current is passed through the gel 3. The sugar-phosphate backbone renders DNA with a negative charge; therefore DNA will move to the positively charged end Because migration distance is inversely proportional to the size of the DNA fragment, large DNA fragments migrate short distances and small fragments migrate faster Dyes are added to monitor DNA migration 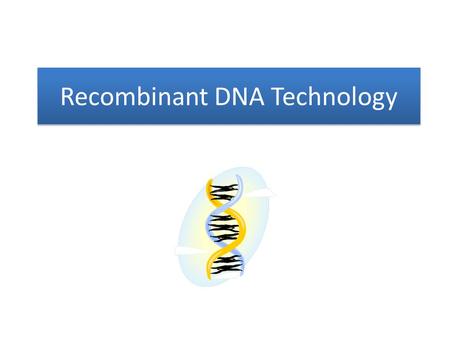