2 BIOTECHNOLOGY Biotechnology – the manipulation of organisms or their components to make useful products Biotechnology is used in all facets of life, and the advances being made in this field are only growing

3 DNA AND BIOTECHNOLOGY DNA is the molecule that holds the instructions for life Scientists have learned how to manipulate it, and insert new pieces of DNA into pre-existing DNA Recombinant DNA – DNA molecules formed when segments of DNA from two different sources are combined in vitro

4 DNA CLONING Gene Cloning – The production of multiple copies of a single gene Often to clone a gene, a bacteria is used The plasmid of the bacteria is more easily manipulated, and a selected portion of DNA (or a gene) is inserted into this plasmid The bacteria then reproduce asexually, producing identical copies of their DNA Each new cell now has the desired gene This can also be used to produce large quantities of a desired protein (not just the DNA)

8 RESTRICTION ENZYMES Restriction enzymes will cut up DNA in to many pieces because, by chance, the nucleotide sequence it is designed to cut will occur many times in a molecule The resulting pieces are called Restriction Fragments Effecting restriction enzymes will cut the sugar-phosphate backbone to have at least one single stranded end known as a sticky end These sticky ends can be ‘glued’ into DNA using DNA Ligase

14 The gene for HGH is then mixed with the bacterial plasmid, and the HGH is incorporated into the plasmid DNA Ligase covalently bond the sugar phosphate backbone The plasmid is then added to the bacteria

15 The bacteria now has the gene for HGH, and has the ability to produce it This shows the process of transformation in bacteria

16 MARKERS Often times, genes can be used as markers to make sure that the bacteria have undergone transformation: FGP – Bacteria will glow under IR light if the gene was incorporated into the plasmid AMP – Bacteria will be immune to the anti-biotic ampicillin

18 PCR Polymerase Chain Reaction – A method used to amplify a piece of DNA quickly, many times, and without using cells Beneficial if DNA segment is short Often used in crime scenes

19 PCR - PROCESS 1.DNA is incubated in a test tube with a special DNA Polymerase, nucleotides, and primers 2.DNA is heated to a certain temperature so that the DNA Ladder separates 3.It is then cooled, and the Polymerase and primers replicate the DNA 4.This cycle is repeated over and over, doubling the amount of DNA every cycle

21 GEL ELECTROPHORESIS Gel Electrophoresis – Process that separates nucleic acids or proteins on the basis of charge, size, or other physical properties Restriction enzymes are used to cut DNA up into different pieces RFLP’s – ‘Restriction Fragment Length Polymorphisms’ Even in the same chromosomes of different organisms, there are differences that are seen in Restriction sites

22 Reservoirs DNA Mixed with different restriction enzymes are put into reservoirs on a gel electrophoresis pad An electric current is then put into the gel. The current moves from the negative end to the positive end, and takes the different lengths of DNA with it Negative

23 The larger pieces of DNA don’t go as far, and the smaller pieces move farther and faster away from the original location The bands that are formed can then be compared to other samples of DNA to eventually determine the genes in the DNA sequence Negative

27 READING THE SEQUENCE Dyes are added to specific nucleotides and put into the test tubes The dyes terminate DNA replication Using gel electrophoresis, the different lengths of DNA are separated 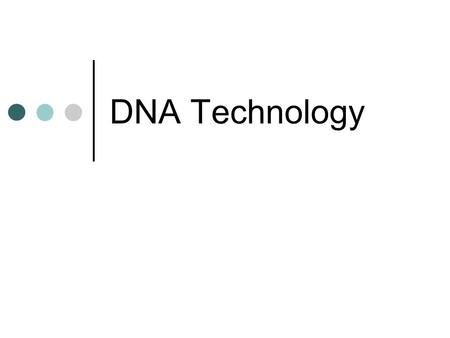