2 Research on Human Subjects Is Guided by Three Ethical Principles
Respect for persons: Treating persons as autonomous agents and protecting those with diminished autonomy Beneficence: Minimizing possible harms and maximizing benefits Justice: Distributing benefits and risks of research fairly Formal procedures for the protection of human subjects in research grew out of some widely publicized abuses of human subjects. A defining event occurred in 1946, when the Nuremberg War Crime Trials exposed horrific medical experiments conducted by Nazi doctors and others in the name of “science.” Many Americans were also shocked to learn in the 1970s that researchers funded by the U.S. Public Health Service had infected 600 low-income African-American men with syphilis in the 1930s without their knowledge and then studied the “natural” course of the illness. Many participants were not informed of their illness and denied treatment until 1972, even though a cure (penicillin) was developed in the 1950s. Egregious violations of human rights like these resulted, in the United States, in the creation of a National Commission for the Protection of Human Subjects of Biomedical and Behavioral Research. The Commission’s 1979 “Belmont Report” (Department of Health, Education, and Welfare 1979) established three basic ethical principles: Chambliss/Schutt, Making Sense of the Social World 4th edition © 2012 SAGE Publications

3 Federal regulations require that every institution that seeks federal funding for biomedical or behavioral research on human subjects have an institutional review board (IRB) that reviews research proposals. The Department of Health and Human Services and the Food and Drug Administration then translated these principles into specific regulations that were adopted in 1991 as the “Federal Policy for the Protection of Human Subjects.” This policy has shaped the course of social science research ever since—and you will have to take it into account as you design your own research investigations. Professional associations, university review boards, and ethics committees in other organizations also set standards for the treatment of human subjects, although these standards are all designed to comply with the federal policy. This section introduces these regulations. Chambliss/Schutt, Making Sense of the Social World 4th edition © 2012 SAGE Publications

4 Usually researches must (1) receive IRB approval and (2) follow professional as well as institutional ethical guidelines. IRB needs to know (1) how the research will be conducted and (2) any possible risks and benefits to the people involved in the study. IRBs at universities and other agencies apply ethics standards that are set by federal regulations but can be expanded or specified by the IRB itself (Sieber 1992:5, 10). To promote adequate review of ethical issues, the regulations require that IRBs include members with diverse backgrounds. The Office for Protection from Research Risks in the National Institutes of Health monitors IRBs, with the exception of research involving drugs (which is the responsibility of the Federal Food and Drug Administration). Chambliss/Schutt, Making Sense of the Social World 4th edition © 2012 SAGE Publications

5 The American Sociological Association (ASA) Guidelines:
Research should cause no harm to subjects. Participation in research should be voluntary, and therefore subjects must give their informed consent to participate in the research. Researchers should fully disclose their identity. Anonymity or confidentiality must be maintained for individual research participants unless it is voluntarily and explicitly waived. Benefits from a research project should outweigh any foreseeable risks. Professional organizations may also review complaints of unethical practices when asked. The code of ethics of the American Sociological Association (1997) is available in print and is posted on the ASA Web site ( Its standards concerning the treatment of human subjects include federal regulations and ethics guidelines emphasized by most professional social science organizations: Chambliss/Schutt, Making Sense of the Social World 4th edition © 2012 SAGE Publications

6 How Should “No Harm to Subjects” Be Interpreted?
Does it mean that subjects should not be at all harmed psychologically as well as physically? That they should feel no anxiety or distress whatsoever during the study or after their involvement ends? Should the possibility of any harm, no matter how remote, deter research? As simple as these guidelines may seem, they are difficult to interpret in specific cases and harder yet to define in a way agreeable to all social scientists. Consider the question of possible harm to the subjects of a well-known prison simulation study (Haney, Banks, & Zimbardo 1973). The study was designed to investigate the impact of social position on behavior—specifically, the impact of being either a guard or a prisoner in a prison, a “total institution.” The researchers selected apparently stable and mature young male volunteers and asked them to sign a contract to work for 2 weeks as a guard or a prisoner in a simulated prison. Within the first 2 days after the prisoners were incarcerated by the “guards” in a makeshift basement prison, the prisoners began to be passive and disorganized, while the guards became verbally and physically aggressive. Five “prisoners” were soon released for depression, uncontrollable crying, fits of rage, and in one case a psychosomatic rash; on the sixth day the researchers terminated the experiment. Through discussions in special postexperiment encounter sessions, feelings of stress among the participants who played the role of prisoner seemed to be relieved; follow-up during the next year indicated no lasting negative effects on the participants and some benefits in the form of greater insight. Would you ban such experiments because of the potential for harm to subjects? Does the fact that the experiment yielded significant insights into the effect of a situation on human behavior—insights that could be used to improve prisons—make any difference (Reynolds 1979:133–139)? Do you believe that this benefit outweighed the foreseeable risks? Chambliss/Schutt, Making Sense of the Social World 4th edition © 2012 SAGE Publications

7 The Requirement of Informed Consent Is More Difficult to Define Than It First Appears
Consent must be given by persons who are competent to consent. Whom might not be included in this group? Consent must be voluntary. Does this include research on prisoners? How about research on students? Might there be an element of coercion? Participants must be fully informed about the nature of the research. What if explaining the research affects how subjects behave or answer questions in the study? Can you conduct deceptive research? Not all harm is foreseeable and therefore disclosable to participants. The researcher’s actions and body language must help to convey his verbal assurance that consent is voluntary. Children cannot legally give consent to participate in research, but they must have the opportunity to give or withhold their assent to participate in research to which their legal guardians have consented (Sieber 1992). Fully informed consent may also reduce participation in research and, because signing consent forms prior to participation may change participants’ responses, produce biased results (Larson 1993:114). Experimental researchers whose research design requires some type of subject deception try to get around this problem by withholding some information before the experiment begins but then debriefing subjects at the end. In the debriefing, the researcher explains to the subject what happened in the experiment and why and responds to questions (Sieber 1992:39–41). However, even though debriefing can be viewed as a substitute in some cases for securing fully informed consent prior to the experiment, if the debriefed subjects disclose the nature of the experiment to other participants, subsequent results may still be contaminated (Adair, Dushenko, & Lindsay 1985). Chambliss/Schutt, Making Sense of the Social World 4th edition © 2012 SAGE Publications

8 Maintaining Confidentiality and Anonymity Is Not Always Straightforward
Procedures such as locking records and creating special identifying codes must be used to minimize the risk of access by unauthorized persons. Laws allow research records to be subpoenaed and typically require the reporting of child abuse. The standard of confidentiality does not apply to observation in public places and information available in public records. Social media and digital technologies blur the lines between public and private behavior. Is behavior on websites such as Facebook and Twitter public or private? Chambliss/Schutt, Making Sense of the Social World 4th edition © 2012 SAGE Publications

9 Do the benefits outweigh the risks?
The evaluation of ethical issues in a research project should be based on a realistic assessment of the overall potential for harm and benefit to research subjects. Do the benefits outweigh the risks? The extent to which ethical issues are a problem for researchers and their subjects varies dramatically with the type of research design. Survey research, in particular, creates few ethical problems. In fact, researchers from Michigan’s Institute for Survey Research interviewed a representative national sample of adults and found that 68% of those who had participated in a survey were somewhat or very interested in participating in another; the more times respondents had been interviewed, the more willing they were to participate again. Presumably they would have felt differently if they had been treated unethically (Reynolds 1979:56–57). On the other hand, some experimental studies in the social sciences that have put people in uncomfortable or embarrassing situations have generated vociferous complaints and years of debate about ethics (Reynolds 1979; Sjoberg 1967). Chambliss/Schutt, Making Sense of the Social World 4th edition © 2012 SAGE Publications 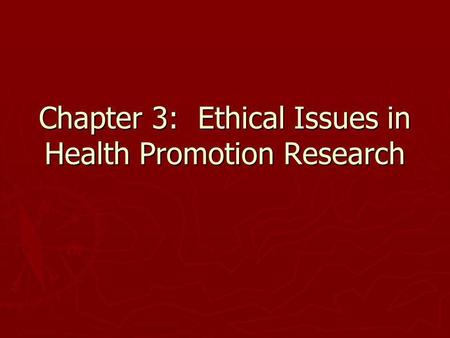 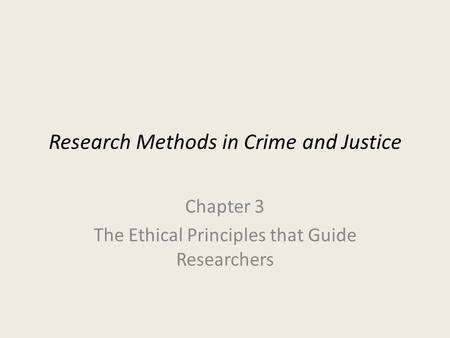 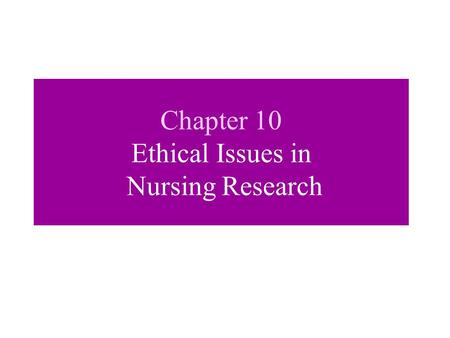 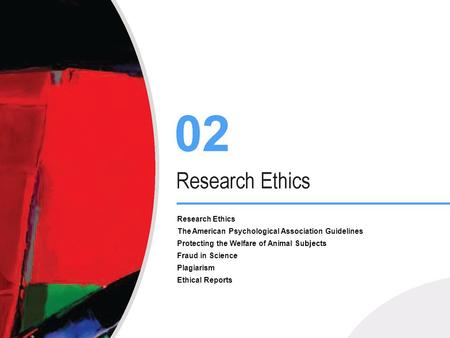 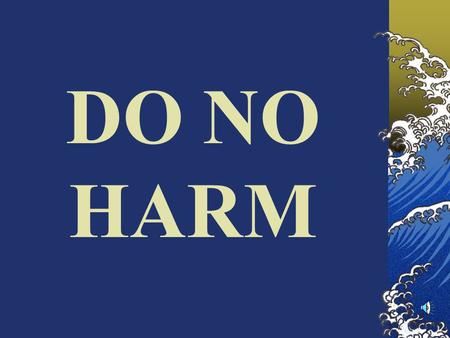 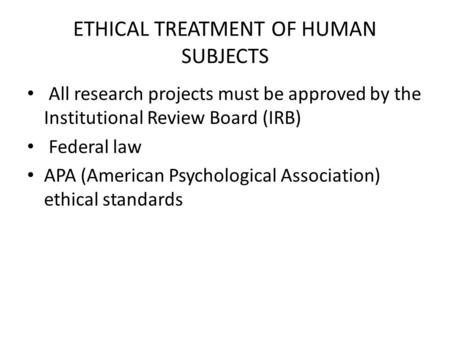 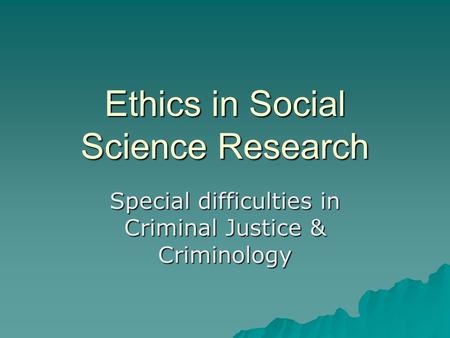 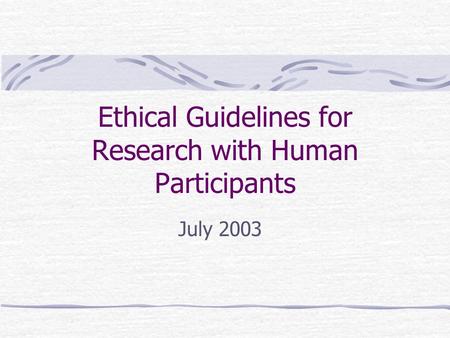 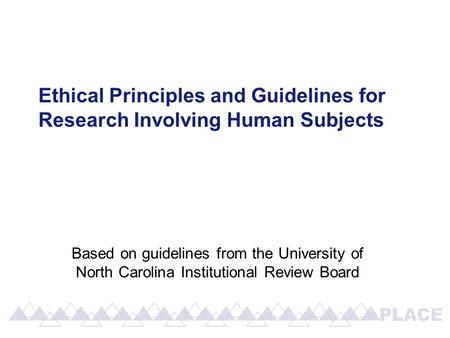 Ethical Principles and Guidelines for Research Involving Human Subjects Based on guidelines from the University of North Carolina Institutional Review. 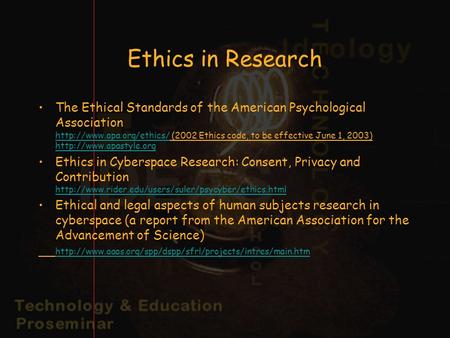 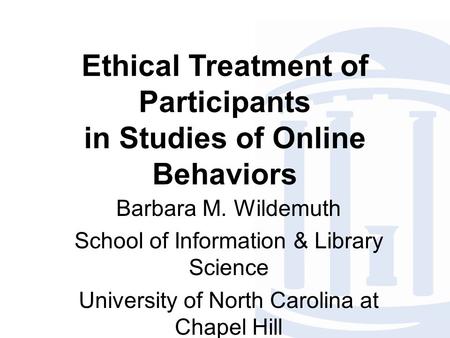 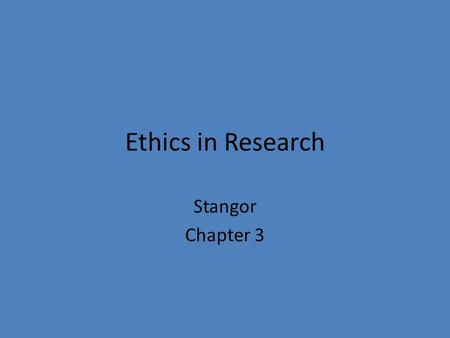 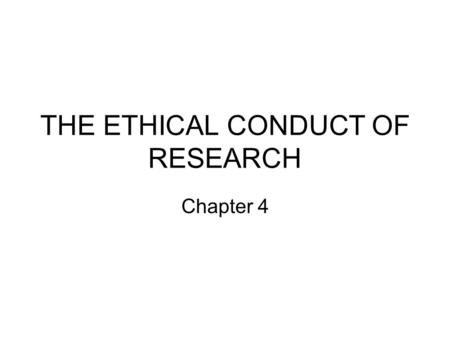 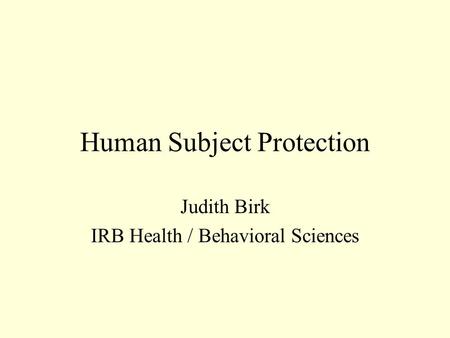 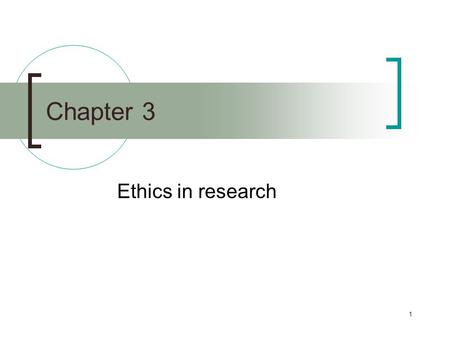 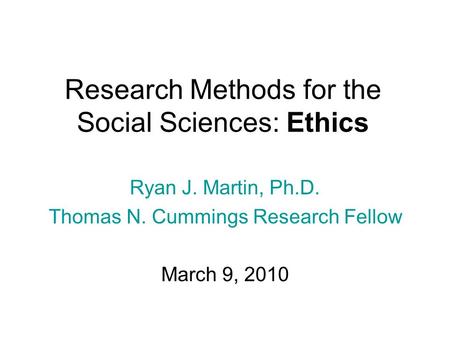 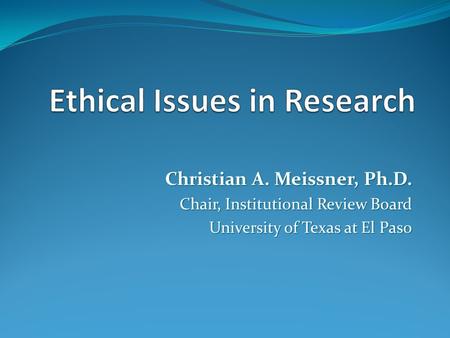 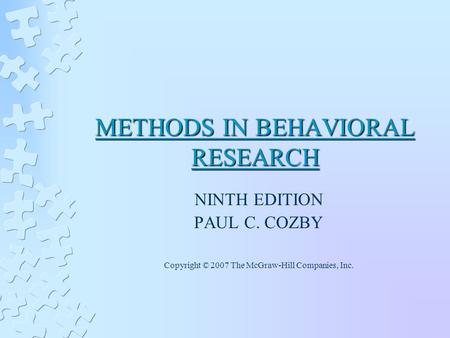 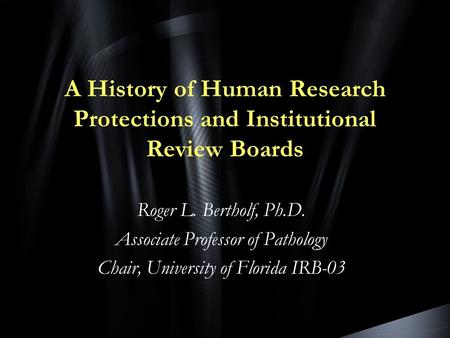