Presentation on theme: "World Biomes Marine. Distribution The marine biome is the biggest biome in the world. It covers about 70% of the earth. It includes five main oceans:"— Presentation transcript:

2 Distribution The marine biome is the biggest biome in the world. It covers about 70% of the earth. It includes five main oceans: the Pacific, Atlantic, Indian, Arctic, and Southern; as well as many smaller Gulfs and Bays. Marine regions are usually very salty

7 Plants I One reason the ocean is very important is because of all the algae. If it weren't for marine algae we would not be able to breathe. Through photosynthesis, marine plants and algae provide much of the worlds oxygen supply and take in huge amounts of carbon dioxide. This absorption of carbon dioxide may be a useful tool in reducing the severity of climate change.

8 Plants II One type of marine algae is kelp. Kelp is important because it provides shelter and food for a lot of sea creatures. Kelp is also used by humans for many products, including toothpaste and ice cream. Kelp also serves as a buffer by absorbing energy from waves before the waves hit the shoreline. Another important marine plant is phytoplankton. These are tiny plants that serve as food to many of the ocean creatures from the smallest of fish to large whales. Some scientists estimate that phytoplankton provide the earth with almost half of its oxygen. Marine plants live in the sunlit zone of the ocean because they need energy from the sun for photosynthesis.

11 Animals I The Earth's oceans are home to most of the planet’s biodiversity. Here we can find molluscs, fish, whales, crustaceans, bacteria, fungi, sea anemones and many other animals. Animals have to deal with unique living situations in all zones of the ocean. The ocean is a salty place that is often cold. Many animals have special adaptations to handle this difficult environment.

12 Animals II Most marine mammals have blubber to survive in the cold water, but sea otters are unique because they don’t have blubber. Instead, they have fur more dense than any other mammal, with up to one million hairs per square inch. Most people have ten times less than that on their heads! The ocean can also support very large life forms. The blue whale is the biggest animal on earth. It can be over 100 feet long. Blue whales are so large that a small person could crawl through their main arteries, and 20 people could stand on their tongue!

13 Animals III Animals in the deep sea also live in a tough environment. One creature, the anglerfish, deals with the darkness by attracting its prey with a lure lit up by light producing bacteria. When the prey is drawn to the lure, the anglerfish captures it with its big mouth for a tasty meal.

31 People I People everywhere heavily use the ocean for food, medicines, oil, other resources, and recreation. Demand for resources from the ocean is damaging ecosystems and depleting these resources. Around the world, unsustainable fishing practices, including the poisoning and dynamiting of coral reefs, catching unwanted fish, dragging nets on the sea floor, over fishing popular species, and fishing in critical reproductive areas are making the problem worse.

33 People II Pollution is also harming the marine ecosystem. Pollutants, like fertilizers and household products put down the drain make their way through streams and rivers into estuaries, and eventually to the ocean where they badly disrupt the ecosystem and can cause harm to sea life. Oil spills are also a large source of pollution in the oceans. Many organizations and people are currently trying to help protect and clean our oceans.

Download ppt "World Biomes Marine. Distribution The marine biome is the biggest biome in the world. It covers about 70% of the earth. It includes five main oceans:" 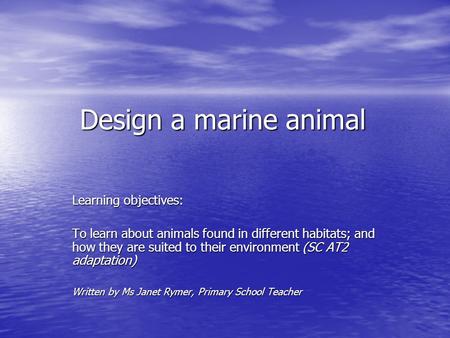 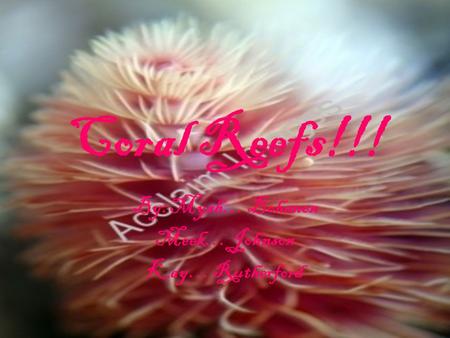 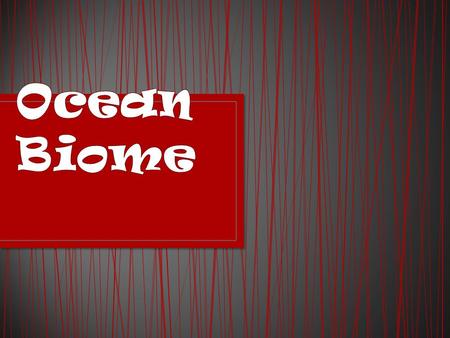 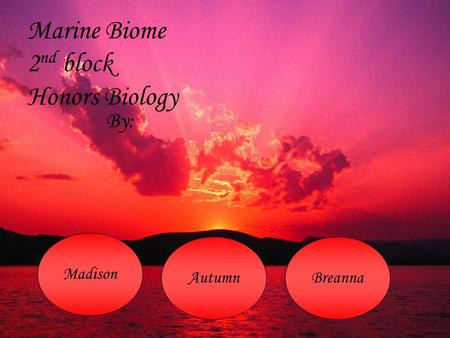 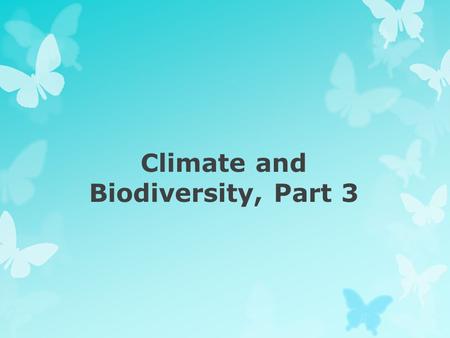 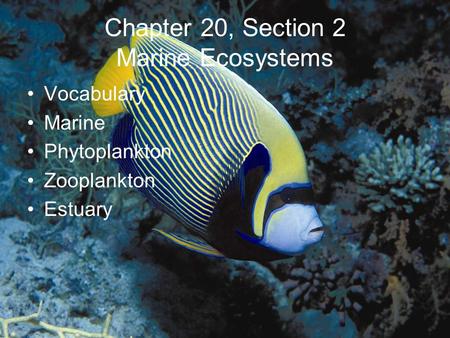 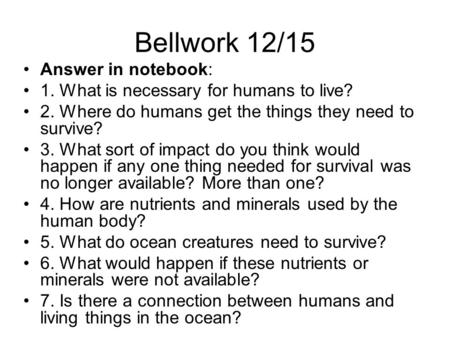 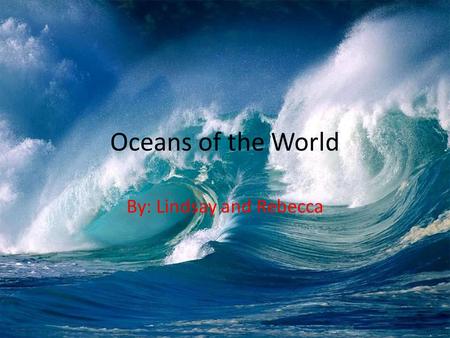 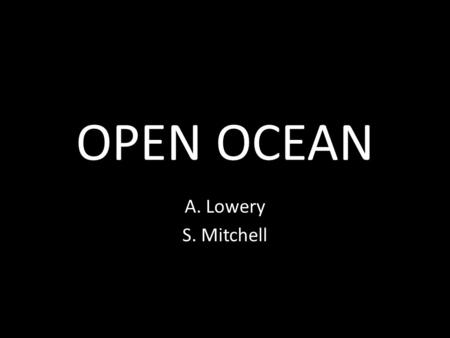 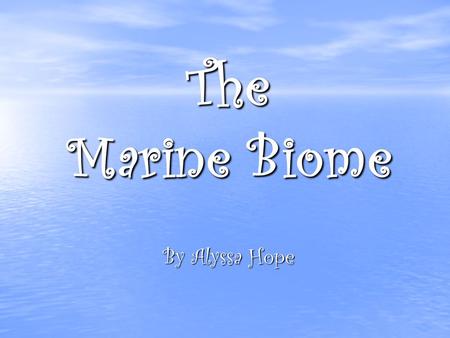 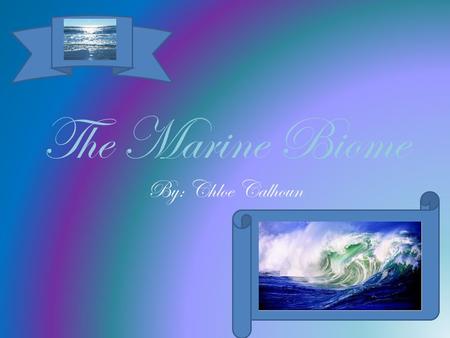 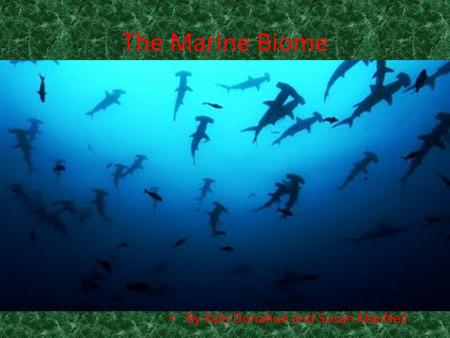 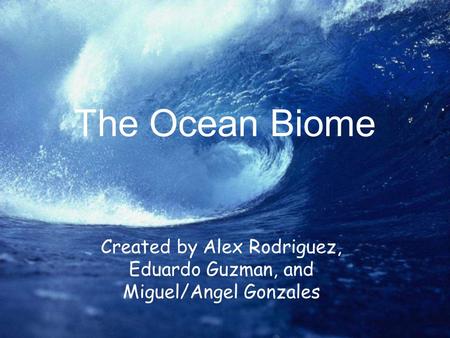 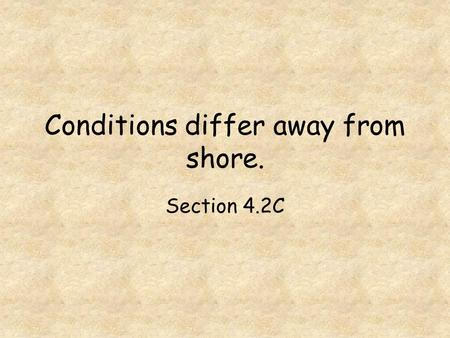 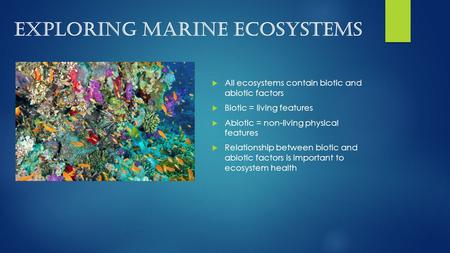 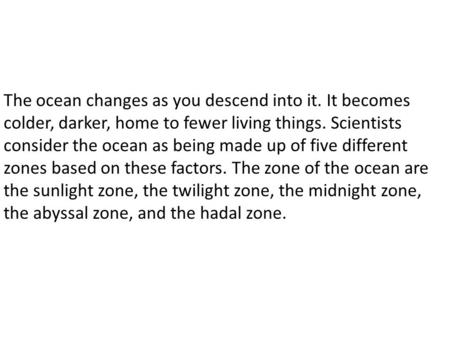