2 An increase in waterborne diseases could possibly be alleviated by
A. Adequate sewage treatment facilities for growing populations B. Very rapid growth of large cities C. Sufficient fuelwood D. Both a & b

6 The ____ is the average number of children each parent must have in order to replace themselves in the population.

8 Growth rates for different parts of the world vary depending on the level of development of the region. Which region is experiencing the biggest increase in population? A. North America B. Asia C. Europe D. Australia

12 A ___ helps demographers predict which age groups will experience the most growth.

14 Between 1880 and 1930 human population doubled due to
A. The Industrial Revolution B. A combination of high birth rates and low death rates C. Improvements in societal infrastructure and services D. All of the above

16 A shortage of ____ can decrease the food supply available to a growing population.

22 Educating women worldwide has lowered birthrates partly because
A. Educated women contribute less to their family income. B. Educated women need to bear many children to ensure that some will survive. C. Educated women may learn family- planning techniques D. All of the above

26 Which of the following is a reason that wood is considered a limited resource in many developing countries? A. Wood is used in place of money to buy food B. Excess wood is used to construct shantytowns C. Fuelwood allows people to purify their water by boiling it D. People cut down trees faster than they can grow

27 D. People cut down trees faster than they can grow

28 An increase in population could result from increased birth rate, increased ____, or immigration.

30 During the ___ stage of demographic transition, the birth rate drops and the size of the population begins to decrease.

32 One way to stabilize the world population is to reduce ____ by improving women’s status and educational opportunities.

34 Countries that have entered the third stage of demographic transition are most probably characterized by A. Social conditions that favor smaller families B. Weak or developing economies C. Populations with a high proportion of young people D. Death rates that far exceed birth rates

38 Because birth rates have begun to fall, Earth’s population will
A. Increase for a short time and then decrease to current levels B. Soon stabilize at the level it is today- about 6 billion C. Stabilize somewhere around 9 billion by 2050 D. Begin to decrease until it reaches 5 billion

40 Which of the following makes it difficulty to reduce population growth?
A. High literacy rates result in women wanting to have more children. B. Many people have low literacy and limited access to health care. C. Population sizes will not decline until some people start having to do without food and other necessities of life D. Many people live in cities, where large families are an advantage.

41 B. Many people have low literacy and limited access to health care.

42 During Stage 2 of a population’s demographic transition, the death rate
A. Remains the same B. Is zero C. Increases D. decreases

45 B. Most countries have replacement-level fertility rates

46 Which of the following is not a strategy that could slow population growth?
A. Economic incentives B. Limiting education for women C. Legal punishments D. Public advertising

47 B. Limiting education for women

52 Which of the following would not cause population to decrease in a region?
A. Increased emigration B. Increased immigration C. Decreased survivorship D. Decreased fertility rates

54 A population pyramid is created by
A. Graphing the distribution of ages in a population at a specific time B. Studying a group of people and noting when each member dies C. Calculating the number of children a woman gives birth to in her lifetime D. Estimating the demand for services within a community

58 Less-developed countries suffer more from rapid population growth because they are the less likely to have the __ to support the population. A. Infrastructure B. Fertility rates C. Cultural values D. Family-planning methods

60 The study of human population patterns is called_______ 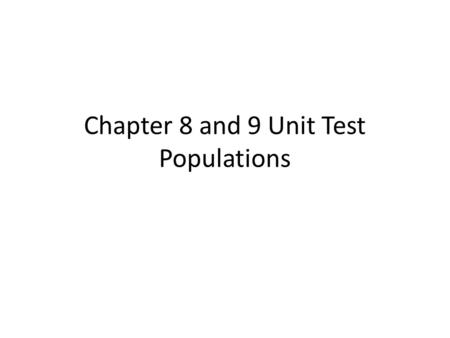