12 Electron Dots For Anions
Nonmetals will have many valence .electrons. They will gain electrons to fill outer shell. P P-3

14 Ionic Bonding Anions and cations are held together by opposite charges. Ionic compounds are called salts. Simplest ratio is called the formula unit. The bond is formed through the transfer of electrons. Electrons are transferred to achieve noble gas configuration.

17 Ionic Bonding All the electrons must be accounted for! Ca P

28 Properties of Ionic Compounds
Crystalline structure. A regular repeating arrangement of ions in the solid. Ions are strongly bonded. Structure is rigid. High melting points- because of strong forces between ions.

30 Do they Conduct? Conducting electricity is allowing charges to move.
In a solid, the ions are locked in place. Ionic solids are insulators. When melted, the ions can move around. Melted ionic compounds conduct. First get them to 800ºC. Dissolved in water they conduct.

31 Metallic Bonds How atoms are held together in the solid.
Metals hold onto their valence electrons very weakly. Think of them as positive ions floating in a sea of electrons.

32 Sea of Electrons + Electrons are free to move through the solid.
Metals conduct electricity. + 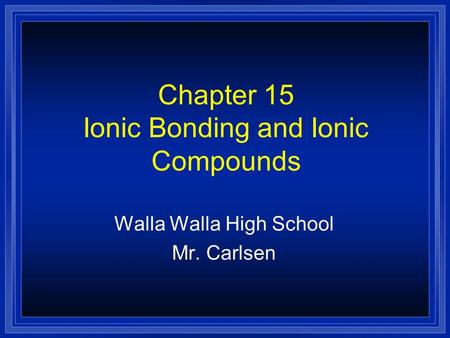