1 doc.: IEEE 802.11-06/1381r0 Submission September 2006 Assaf Kasher, IntelSlide 1 No use of Identity Matrix when extension LTFs are used Notice: This document has been prepared to assist IEEE 802.11. It is offered as a basis for discussion and is not binding on the contributing individual(s) or organization(s). The material in this document is subject to change in form and content after further study. The contributor(s) reserve(s) the right to add, amend or withdraw material contained herein. Release: The contributor grants a free, irrevocable license to the IEEE to incorporate material contained in this contribution, and any modifications thereof, in the creation of an IEEE Standards publication; to copyright in the IEEE’s name any IEEE Standards publication even though it may include portions of this contribution; and at the IEEE’s sole discretion to permit others to reproduce in whole or in part the resulting IEEE Standards publication. The contributor also acknowledges and accepts that this contribution may be made public by IEEE 802.11. Patent Policy and Procedures: The contributor is familiar with the IEEE 802 Patent Policy and Procedures, including the statement "IEEE standards may include the known use of patent(s), including patent applications, provided the IEEE receives assurance from the patent holder or applicant with respect to patents essential for compliance with both mandatory and optional portions of the standard." Early disclosure to the Working Group of patent information that might be relevant to the standard is essential to reduce the possibility for delays in the development process and increase the likelihood that the draft publication will be approved for publication. Please notify the Chair as early as possible, in written or electronic form, if patented technology (or technology under patent application) might be incorporated into a draft standard being developed within the IEEE 802.11 Working Group. If you have questions, contact the IEEE Patent Committee Administrator at.http:// ieee802.org/guides/bylaws/sb-bylaws.pdfstuart.kerry@philips.compatcom@ieee.org Date: 2006-09-04 Authors:

2 doc.: IEEE 802.11-06/1381r0 Submission September 2006 Assaf Kasher, IntelSlide 2 Comment CID 10057,11934, 12172 Y194320.3.3.2.2.4 DTDT T here is a description that "Qk shall not be an identity matrix when extension HT-LTFs are present." I understand that someone may worry about transient response, but it would depending on implementors effort. Replace "shall" with "should" or "may". And if we think transient response using direct mapping may cuase proble, add specification on this. N194320.3.3.2.2.4 DTDT Feels that the text "'Q_k shall not be an identity matrix when extension HT-LTFs are present (N_ESS >0)." is not required. IMHO, if Q_k is an identity matrix, it would mean that the extension streams get switched off when transmitting data portion and data streams gets switched off when EHTLTFs are transmitted. Kindly remove the text from the subclause. Y194420.3.3.2.2.4 STST No explanation is provided why an identity matrix should not be used for Q with extension HT- LTFs Provide an explanation

3 doc.: IEEE 802.11-06/1381r0 Submission September 2006 Assaf Kasher, IntelSlide 3 Proposal: Reject Using the Identity Matrix as a spatial mapping when transmitting a packet with extension LTFs will mean that transmit chains are turned on and off in the middle of a training sequence and at the beginning of the data. We would need to specify transition times, EVM during training, etc. and develop a method to test these. This would add unnecessary complexity to the standard, compared with the gain in allowing transmission with the identity matrix as spatial mapping matrix. 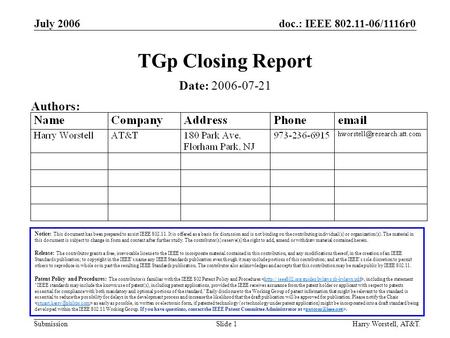 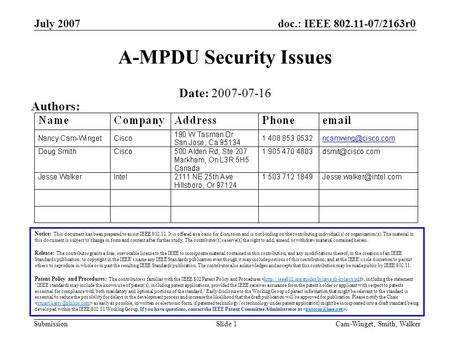 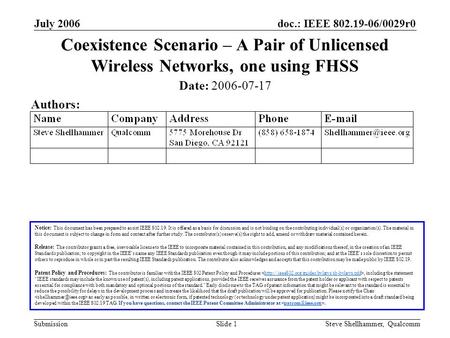 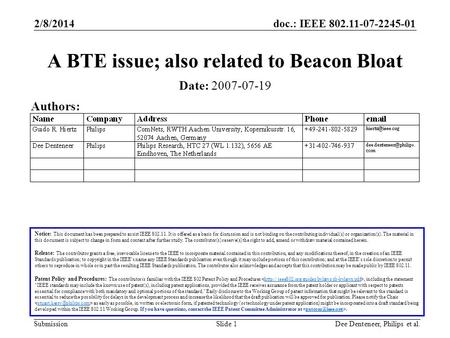 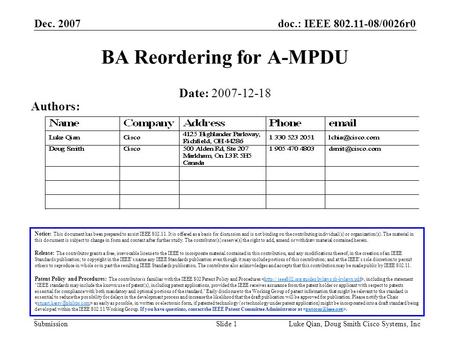 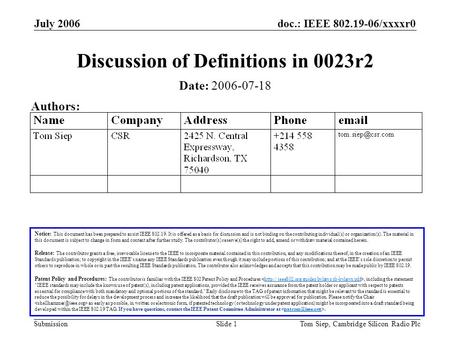 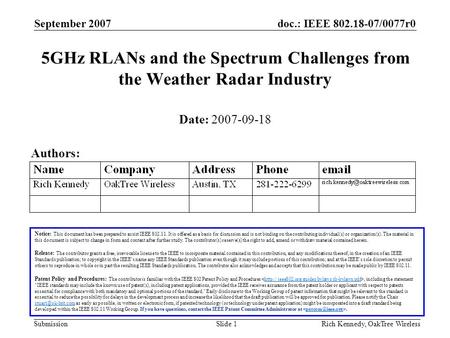 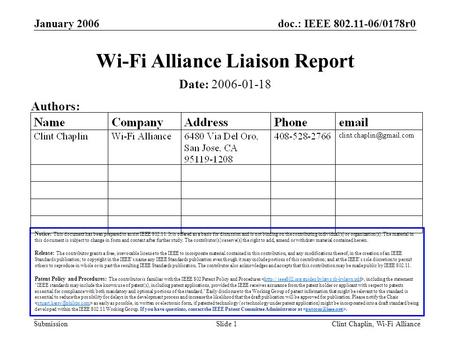 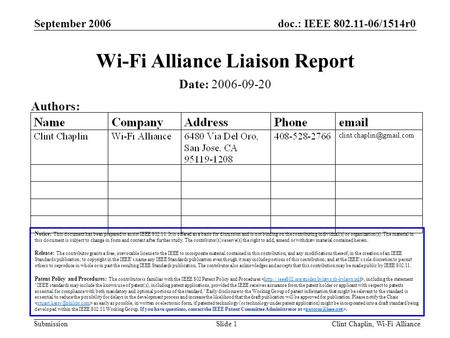 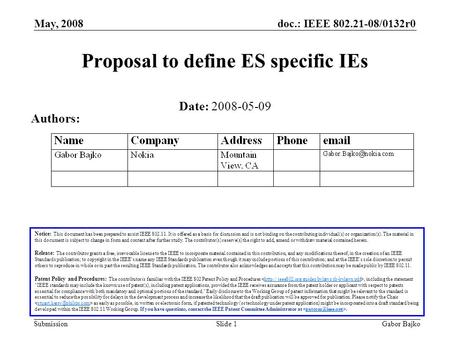 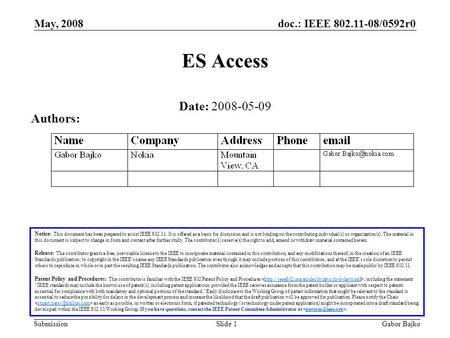 Doc.: IEEE /0592r0 Submission May, 2008 Gabor BajkoSlide 1 ES Access Notice: This document has been prepared to assist IEEE It is offered. 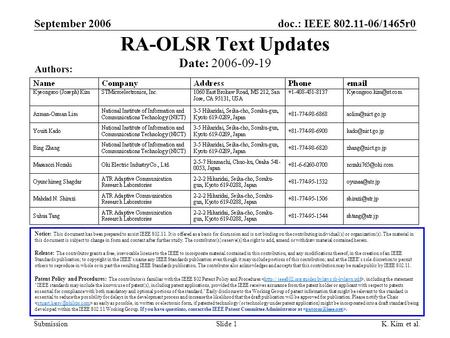 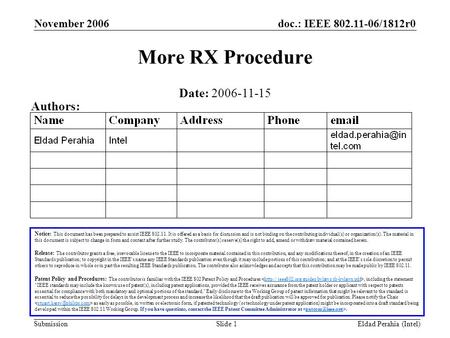 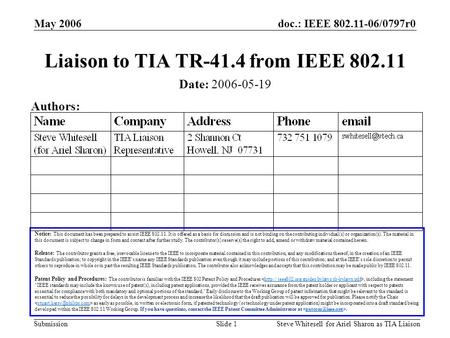 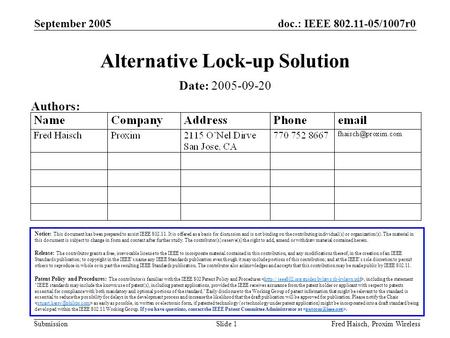 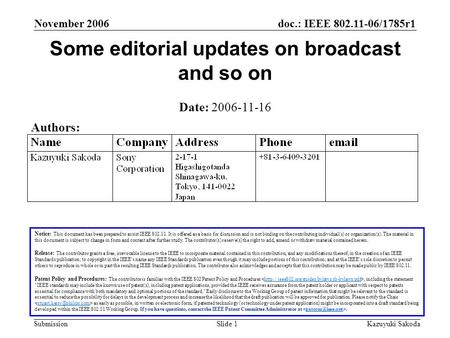 Doc.: IEEE /1785r1 Submission November 2006 Kazuyuki SakodaSlide 1 Some editorial updates on broadcast and so on Notice: This document has been. 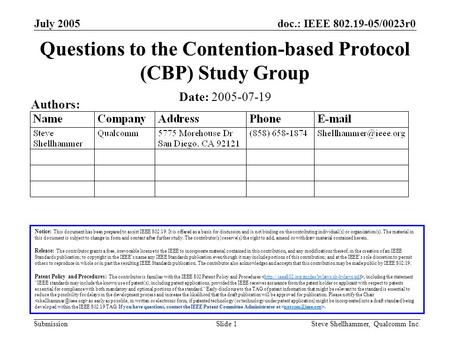 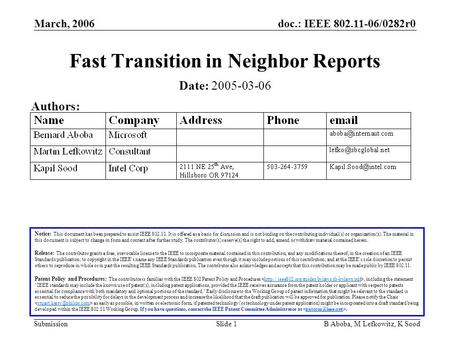 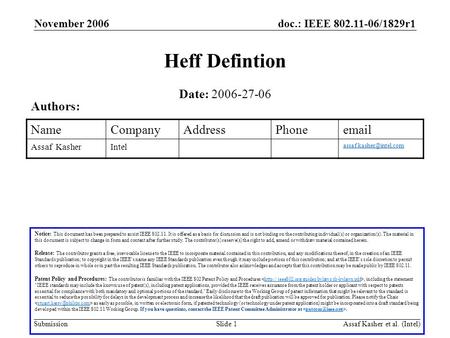 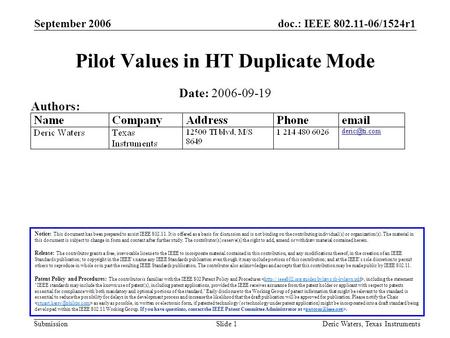