Presentation on theme: "THE DIVIDE BETWEEN THE AMERICAN COLONISTS AND BRITAIN GROWS, AND EVENTUALLY LEADS TO WAR. The Road to Lexington and Concord."— Presentation transcript:

1 THE DIVIDE BETWEEN THE AMERICAN COLONISTS AND BRITAIN GROWS, AND EVENTUALLY LEADS TO WAR. The Road to Lexington and Concord

2 After the Tea Party…. Britain is angry with the colonists for destroying British property. We must master them, or totally leave them to themselves as aliens.-King George Britain chose to master.

4 Colonial Response to the Intolerable Acts I wish we could arouse the continent,- Sam Adams The Intolerable Acts did just that: Other colonies offered Massachusetts support (money, food). Committees of Correspondence called for a meeting of delegates to discuss what to do next. In September of 1774 delegates from all colonies except Georgia met in Philadelphiathis became know as the First Continental Congress. 1.Delegates voted to ban trade with Britain 2.They also agreed to begin training troops (GA agreed to be a part of the actions despite sending a delegate).

6 Between War and Peace The Colonies hoped that the boycott on British goods would force a repeal of the harsh actsbecause boycotts had worked in the past. This time Parliament stood firm and even created more restrictions on colonial trade (also sent more troops). By the end of 1774, Colonists were ready to fight. John Hancock headed the Committee of Safetywhich had power to call out the militia. Troops continued to train.

7 Between War and Peace Most colonial leaders thought Britain would back off once the colonies showed force, and there would be no war. Patrick Henry thought differently: Gentlemen may cry peace, peacebut there is no peace. The war is actually begun! The next gale that weeps from the north will bring to our ears the clash of resounding arms! Our brethren are already in the field! Why should we idle here?...I know not what course others may take. But as for me, give me liberty or give me death.

8 Spies on Both Sides Spies were being used by both sides. Samuel Adams built a spy network to keep watch over British activities. The British had spies too. They were the Americans that stayed loyal to Britain. British spies learned that supplies were being stored in Concord (20 miles north of Boston) and that John Hancock and Samuel Adams were in Lexington. General Gage (man sent by Britain to govern Mass. When Intolerable Acts were passed) ordered his troops to destroy the supplies and arrest Hancock and Adams.

9 Midnight Ride of Paul Revere The Sons of Liberty had prepared for this moment. Paul Revere and William Dawes were charged with spreading the news of British movement. Revere arranged a system of signals to alert the colonists that the British were on the move.

10 Lexington and Concord At dawn 700 British soldiers reached Lexington. They found Captain John Parker and about 70 Militiamen waiting. The British ordered the Americans to drop their weaponsthey refused. No one knows who fired the first shotbut within minutes, 8 militiamen lay dead.

11 Lexington and Concord The British moved to Concord where they destroyed the military supplies of the colonists. 4,000 militiamen and minutemen (colonists) arrived in the area and lined the road from Concord to Lexingtonthey fired at the redcoats as they were retreating. Lexington and Concord became the first battles of the Revolutionary War.

12 Shot heard round the world Ralph Waldo Emerson later wrote that the colonial troops had fired the shot heard round the world. Americans would now have to choose sides and back up their political opinions by force of arms. Those who sided with Britain were called LOYALISTS. Those who sided with rebels were called PATRIOTS. The conflict between sides divided communities, families and friends. The war was on!

Download ppt "THE DIVIDE BETWEEN THE AMERICAN COLONISTS AND BRITAIN GROWS, AND EVENTUALLY LEADS TO WAR. The Road to Lexington and Concord." 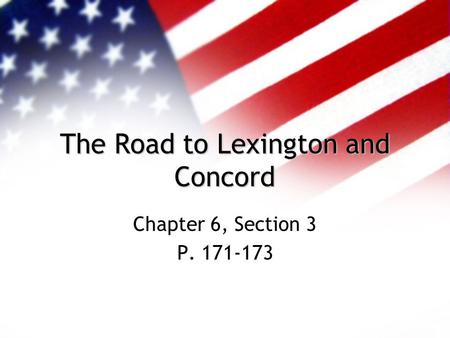 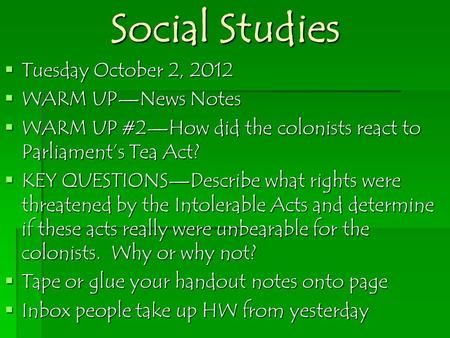 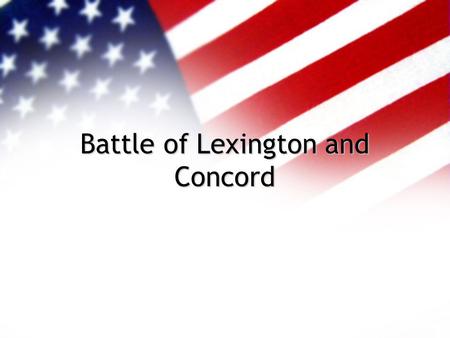