8 Silverites Free Silver- the unlimited coining of silver dollars to increase the money supply Bland-Allison Act of Required the federal government to purchase and coin more silver Vetoed by president Rutherford B. Hayes Did not want to create inflation Sherman Silver Purchase Act- increased the amount of silver the government was required to purchase every month Required the treasury to buy silver with notes that could be redeemed with silver and gold Repealed by the Silver Purchase Act in 1893

11 Populist Party “ The People’s Party”
New political party consisting of farmers’ alliance, southern democrats, some labor unions, and a few small reform parties Believed that government was run by the industrialists The gap between the rich and the poor was growing “Corruption dominates the ballot-box, the legislatures, the congress, and touches even the ermine of the bench [i.e., the courts]…. From the womb… of governmental injustices we breed the two great classes-tramps and millionaires”

13 Populist Party Had success in the South and the West Depression 1893
Won seats in state legislature and U.S. house Won over many southern democrats Nominated James Weaver for President in 1892 22 elect. Votes (5 states) Depression 1893 Repeal of the Sherman Silver Purchase Act Democrats split into two groups: Gold-bugs and Silverites 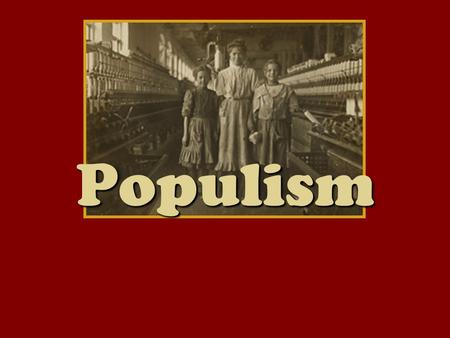