3 Categorizing Storage Devices
The computer file system we have discussed must be stored somewhere. Storage devices hold data, even when the computer is turned off - unlike RAM. The physical material that actually holds data is called a storage medium. The hardware that writes data to or reads data from a storage medium is called a storage device. The two primary storage technologies are magnetic and optical.

5 Magnetic Storage Devices - How Magnetic Storage Works
A magnetic disk's medium contains iron particles, which can be polarized—given a magnetic field—in one of two directions (north or south) Each particle's direction represents a 1 (on) or 0 (off), representing each bit of data that the CPU can recognize. A disk drive uses read/write heads containing electromagnets to create magnetic fields over the medium.

7 As the medium rotates, the head writes the data.

8 Magnetic Storage Devices - Formatting
Before a magnetic disk can be used, it must be formatted—a process that maps the disk's surface and determines how data will be stored. During formatting, the drive creates circular tracks around the disk's surface, then divides each track into sectors. The OS organizes sectors into groups, called clusters, then tracks each file's location according to the clusters it occupies.

10 Magnetic Storage Devices - Disk Areas
When a disk is formatted, the OS creates four areas on its surface: Boot sector – stores the master boot record, a small program that runs when you first start (boot) the computer File allocation table (FAT) – a log that records each file's location and each sector's status Root folder – enables the user to store data on the disk in a logical way Data area – the portion of the disk that actually holds data

12 Magnetic Storage Devices - Hard Disks
Hard disks use multiple platters, stacked on a spindle. Each platter has two read/write heads, one for each side. Hard disks use higher-quality media and a faster rotational speed than diskettes. Hard disks spin at 3,600 to 10,000 rpm. A floppy spins at 300 rpm.

13 Magnetic Storage Devices - Disk Capacities
Hard disks store large amounts of data. New PCs feature hard disks with capacities of 10 GB and higher. High-capacity floppy disks offer capacities up to 250 MB and the portability of standard floppy disks. HiFD and SuperDisk store 200 and 120 MB and are compatible with a normal floppy disk. Zip can store MB, but is a different shaped disk.

14 Optical Storage Devices – How Optical Storage Works
An optical disk is a high-capacity storage medium. An optical drive uses reflected light to read data. To store data, the disk's metal surface is covered with tiny dents (pits) and flat spots (lands), which cause light to be reflected differently. When an optical drive shines light into a pit, the light cannot be reflected back. This represents a bit value of 0 (off). A land reflects light back to its source, representing a bit value of 1 (on).

16 Optical Storage Devices – CD-ROM
In PCs, the most commonly use optical storage technology is called Compact Disk Read-Only Memory (CD-ROM). A standard CD-ROM disk can store up to 650 MB of data, or about 70 minutes of audio. Once data is written to a standard CD-ROM disk, the data cannot be altered or overwritten.

17 Optical Storage Devices – CD-ROM Speeds and Uses
Early CD-ROM drives were called single speed, and read data at a rate of 150 KBps. (Hard disks transfer data at rates of 5 – 15 MBps). CD-ROM drives now can transfer data at speeds of up to 7800 KBps. Data transfer speeds are getting faster. CD-ROM is typically used to store software programs. CDs can store audio and video data, as well as text and program instructions.

18 Optical Storage Devices - DVD-ROM
A variation of CD-ROM is called Digital Video Disk Read-Only Memory (DVD-ROM), and is being used in place of CD-ROM in many newer PCs. Standard DVD disks store up to 9.4 GB of data—enough to store an entire movie. Dual-layer DVD disks can store up to 17 GB. DVD disks can store so much data because both sides of the disk are used, along with sophisticated data compression technologies.

22 File Compression File compression technology shrinks files so they take up less disk space. Using a compression utility, you can shrink multiple files into a single archive file. Utilities such as Windows' DriveSpace enable you to compress the entire contents of your hard disk. 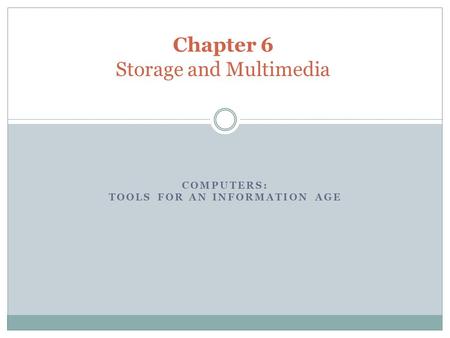 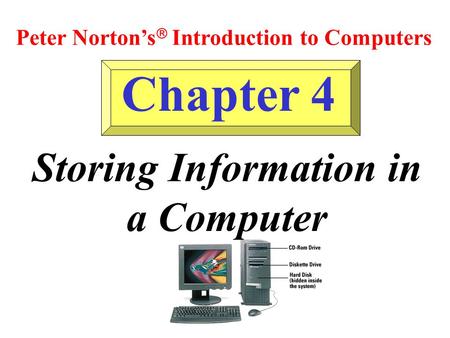 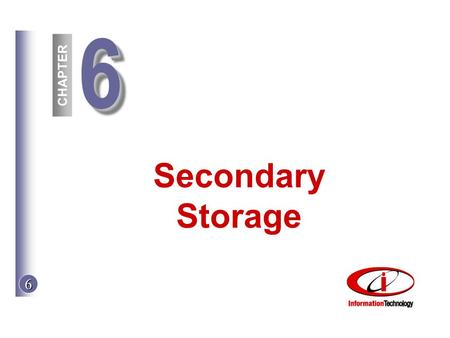 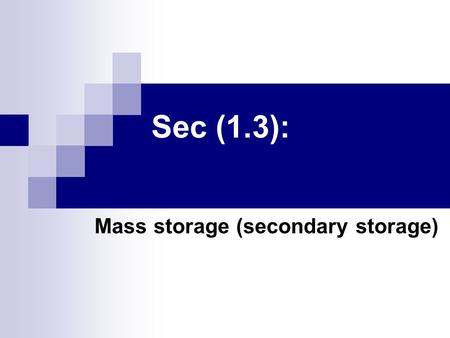 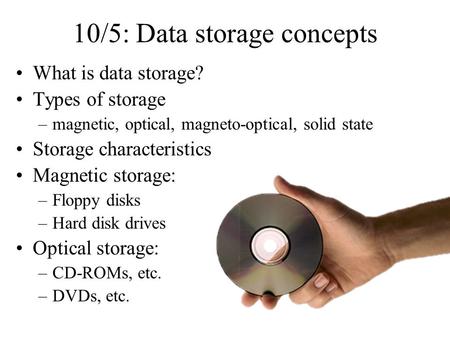 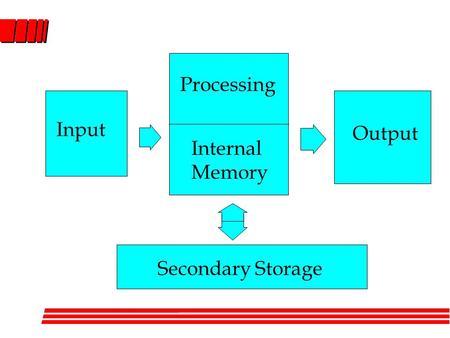 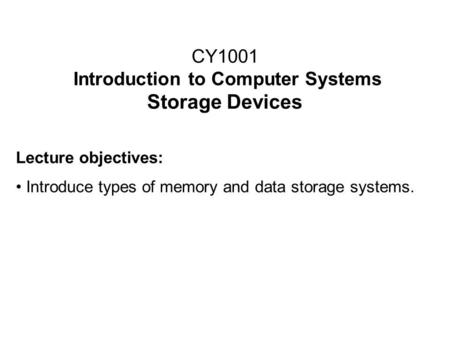 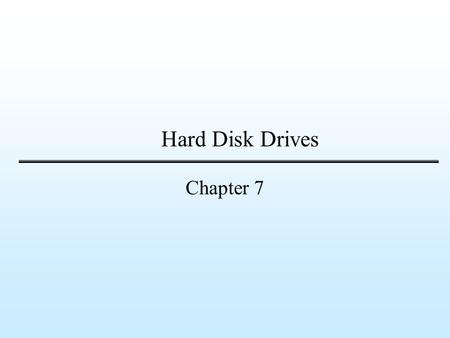 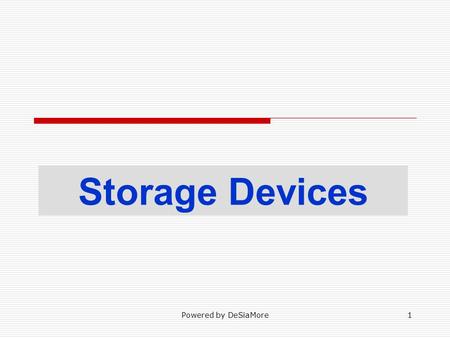 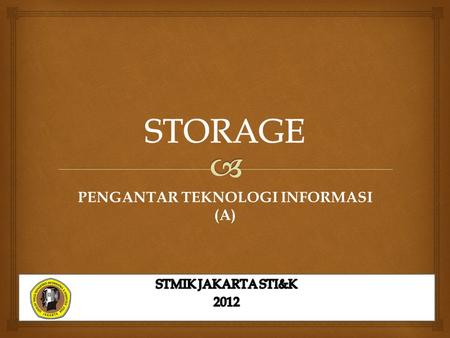 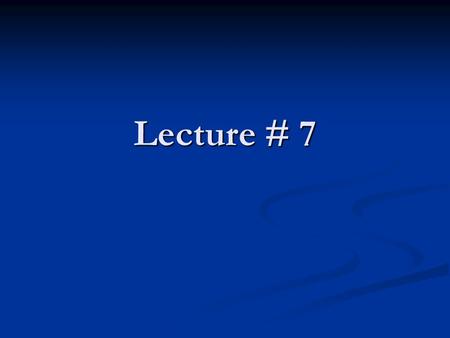 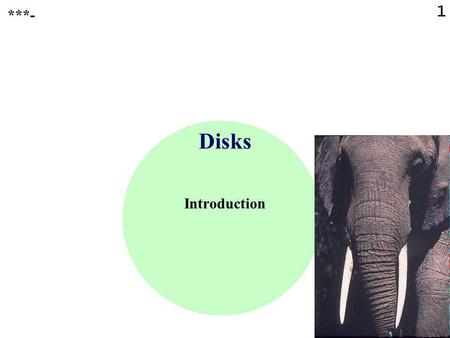 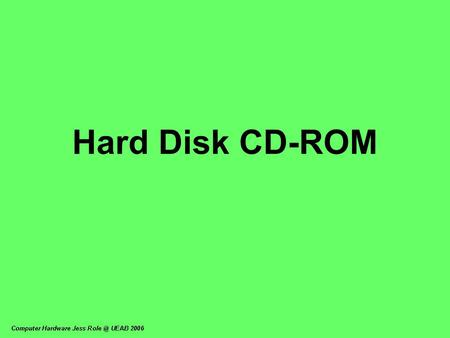 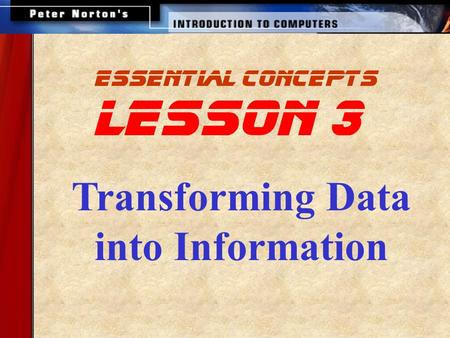