Presentation on theme: "Main Function: This communication system controls and coordinates functions throughout the body and responds to internal and external stimuli. Our nervous."— Presentation transcript:

2 Main Function: This communication system controls and coordinates functions throughout the body and responds to internal and external stimuli. Our nervous system allows us to feel pain.

9 Parts of a Neuron 1.Cell body: contains nucleus & most of the cytoplasm 2.Dendrites: projections that bring impulses into the neuron to the cell body. 3.Axon: long projection that carries impulses away from cell body 1 3 2

11 Sensory Neuron carry impulses from sense organs to spinal cord & brain Fun Fact: Where can the largest cells in the world be found? The giraffe’s sensory and motor neurons! Some must bring impulses from the bottom of their legs to their spinal cord several meters away!!

14 Nerves work together with muscles for movement. An impulse begins when one neuron is stimulated by another neuron or by the sense organs. The impulse travels down the axons of Sensory neurons to the brain cells called Interneurons. The brain will then send an impulse through motor neurons to the necessary muscle or organs, telling it to contract.

15 A reflex is an involuntary response that is processed in the spinal cord not the brain. Reflexes protect the body before the brain knows what is going on. Reflex Arc

19 Cerebrum (forebrain) Largest part of the brain, surface is greatly folded; divided into right and left hemispheres Voluntary or conscious activities of the body- learning, judgment Cerebellum (hindbrain) 10% of brain volume; 5% of brain’s neurons Coordinates and balances the actions of the muscles (develop as a child) Medulla Oblongata (Brain Stem) attached to the spinal cord at the base of the brain; contains gray matter that receives signals from the spinal cord Controls involuntary actions like blood pressure (vasometer centre), heart rate (cardiac centre), breathing (respiratory centre), and swallowing

20 Parts of the Cerebrum alcohol and the brain

21 Parts of the cerebrum memory game

24 Thalamus contains paired masses of gray matter that are arranged into bodies called nuclei and act as a relay station – receives sensation of touch, pain, heat and cold and info from the muscles

27 Located in the brainstem; the pons contains bundles of axons travelling between the cerebellum and the rest of the CNS (bridge) Functions with the medulla in regulation of breathing and has reflex centres involved in head movement

29 ventricles cavities within the brain that produce and store cerebrospinal fluid (cushions the brain) include lateral, third and fourth

30 The cerebral cortex is the thin outer layer of the brain (covers cerebrum) often referred to as gray matter (billions of cells). Enables us to experience sensation, voluntary movement and all thought processes associated with consciousness.

Download ppt "Main Function: This communication system controls and coordinates functions throughout the body and responds to internal and external stimuli. Our nervous." 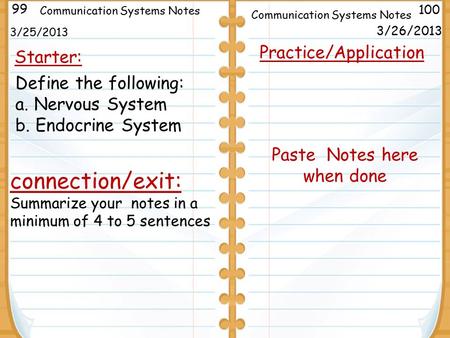 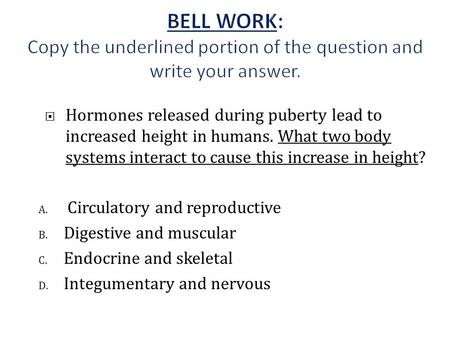 Hormones released during puberty lead to increased height in humans