4 EUROPEANS Between 1870 and 1920, about 20 million Europeans arrived in the United States Before 1890, most were from western and northern Europe- “old immigrants” After 1890, most came from southern and eastern Europe “new immigrants” All were looking for opportunity

5 CHINESE Between 1851 and 1882, about 300,000 Chinese arrived on the West Coast Some were attracted by the Gold Rush, others went to work for the railroads, farmed or worked as domestic servants An anti-Chinese immigration act by Congress curtailed immigration after 1882 Many Chinese men worked for the railroads

6 JAPANESE In 1884, the Japanese government allowed Hawaiian planters to recruit Japanese workers The U.S. annexation of Hawaii in 1898 increased Japanese immigration to the west coast By 1920, more than 200,000 Japanese lived on the west coast

7 THE WEST INDIES AND MEXICO Between 1880 and 1920, about 260,000 immigrants arrived in the eastern and southeastern United States from the West Indies They came from Jamaica, Cuba, Puerto Rico, and other islands Mexicans, too, immigrated to the U.S. to find work and flee political turmoil – 700,000 Mexicans arrived in the early 20 th century

8 A RRIVAL AT E LLIS I SLAND

9 T HE J OURNEY TO A MERICA A. Traveled by steamship to America 1. trip across Atlantic took 1 week 2. trip across Pacific took 3 weeks B. Traveled in “Steerage” or the cheapest accommodations in a ship’s cargo hold C. Conditions:

11 R EGISTRY R OOM “Great Hall” 189 feet long and 102 feet wide Officials in the Great Hall decided whether each person could enter the country right away or whether that person's case required further review.

12 M EDICAL P ROCESS The first test was a "six- second physical." A uniformed doctor looked for any signs of illness or contagious diseases. If someone was considered a risk to the public health, his or her clothes were marked by a piece of chalk with an identifying letter. An "X" denoted insanity.

13 L EGAL INSPECTION Where were you born? Are you married? What is your occupation? Have you ever been convicted of a crime? How much money do you have? What is your destination?

14 Legal detainees lived in a dormitory room on the third floor. They might wait a few days or even a month. Then their case would be reviewed in the Hearing Room.

15 S TAIRS OF SEPARATION Immigrants who were being detained were often brought down the center aisle. People who were traveling west or south walked down the right side of the staircase. Those going to New York City or to the north walked down the left side.

16 E LLIS I SLANDE LLIS I SLAND A. Ellis Island: immigration station in New York Harbor which decided whether or not immigrants would be admitted to America B. 17 million immigrants passed through 1. Had to pass a physical health exam 2. Had to pass a government inspector’s test a. able to work? b. have some money? c. never been convicted of a felony?

18 A NGEL I SLANDA NGEL I SLAND A. Angel Island: immigration station in the San Francisco Bay which decided whether or not immigrants would be admitted to America B. Between 1910-1940 50,000 Chinese enter U.S. 1. much more harsh 2. longer decision time

21 FRICTION DEVELOPS While some immigrants tried to assimilate into American culture, others kept to themselves and created ethnic communities Committed to their own culture, but also trying hard to become Americans, many came to think of themselves as Italian-Americans, Polish- Americans, Chinese- Americans, etc Some native born Americans disliked the immigrants unfamiliar customs and languages – friction soon developed Chinatowns are found in many major cities

24 YOUR ASSIGNMENT! You’ve just immigrated to the United States. Write a postcard to your family back home and tell them these 3 things: Why did you immigrate? What was it like going through Angel or Ellis Island? How were you treated by Americans when you arrived? Write this on the journal entry! 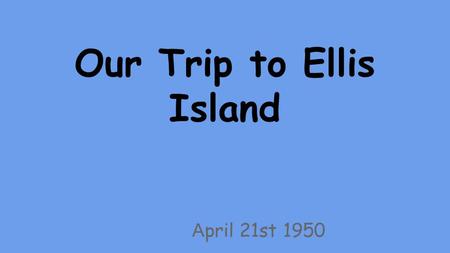 Our Trip to Ellis Island A pril 21st The Passage Most immigrants came from Eastern and Southern Europe. Some came to escape poverty and religious. 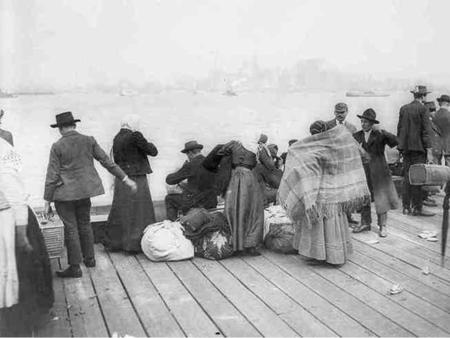 Through Ellis Island and Angel Island: The Immigrant Experience 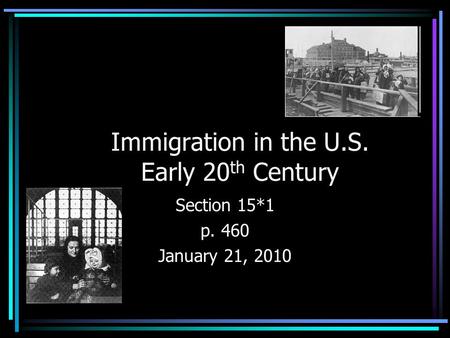