The Beginning of the Cold War: s

2 The Cold War starts before the end of WWII
In 1945, the three big Allied nations of Great Britain, the Soviet Union, and the USA met to discuss what to do with Germany after the war This conference was called the Yalta Conference The Leaders: Stalin Churchill Roosevelt

3 Reconstruction in Germany
The three powers agreed to divide up Germany between the three of them. France would also get a part After Nazi controlled areas in E. Europe were liberated by the Allies – the Soviet Union took over the countries as a buffer between itself and Germany. —these countries became known as Soviet satellite nations

5 Satellite Nations The Soviet Satellites (including East Germany) were forced to be Communist nations after WWII The Long Telegram This was a message sent by George Kennan that advised the U.S. on how to deal with the Soviet Union Conclusion: actions should be taken against the Soviets In response to the Long Telegram, Winston Churchill gave a speech, saying an Iron Curtain had fallen in Europe He meant that there was now a wall dividing the West and democracy and the East and Communism

8 The Policy of Containment
Created by President Harry Truman Marshall Plan Created by General George Marshall Plan to financially support Europe in order to prevent the spread of Communism 13 billion in food, cash, and loans sent from USA to democratic European nations Satellite Nations could not accept aid

10 Soviet Reaction The Soviets regarded the Marshall Plan as an attempt by the Americans (and capitalists) to take over the world. So, they closed off their parts of Europe from the rest of the world This included West Berlin, which was now an island of democracy in Eastern Europe

11 The Importance of Berlin
The Soviets by 1948 blocked off their part of the world from everyone else Purpose was to block off the capitalists from the USSR, including Berlin Berlin Airlift People were starving to death in West Berlin due to the blockade Truman had an airlift to keep people alive Berlin Wall Built by the Soviets in 1961; separated East and West Berlin for 28 years

14 The Berlin Airlift Over 200,000 flights made in about a year
13,000,000 tons of food flown in An elephant weighs about 8 tons Results: Cold War worsens East and West Germany split up officially Formation of NATO and the Warsaw Pact

18 Nuclear Threats USA has nuclear ability by 1945.
Soviets get it by 1949 1950: H bomb in US 1952: H bomb in USSR Theory of Deterrence: Countries tell everyone that they are willing to respond to any attacks with an equal counter-attack

21 Competition Between the Superpowers
1953- Eisenhower’s administration coined the term brinkmanship Willing to go to war at any minute Both the US and USSR were involved in an arms race Both countries wanted the best science and education programs 1957 Soviet launched Sputnik, the first satellite 1958- US launches satellite THIS WILL LEAD TO THE SPACE RACE 1960 the CIA authorized spying missions over the USSR

23 So Now… USA and the USSR: Superpowers on edge
Superpower: a state powerful enough to influence events around the world Mutual alliances will force the entire world into war again if someone is attacked Coming up: China is falling to Communism

24 Memo to President Truman
Goal: As a group, you will write a memo to President Truman advising for/against the development of the H bomb You Must: Write in complete sentences Use the information from today in order to provide at least 4 reasons to support your stance Why should the USA support or not support the development of this weapon? Ideas to consider: devastation caused by the less powerful atomic bomb, containment, the actions of the USSR in recent years, the recent loss of China to Communism

Download ppt "The Beginning of the Cold War: s" 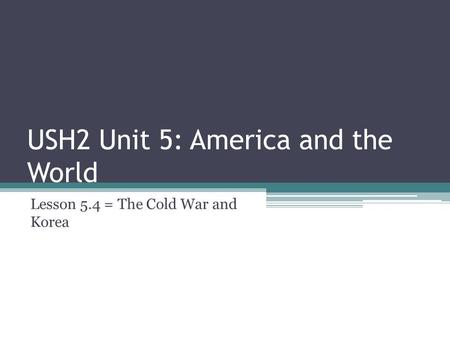 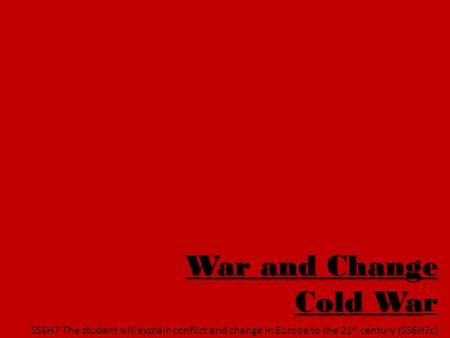 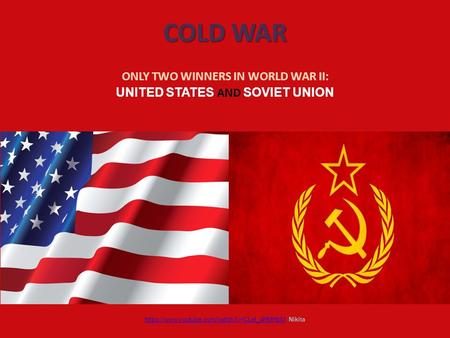