2 What is ecology?  The scientific study of interactions among organisms and between organisms and their environment is ecology.  The biosphere contains the combined portions of the planet in which all of life exists, including land, water, and atmosphere.

3 Recycling in the Biosphere  Matter can be recycled through the biosphere because biological systems do not use up matter, they transform it. –The matter is assembled into living tissue or passed out of the body as waste products  Biological systems pass the same molecules around again and again within the biosphere. –O 2 you breath may have been same O 2 a dinosaur used millions of years ago

5 Water Cycle  During the water cycle, water molecules enter the atmosphere as water vapor, a gas. This occurs through evaporation, which is the changing of liquid water into water vapor. –It can also evaporate from the leaves of plants during transpiration

7  Water also seeps into the soil, where it enters plants through the roots. AND THE WATER CYCLE BEGINS ALL OVER AGAIN!

8  The food you eat provides energy and chemicals that keep you alive. All the chemical substances that an organism needs to sustain life are its nutrients.

10 Carbon Cycle  Carbon is a key ingredient in living tissues. It forms animal skeletons, is an important component of the atmosphere, and is taken up by plants in photosynthesis.  In the atmosphere, carbon is present as carbon dioxide (CO 2 ). Carbon dioxide is released into the air by volcanic activity, burning of fossil fuels, and by decomposition of organic matter (matter from living organisms)  Animals CO 2 as a waste product of cellular respiration.

13 Nitrogen Cycle  All organisms require nitrogen to make amino acids, which in turn are used to make proteins.  Nitrogen makes up 78% of the Earth’s atmosphere, but guess what? Even though nitrogen is in every breath of air we take, our bodies can’t use this nitrogen….So how is nitrogen transformed into a form our bodies can use?

14  Friendly, bacteria, known as nitrogen-fixing bacteria live in the soil and on roots of plants called legumes.  These bacteria convert nitrogen gas (N 2 ) into ammonia (NH 3 ) in a process called nitrogen fixation.  Other bacteria convert ammonia into nitrates and Nitrites (NO 3 - & NO 2 - ) which consumers take in when they eat plants! Nitrogen Cycle

15  When organisms die, decomposers return nitrogen to the soil as ammonia. Some soil bacterial convert nitrates into nitrogen gas by a process called denitrification.

16 Phosphorus Cycle  Phosphorus is essential to living organisms because it forms part of important life-sustaining molecules such as DNA and RNA.  Phosphorus does not enter the atmosphere. It remains mostly on land in rock and soil minerals and in ocean sediments.  It exists as inorganic phosphate.

17 Phosphorus Cycle  As rocks and sediments wear down and are washed into rivers and streams, the phosphate dissolves. Plants absorb it.  It is then bound into organic compounds which cycle through the food web, from producers to consumers, and to the rest of the ecosystem.

18 Nutrient Limitation  If a nutrient is in short supply, it will limit an organism’s growth.  Farmers add nutrients to the soil in the form of fertilizers, which contain nitrogen, phosphorus, and potassium.  Open oceans are usually considered nutrient-poor environments.  Nitrogen is considered a limiting nutrient because it cycles very slowly an is scarce in the ocean.

19 Nutrient Limitation  Phosphorus is a limiting nutrient in freshwater environments.  When aquatic environments receive a large supply of limiting nutrient, such as from fertilizer run-off, there can be a sudden increase in algae and other producers. This results in an algal bloom. –These blooms of algae can disrupt the equilibrium of an ecosystem. 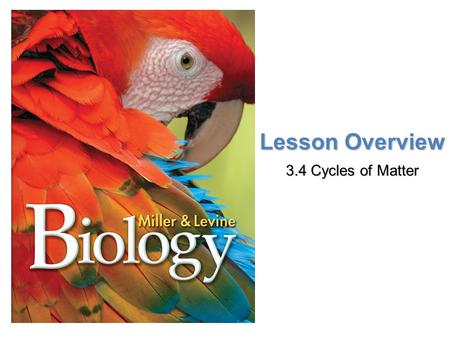