Ch. 13.3 Farmers and the Populist Movement. Section Objectives 1.Identify the problems farmers faced and their cooperative efforts to solve them. 2. Explain.

Presentation on theme: "Ch. 13.3 Farmers and the Populist Movement. Section Objectives 1.Identify the problems farmers faced and their cooperative efforts to solve them. 2. Explain."— Presentation transcript:

1 Ch. 13.3 Farmers and the Populist Movement

2 Section Objectives 1.Identify the problems farmers faced and their cooperative efforts to solve them. 2. Explain the rise and fall of the Populist Party.

3 One American’s Story Mary Lease was a teacher on the Kansas plains that joined the Farmers’ Alliance movement. Farmers transformed the Great Plains into the “breadbasket of the nation.”

4 1. Farmers Unite to Address Common Problems Farmers faced banks closing mortgages on their lands, and high railroad shipping prices. A. Economic Distress Greenbacks were retired and became worthless. Farmers had to pay back loans with dollars that were worth more than what they borrowed. The Bland-Allison Act required the government to buy and coin 2-4 million dollars each month in silver.

5 B. Problems With the Railroads A lack of competition among railroads led to higher prices on shipping. Farmers couldn’t grow enough crops to pay the interest on their loans. C. The Farmers’ Alliances Oliver Hudson Kelley- Started an organization of farmers that became known as the Grange. Grange- A social outlet and educational forum of farmers that would battle the railroad in the late 19 th century.

6 Farmers’ Alliances- They sent lecturers from town to town to educate people on loans, railroads, and banks.

7 2. The Rise and Fall of Populism Populism- Political movement demanding that people have a bigger say in government, supported by farmers and laborers. A. The Populist Party Platform Increase in money supply, graduated income tax, and a federal loan program. The Populist presidential candidate gained 10 percent of the vote, five senators elected (West), and three governors.

8 B. The Panic of 1893 Railroad construction expanded faster than markets. The panic led to a depression 3 million people lost their jobs. C. Silver or Gold Republicans supported in the Northeast. Democrats supported in the South and West. bimetallism- Money system in which the gov’t would give citizens gold or silver in exchange for paper money. gold standard- backing paper money with gold.

9 There was more silver than gold backing currency with silver and gold would make more money available. (less value on the dollar) gold standard would provide a more stable currency.

11 The End of Populism

Download ppt "Ch. 13.3 Farmers and the Populist Movement. Section Objectives 1.Identify the problems farmers faced and their cooperative efforts to solve them. 2. Explain." 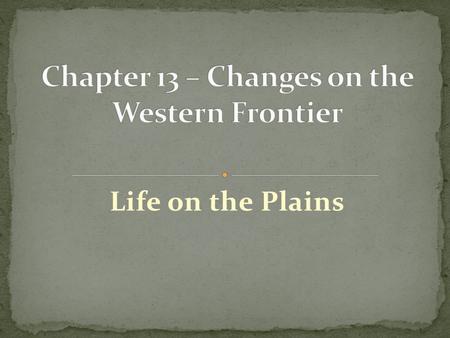