4 Main Idea 1: Many problems threatened the Roman Empire, leading one emperor to divide it in half. At its height the Roman Empire included all the land around the Mediterranean Sea. The empire became too large to defend or govern efficiently. Emperor Diocletian divided the empire to make it more manageable.

5 Fall of the Roman Empire The large size of the empire made it hard to govern. Barbarian invasions weakened the empire. Corruption, or the decay of people’s values, in politics led to inefficiency in government. Bribes and threats were used to achieve goals. Wealthy citizens began to leave Rome, making life more difficult for those who remained.

6 Problems in the Empire Emperors gave up territory because they feared the empire had become too large. Yet new threats to the empire were appearing. Because so many people were needed for the army, no one was left to farm the land. Disease and high taxes threatened Rome’s survival.

7 Division of the Empire Emperor Diocletian divided the empire because it was too big for one person to rule. Emperor Constantine reunited the two halves shortly after he took power. He moved the capital east, into what is now Turkey. The new capital was called Constantinople. Power no longer resided in Rome.

8 Main Idea 2: Rome declined as a result of invasions and political and economic problems. In the late 300s, a group called the Huns invaded Europe. They were from Central Asia. The Goths fled from the Huns into Rome. They moved into western Roman territory. Additional attacks by more invaders made the empire weak.

10 The Sacking of Rome The Huns pushed a group called the Goths into Rome. The Goths had nowhere else to go. The Goths destroyed Rome after Rome quit paying them not to attack. The Goths sacked, or destroyed, Rome in 410.

11 The Empire in Chaos The Goths’ victory encouraged other groups to invade the western half of the empire. The Vandals invaded Spain, crossed into northern Africa, and destroyed Roman settlements. Led by Attila, the Huns raided most of the Roman territory in the east. Roman emperors became weak, and military leaders took power. They did not protect the empire, however. A Barbarian general overthrew the last weak emperor in Rome and named himself king in 476. This event is considered the end of the western Roman Empire.

12 Many factors contributed to Rome’s fall. The large size of the empire made it hard to govern. Barbarian invasions weakened the empire. Corruption, or the decay of people’s values, in politics led to inefficiency in government. Bribes and threats were used to achieve goals. Wealthy citizens began to leave Rome, making life more difficult for those who remained.

14 Justinian Justinian wanted to reunite the old Roman Empire. He conquered Italy and much land around the Mediterranean. He examined Rome’s laws and organized them into a legal system called the Justinianic Code. –Removed out-of-date and unChristian laws –Simplified Roman law to give fair treatment to all He made two enemies who would have run him out of Constantinople if his wife, Theodora, had not convinced him to stay. –Theodora was smart and powerful, and she advised Justinian on how to end the riots.

17 Eastern society was called the Byzantine Empire. Eastern people studied Greek, not Latin. People in the east and west began to interpret elements of Christianity differently. Eastern priests could get married, but western priests could not. Religious services were performed in Greek in the east and in Latin in the west. The east broke away from the west and formed the Eastern Orthodox Church. The people of the eastern empire created a new society that was very different from society in the west.

18 Illustrative Timeline Find the event for the specific dates Draw something that represents the event –Number on the timeline –Picture below and explanation above –Include color If you have a better way to make your timeline work, that is okay. 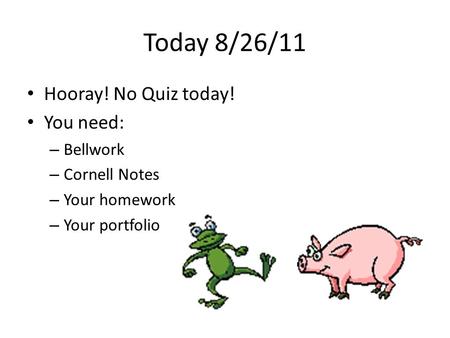 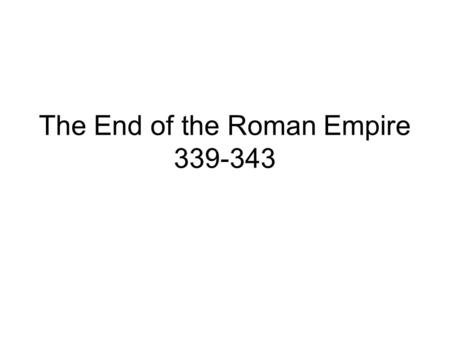 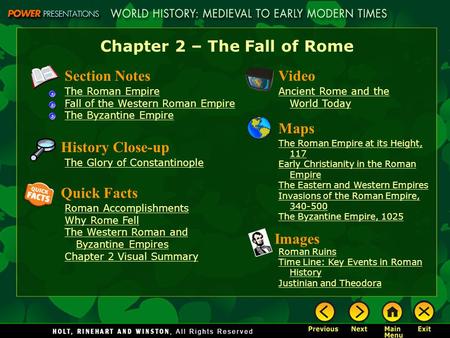 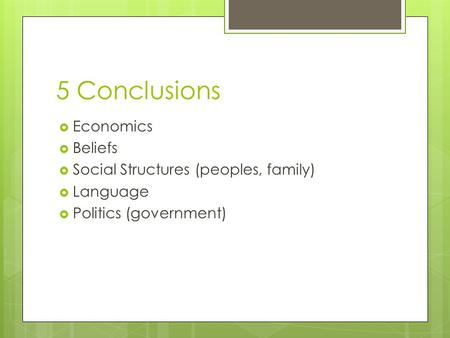 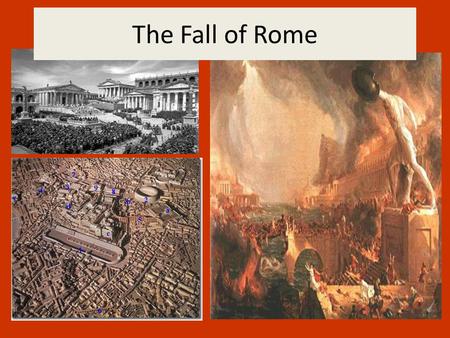 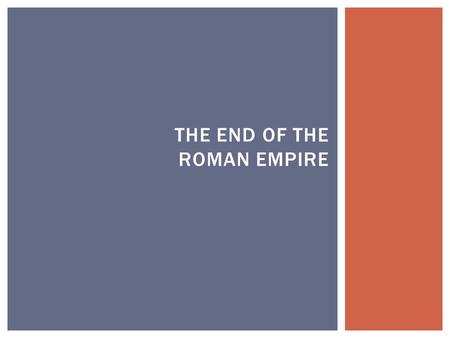 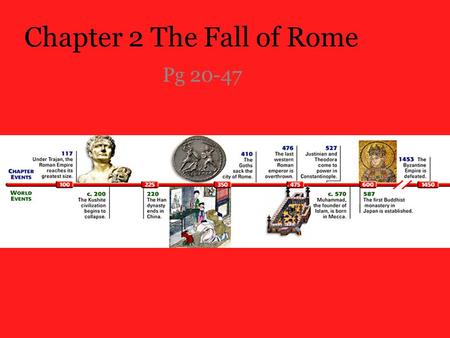 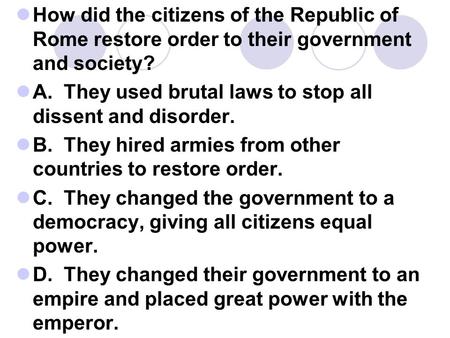 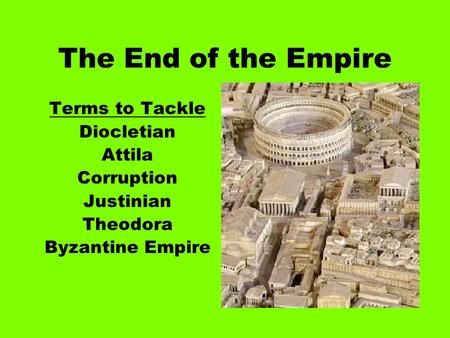 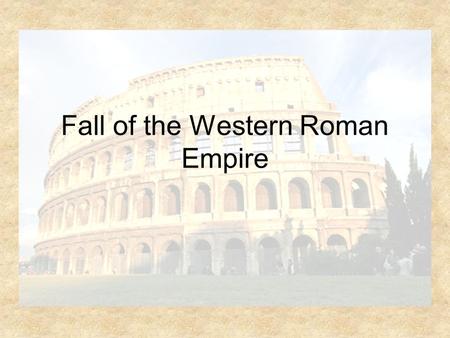 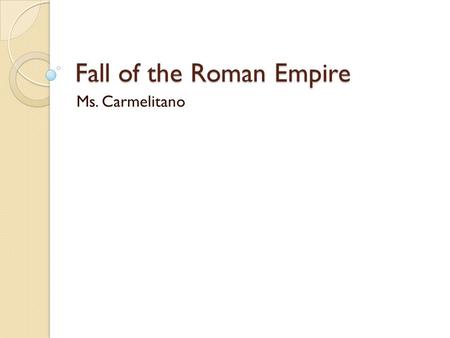 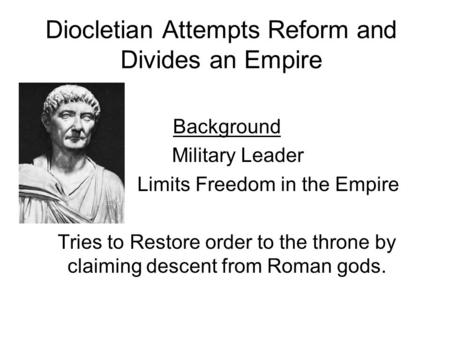 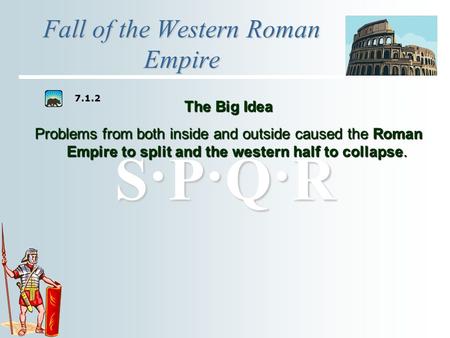