Presentation on theme: "Earth’s Atmosphere It’s a gas baby! Or is it?...."— Presentation transcript:

2 Earth's Atmosphere Thin Gaseous envelope
Figure 1.2 The atmosphere is a thin layer of air that protects the Earth’s surface from extreme temperatures and harmful sun rays

5 Atmospheric Gases (Mixture of gases, solids, and liquids)
Atmosphere is changing with the introduction of pollutants; increasing human energy use is increasing the amount of carbon dioxide Pollutants mix with oxygen and other chemicals to form smog Aerosols include solids such as dust, salt, and pollen Liquids include water droplets and droplets from volcanoes

6 Five Layers of the Atmosphere

9 Lower Layers of Atmosphere
Troposphere: lowest layer – extends up to 10km; contains 99% of the water vapor and 75% of the atmospheric gases The troposphere is the first layer above the surface and contains most clouds and half of the Earth's atmosphere. Weather occurs in this layer. Most of the layer’s heat is from Earth Temperature cools about 6.5 degrees Celsius per kilometer of altitude.

10 Lower Layers of Atmosphere
Stratosphere – directly above troposphere, extending from 10 km to about 50 km above Earth’s surface Portion of the upper layer contains high levels of a gas called ozone Many jet aircrafts fly in the stratosphere because it is very stable. Also, the ozone layer absorbs harmful rays from the Sun.

11 Upper Layers of Atmosphere
Mesosphere – extends from the top of the stratosphere to about 85 km above Earth Coldest layer with little ozone Meteors or rock fragments burn up in the mesosphere. Ionosphere here – layer of charged particles

12 Upper Layers of Atmosphere
Thermosphere – thickest atmospheric layer found between 85 km and 500 km above Earth’s surface The thermosphere is a layer with auroras, known for its high temperatures. Warms as it filters out X-rays and gamma rays from the Sun Ionosphere here, too – help carry radio waves.

13 Upper Layers of Atmosphere
Exosphere - The atmosphere merges into space in the extremely thin exosphere. This is the upper limit of our atmosphere. Outer layer where space shuttle orbits.

15 The Ozone Layer About 19 km to 48 km above Earth in the stratosphere (90%) and troposphere (10%). Layer of 3-atom molecules that protects the Earth from the Sun’s harmful ultraviolet radiation Life depends on the ozone! Pollutants called chlorofluorocarbons (CFCs) are destroying the ozone CFCs are used in refrigerators, air conditioners, aerosol sprays, and foam packaging ~ if products leak, CFCs enter atmosphere Ozone layers has a large hole over Antarctica and a smaller one over the North Pole

16 Solar energy Some of the Sun’s energy coming through Earth’s atmosphere is reflected or absorbed by gases and/or clouds in the atmosphere. Each layer may be affected by and/or may absorb some of the radiation or light from solar energy.

17 How do atmospheric properties vary with altitude?

19 Temperatures and composition change
with Height giving structure to an atmosphere The type of radiation from the sun as well as the amount of this radiation transmitted will vary depending on the layer of the atmosphere.

20 Solar energy Greenhouse Effect
Solar energy that is absorbed by the Earth’s land and water is changed to heat that moves/radiates back into the atmosphere (troposphere) where gases absorb the heat, a process known as the greenhouse effect. 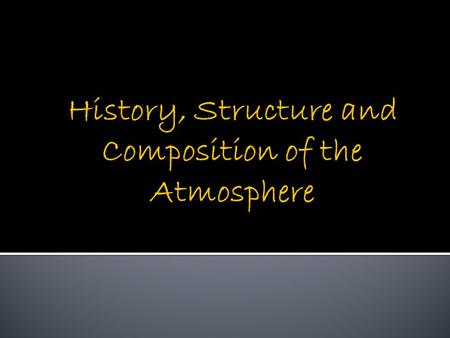 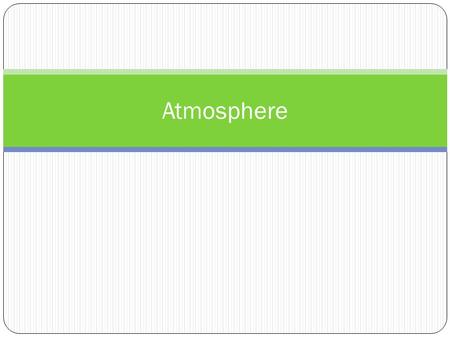 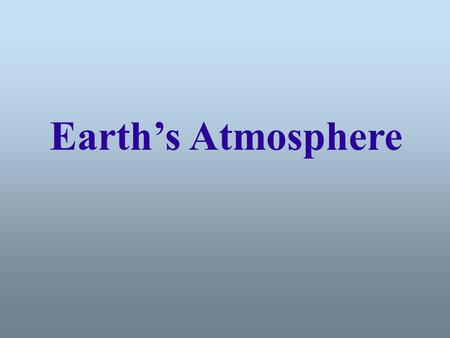 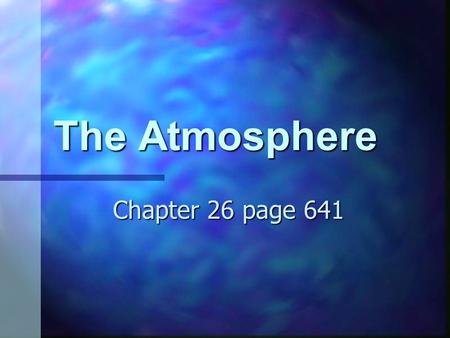