1 doc.: 18-12/108r0 Submission October 26, 2012 Slide 1 FCC TV Band Incentive Auction: Impact on Unlicensed Operation Notice: This document has been prepared to assist IEEE 802.18. It is offered as a basis for discussion and is not binding on the contributing individual(s) or organization(s). The material in this document is subject to change in form and content after further study. The contributor(s) reserve(s) the right to add, amend or withdraw material contained herein. Date: October 26, 2012 John Notor

3 doc.: 18-12/108r0 Submission Incentive Auction Overview Key elements of the Incentive Auction: 1.A “reverse auction” in which broadcast television licensees submit bids to voluntarily relinquish spectrum usage rights in exchange for payments. 2.A reorganization or “repacking” of the broadcast television bands in order to free up a portion of the ultra high frequency (UHF) band for other uses. 3.A “forward auction” of initial licenses for flexible use of the newly available spectrum. Relationship of auction elements: 1.Each of the three pieces presents distinct issues to resolve. 2.All three pieces are interdependent. 3.For the incentive auction to succeed, all three pieces have to work together. October 26, 2012 3John Notor

6 doc.: 18-12/108r0 Submission Uplink Band Variation by Market The FCC proposes to allow the Uplink Band to vary by market depending upon circumstances. The Uplink guard band frequency will also vary by market as a consequence of this approach. Variations in Uplink allocations by market creates unpaired downlink channels which will be allocated to supplemental expansion of downlink services, or possibly TDD operation. October 26, 2012 6 John Notor

8 doc.: 18-12/108r0 Submission Part 15 Wireless Microphones Part 15 wireless microphones are permitted on unused TV channels per rules in a previous waiver. 1.This continues pending the outcome of WT Docket 08-166, Wireless Microphone Order and Further Notice. The FCC has requested a refresh of comments related to WT Docket Nos. 08-166, 08-167, ET Docket No. 10-24 in DA 12-1570, released October 5, 2012. 2.The FCC, in the TVWS proceeding, excluded TVWS devices from two channels near Ch 37 which, if available, could be used for wireless microphones. 3.In addition to protected LPAS devices, the FCC permits certain qualified unlicensed microphone operators to register in the TVWS database for protection from TVWS devices at certain specific times and locations. The FCC seeks comment regarding operation of wireless microphones, including both LPAS and Part 15 devices, in the packed TV band spectrum that results from establishing the 600 MHz band plan. October 26, 2012 8 John Notor

9 doc.: 18-12/108r0 Submission Part 15 TV White Spaces The FCC proposes to continue to allow TV White Space Devices (TVWDs) to operate under current rules on unused TV spectrum available after the 600 MHz band plan is implemented. The FCC proposes allowing TVWDs to use the guard band spectrum. –The FCC is expecting guard bands to be 6 MHz wide. –Guard bands may include an additional 0-4 MHz of remainder spectrum which may result in individual mobile markets when the final 600 MHz band plan for each market is implemented. FCC seeks comment on these proposals, comments on the technical conditions for operation of TVWDs in the guard band spectrum, and other comments on other issues related to TVWDs. The FCC seeks comment on whether Ch 37 should be made available for unlicensed use. The FCC seeks comment on whether the FCC should maintain the designation of two channels near Ch 37 for wireless microphones. October 26, 2012 9 John Notor

10 doc.: 18-12/108r0 Submission Final Thoughts The FCC is proposing no specific changes to the Part 15 rules in this proceeding. The reallocation of TV spectrum to flexible terrestrial services reduces the number of channels available to TVWDs overall, especially in suburban and rural areas. Because the downlink guard band will be a fixed frequency band nation wide when the final band plan is rolled out, the rules for operation of unlicensed devices may be more flexible in the downlink guard band. Because the uplink guard band varies by geographic market area, operation in the uplink guard band will likely be subject to present TVWS rules which require access to a database to gain authorization to operate. The need for spectrum for wireless microphone operations may lead to additional restrictions on the use of guard band frequencies for TVWDs, and other unlicensed devices, especially in and near major metropolitan areas. October 26, 2012 10 John Notor 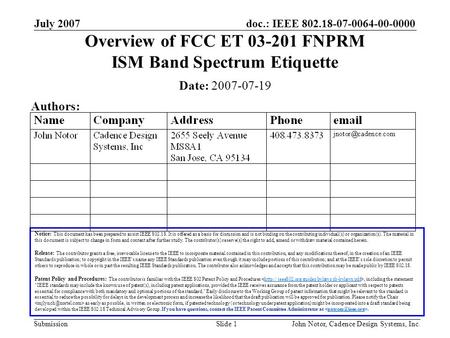 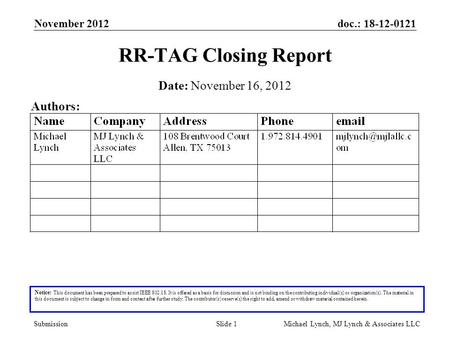 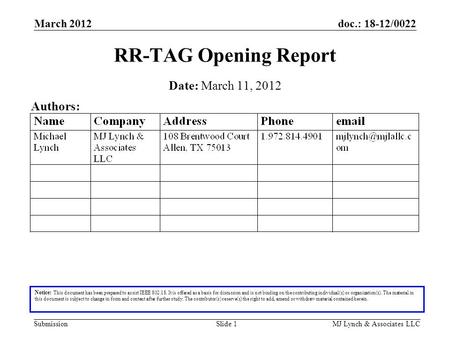 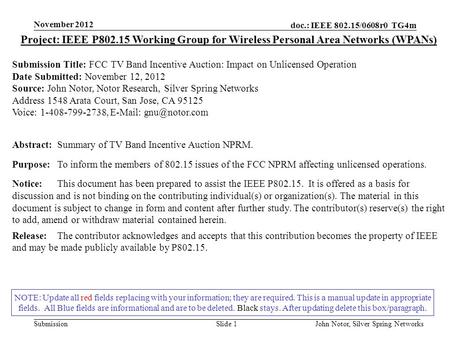 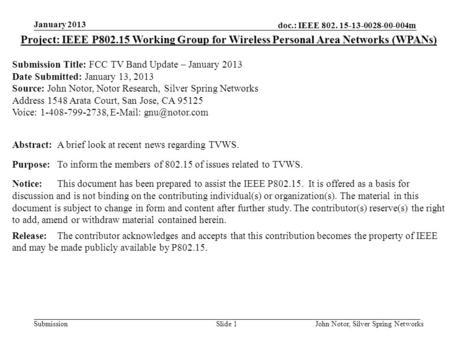 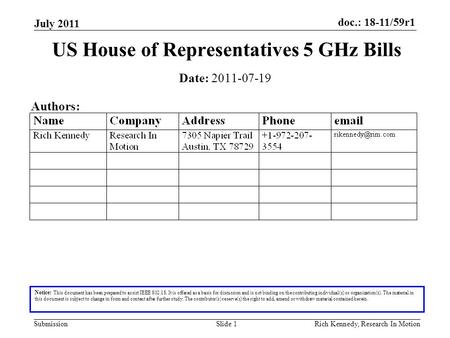 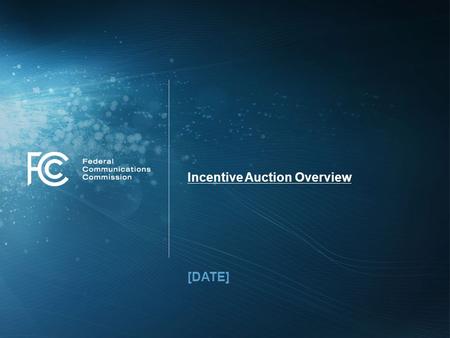 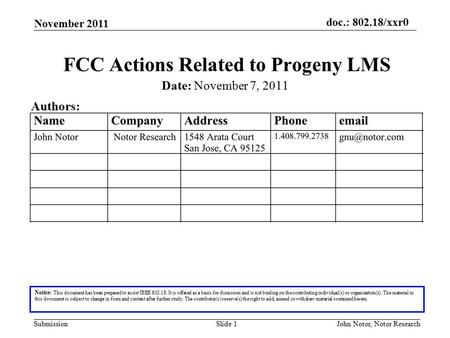 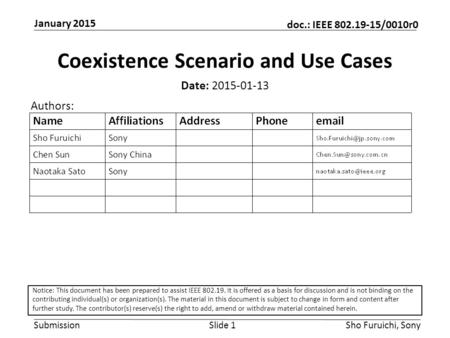 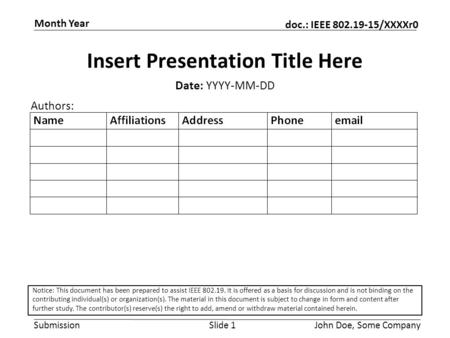 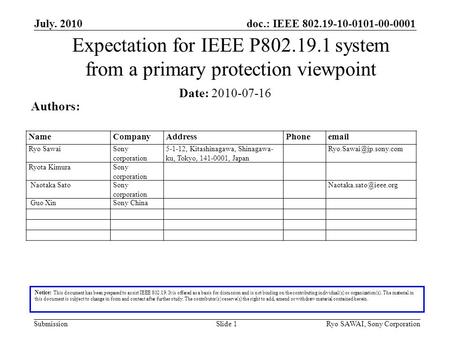 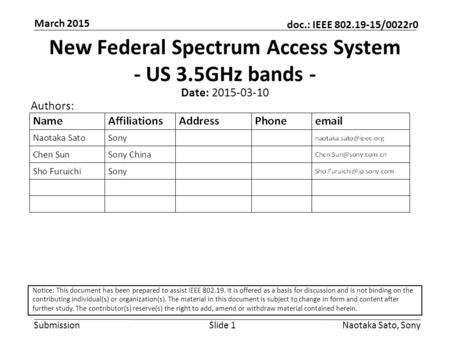 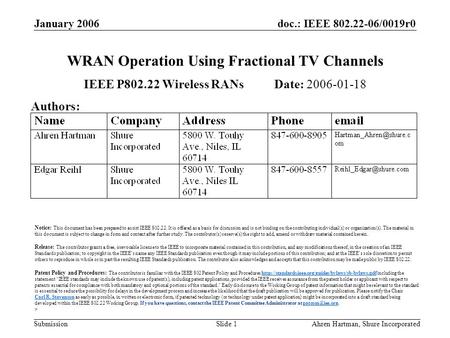 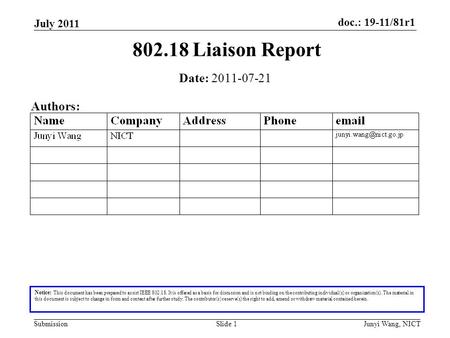 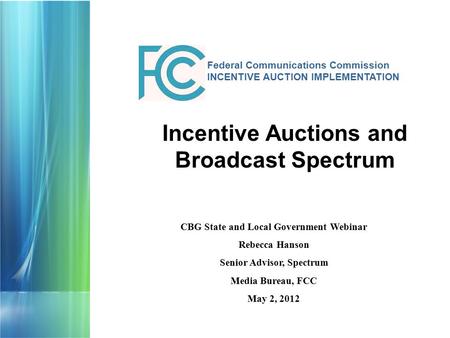 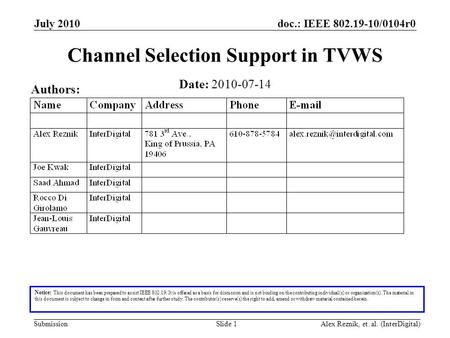 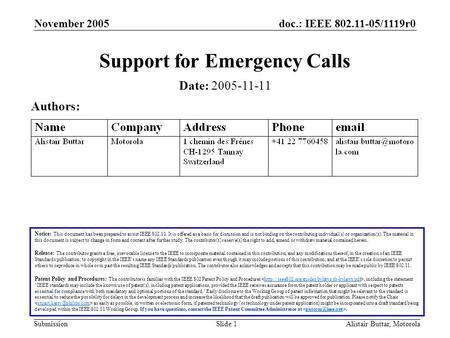 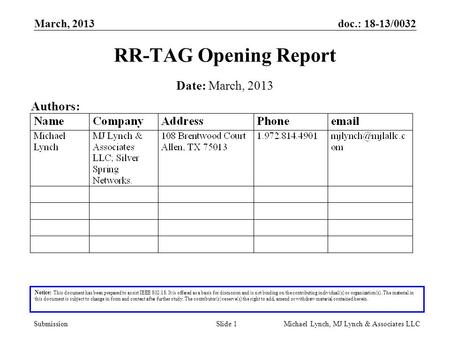 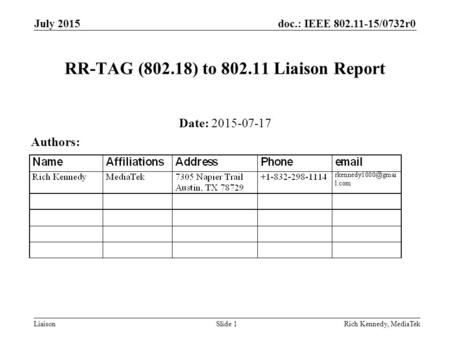 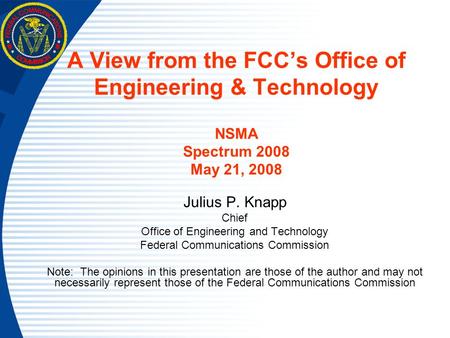