7 KautilyaKautilya  Chandragupta’s advisor.  Brahmin caste.  Wrote The Treatise on Material Gain or the Arthashastra.  A guide for the king and his ministers:  Supports royal power.  The great evil in society is anarchy.  Therefore, a single authority is needed to employ force when necessary!

8 Asoka (304 – 232 BCE)  Religious conversion after the gruesome battle of Kalinga in 262 BCE. (After his empire was complete)  Dedicated his life to Buddhism.  Built extensive roads.  Conflict  how to balance Kautilya’s methods of keeping power and Buddha’s demands to become a selfless person?

11 One of Asoka’s Stupas

17 Fa-Hsien: Life in Gupta India  Chinese Buddhist monk traveled along the Silk Road and visited India in the 5c (CE)  He was following the path of the Buddha.  He reported the people to be happy, relatively free of government oppression, and inclined towards courtesy and charity.  But He also indicated that the caste system was rapidly assuming its basic features, including "untouchability," the social isolation of a lowest class that is doomed to menial labor.

21 KalidasaKalidasa  The greatest of Indian poets.  His most famous play was Shakuntala.  During the reign of Chandra Gupta II. 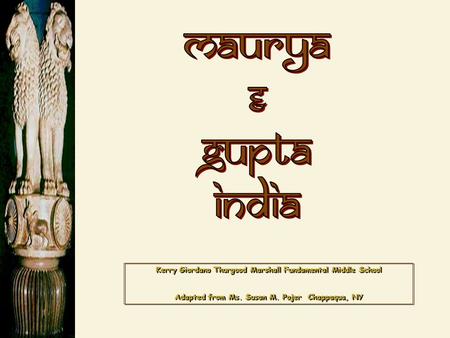