4 What is a biome?  Definition: the world's major communities, classified according to the predominant vegetation and characterized by adaptations of organisms to that particular environment.

5 So what? What does this mean and why do we care about biomes?

6 Characteristics of Every Biome  Breakdown:  Major world community  Certain climate- temperature and precipitation in an area or region  Organisms have adapted to the climate  Many ecosystems  Have changed over the history of the Earth  Every square inch of the planet is located in a biome

9 Freshwater  3% of the world’s water  99% of freshwater is located in glaciers, pack ice, & aquifers (underground water)  The other 1%  Lakes and ponds  Rivers and streams

18 Coniferous and Boreal Forest (Taiga)  Northern part of North America and Eurasia  Contains conifer- trees that have leaves shaped like needles instead of flat leaves. These trees do not lose their leaves in the fall and winter.  ~40˚C to 20˚  30-90 cm (12-33 inches) of rain a year  Warm and rainy summers  Cold cold winters! Temperatures can reach a low of 65° F BELOW zero! Brrrr….

20 Animals in the Coniferous and Boreal Forests

21 Plants in the Coniferous and Boreal Forest

22 Arctic Tundra  North Pole, Arctic Circle, and Greenland  Covered in snow for most of the year  Permafrost- The layer of earth located below the tundra is frozen all year long  Less than 10 inches of precipitation a year  ~40˚C to 18˚  Strong winds!! Create “white outs”, which occurs when the winds blow snow so much that it is hard to see.

24 Animals in the Tundra

25 Plants in the Tundra

28 Animals in the Tropical Rainforest

29 Plants in the Tropical Rainforest

30 Temperate Grassland  South America, South Africa, Eurasia, and mid-west United States  ~20˚C to 30˚  50-90 cm of rainfall a year  Tall grasses but no trees  There are a lot of fires in this biome!

33 Animals of the Temperate Grassland

34 Plants of the Temperate Grasslands

38 Animals of the Savanna

39 Plants of the Savanna

43 Animals of the Desert

44 Plants of the Desert 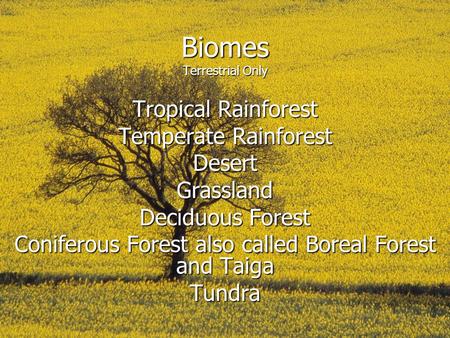 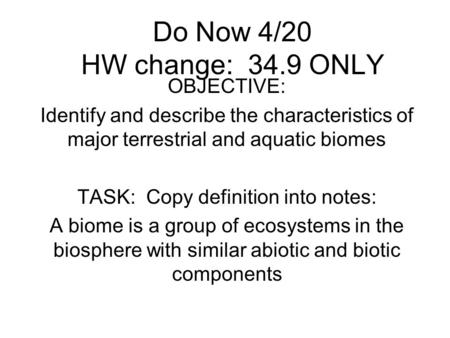