5 What Makes an Interest Group Successful?

6 ► The Surprising Ineffectiveness of Large Groups  Potential group: All the people who might be interest group members because they share a common interest.  Actual group: The part of the potential group consisting of members who actually join.  Collective good: Something of value that cannot be withheld from a group member

7 What Makes an Interest Group Successful?  Free-Rider problem: Some people don’t join interest groups because they benefit from the group’s activities without officially joining.  The bigger the group, the larger the free-rider problem. (Olson’s law of large groups)  Large groups are difficult to keep organized.

8 What Makes an Interest Group Successful?  Small groups are better organized and more focused on the group’s goals.  Consumer groups have a difficult time getting significant policy gains - the benefits are spread over the entire population.  Groups that can provide selective benefits can overcome this problem.

9 What Makes an Interest Group Successful? ► The Benefits of Membership in the AARP (Figure 11.2)

10 What Makes an Interest Group Successful? ► Intensity  Single-Issue groups: Groups that focus on a narrow interest and dislike compromise.  Groups may focus on an emotional issue, providing them with a psychological advantage.  May be more likely to use protests and other means of political participation than traditional interest groups that use lobbyists.

11 What Makes an Interest Group Successful? ► Financial Resources  Not all groups have equal amounts of money.  Monetary donations usually translate into access to the politicians - a phone call, a meeting, etc.  There is a bias towards the wealthier groups.  The wealthier groups don’t always win in the policy arena.

14 How Groups Try to Shape Policy ► Lobbying  “communication by someone other than a citizen acting on his own behalf, directed to a governmental decisionmaker with the hope of influencing his decision.” (Lester Milbrath)  Two basic types: Those that are employed by a group, and those that are hired temporarily.

17 How Groups Try to Shape Policy ► Litigation  If an interest group fails in one arena, the courts may be able to provide a remedy.  Interest groups can file amicus curiae briefs in court cases to support their position.  Class Action lawsuits permit small groups of people to try and correct a situation on behalf of a much larger group.

18 How Groups Try to Shape Policy ► Going Public  Groups try and cultivate a good public image.  Groups use marketing strategies to influence public opinion of the group and its issues.  Groups will purchase advertising to motivate the public about an issue. 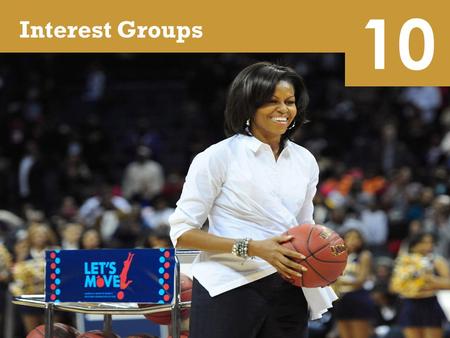