Presentation on theme: "Chapter 16 Section 3 Education Reform Women had few rights or opportunities in the 1800’s. One of the first areas that women sought to reform was education."— Presentation transcript:

3 Education Reform Women had few rights or opportunities in the 1800’s. One of the first areas that women sought to reform was education. High schools and colleges for women were opened. Of the many who crusaded for better schooling for young women, two of the most famous were Emma Hart Willard and Mary Lyon.

5 Education Reform In 1833, Oberlin College became the first men’s college to admit women. The Ohio college made two reforms at one time by opening its doors to both women and African-Americans in 1833. Women also began breaking into professions dominated by men, such as medicine and the ministry. Elizabeth Blackwell was the first women in the United States to earn a Medical Diploma.

8 Fighting For Equal Rights The Seneca Falls Convention, organized by Elizabeth Cady Stanton and Lucretia Mott, drew up the “Declaration of Sentiments”, calling for equal rights for women. This included the right for women to vote. Soon after the convention, Susan B. Anthony joined the cause. Anthony and Stanton formed a close team. Stanton would write fiery speeches that Anthony would travel to deliver in town after town.

13 Fighting For Equal Rights Increasingly, women spoke up against slavery and for equal rights. Neither Stanton or Anthony would live to see the day all women in the United States would have the right to vote. Yet what they started would be fulfilled some 70 years later when the 19 th Amendment of the Constitution was ratified.(19 th Amendment 1920)

Download ppt "Chapter 16 Section 3 Education Reform Women had few rights or opportunities in the 1800’s. One of the first areas that women sought to reform was education." 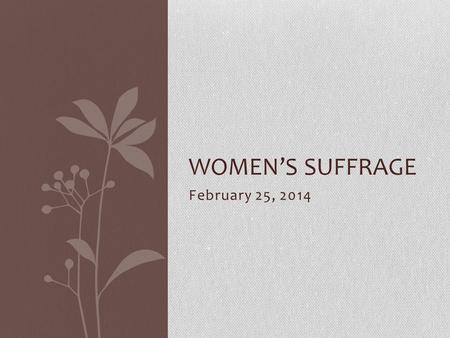 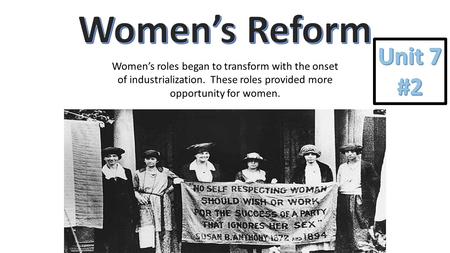