Presentation on theme: "Introduction to Persuasive Writing. Propaganda Authors sometimes use techniques to persuade you to act a certain way based on emotions."— Presentation transcript:

2 Propaganda Authors sometimes use techniques to persuade you to act a certain way based on emotions.

3 Bandwagon Effect A technique that suggests that most people support or oppose an issue.

4 Peer Pressure When an author tries to convince you that “everybody” is thinking or doing what the author says, and if the reader does not agree he will lose respect.

5 Repetition When an author tries to make an idea memorable even if it is not supported by clear reasoning.

6 Transfer When an author stirs the reader’s feelings about one thing and transfers those feelings to something else.

7 Loaded Words Writers use these words with highly emotional or controversial topics to “press our buttons”.

8 Name-calling When a writer makes accusations that are not supported by facts.

9 Stereotyping When a writer uses an unfair image of a group to make a point that isn’t true.

10 Snobbery A technique used by a writer to make people think they are better than others by acting a certain way.

11 “Ordinary Folks” A technique used by writers to connect itself with simple values and down-to-earth people.

12 Glittering Generalities When a writer uses patriotic, attractive, or catchy words that don’t really say anything.

13 Scientific Claim When the writer attempts to convince the reader that a product or idea is accurate or approved.

14 Testimonial A technique used by a writer that tells you to base your decision on what someone else thinks.

15 Scare Tactics A technique that communicates possible negative effects with strong and unsupported images that make people act out of fear.

16 Guilt by Association A technique that implies that if your friend did something bad, then you are probably guilty, too.

17 Appeal to Patriotism A technique that implies that a person may or may not be a truly dedicated citizen.

Download ppt "Introduction to Persuasive Writing. Propaganda Authors sometimes use techniques to persuade you to act a certain way based on emotions." 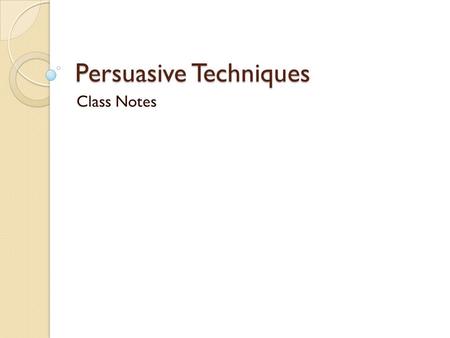 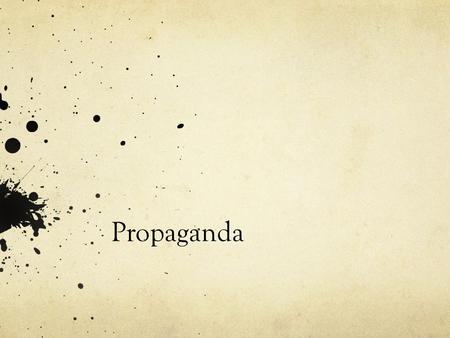 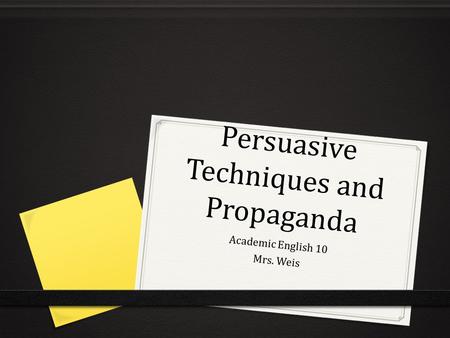 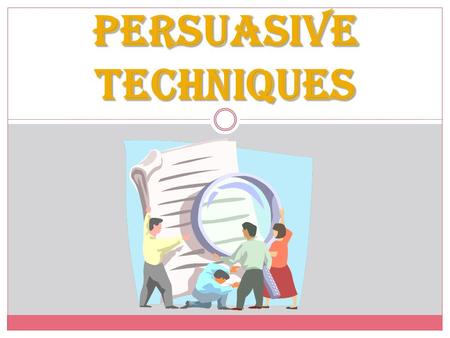