Presentation on theme: "INTRODUCTION TO THE SHORT STORY FICTION DEFINITION: WHAT IS A SHORT STORY? A short story is a work of fiction that focuses on one important event in."— Presentation transcript:

2 INTRODUCTION TO THE SHORT STORY FICTION

3 DEFINITION: WHAT IS A SHORT STORY? A short story is a work of fiction that focuses on one important event in the lives of a small number of central characters and that can usually be read in one sitting.

5 PLOT = THE FRAMEWORK OF A STORY Plot is the arrangement of related events that makes the story hang together. Plot can also be referred to as the structure of a short story. Structure concerns how the story is told.

6 PARTS OF THE PLOT Plot Line

7 EXPOSITION Introduction to characters and situation

8 CONFLICT The struggle of opposing forces

14 RISING ACTION The increasing steps of the conflict

15 CLIMAX The highest point of interest or suspense

18 CHARACTERS “ In the best stories, characters come alive. We care about their dreams, fears, and frustrations, just as if they were real people in our lives. ”

19 CHARACTERS Protagonist - ? Protagonist – main character / clearly central to the story with all major events having some importance to him or her.

20 CHARACTERS Antagonist - ? Antagonist – any character who opposes or struggles against the protagonist. Question: Does the antagonist always have to be a character (a person) in the story?

21 SHORT STORY TERMINOLOGY CHARACTER – A PERSON OR THING IN A STORY Dynamic – one that undergoes some type of change because of the action of the plot Static- One that doesn’t change throughout the work, reader’s knowledge of character does not grow Flat – embodies one or two qualities, ideas, or traits that can be readily accessible to readers (could be stereotypes “ dumb blonde ” or “ evil stepmother ” ) Round- Display inconsistencies and internal conflicts found in most real people Main – central character to the story – see protagonist Minor – less important character in a literary work, but still is needed for explanation or development of plot

22 SHORT STORY TERMINOLOGY ALLEGORY – A STORY IN WHICH PEOPLE, THINGS AND ACTIONS REPRESENT AN IDEA OR A GENERALIZATION ABOUT LIFE; OFTEN CONTAINS STRONG MORAL LESSONS APOSTROPHE – THE ADDRESSING OF SOMEONE OR SOMETHING, USUALLY NOT PRESENT, AS THOUGH PRESENT (O CAPTAIN! MY CAPTAIN!... DEATH, BE NOT PROUD)

23 SHORT STORY TERMINOLOGY DIALOGUE – THE CONVERSATIONS CARRIED ON BY THE CHARACTERS IN A LITERARY WORK EPIPHANY – IN FICTION, WHEN A CHARACTER SUDDENLY EXPERIENCES A DEEP REALIZATION ABOUT HIMSELF OR HERSELF; A TRUTH WHICH IS GRASPED IN AN ORDINARY RATHER THAN MELODRAMATIC MOMENT FLASHBACK – GOING BACK TO AN EARLIER TIME IN A STORY FOR THE PURPOSE OF MAKING SOMETHING PRESENT CLEARER

24 SHORT STORY TERMINOLOGY FOIL – CHARACTER IN A WORK WHOSE BEHAVIOR AND VALUES CONTRAST WITH THOSE OF ANOTHER CHARACTER IN ORDER TO HIGHLIGHT THE DISTINCTIVE TEMPERAMENT OF THAT CHARACTER ( USUALLY THE PROTAGONIST) FORESHADOWING – TO BE A SIGN OF SOMETHING TO COME; INDICATE OR SUGGEST BEFORE HAND

25 SHORT STORY TERMINOLOGY MOTIF – AN OFTEN-REPEATED IDEA OR THEME IN LITERATURE MOOD – THE FEELING A PIECE OF LITERATURE AROUSES IN THE READER; HAPPINESS, SADNESS, PEACEFULNESS

26 SHORT STORY TERMINOLOGY STREAM OF CONSCIOUSNESS – A STYLE OF WRITING IN WHICH THE THOUGHTS AND FEELINGS OF THE WRITER ARE RECORDED AS THEY OCCUR SYMBOL – A PERSON, PLACE, OR THING OR EVEN USED TO REPRESENT SOMETHING ELSE SYNTAX – THE ORDERING OF WORDS INTO MEANINGFUL VERBAL PATTERNS SUCH AS PHRASE, CLAUSE, AND SENTENCES; POETS OFTEN MANIPULATE SYNTAX, CHANGING CONVENTIONAL WORD ORDER, TO PLACE CERTAIN EMPHASIS ON PARTICULAR WORDS

Download ppt "INTRODUCTION TO THE SHORT STORY FICTION DEFINITION: WHAT IS A SHORT STORY? A short story is a work of fiction that focuses on one important event in." 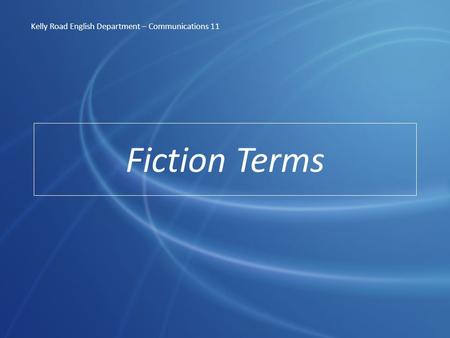 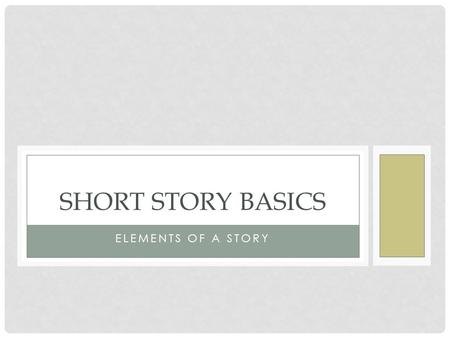 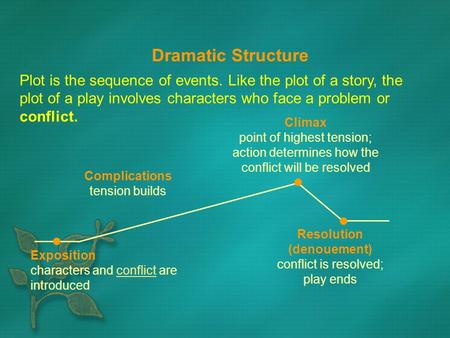 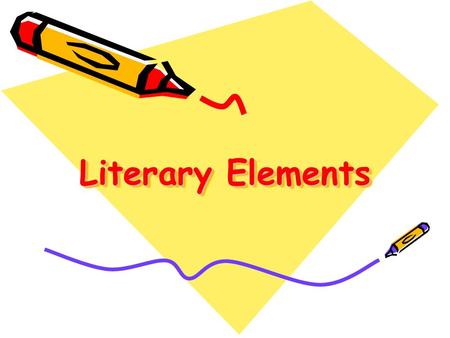 Literary Elements. What makes a great story? Plot, Setting, Characters, Conflict, Symbol, and Point of View are the main elements which fiction writers. 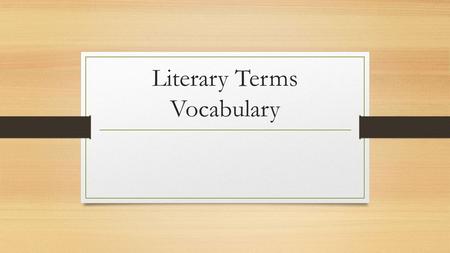 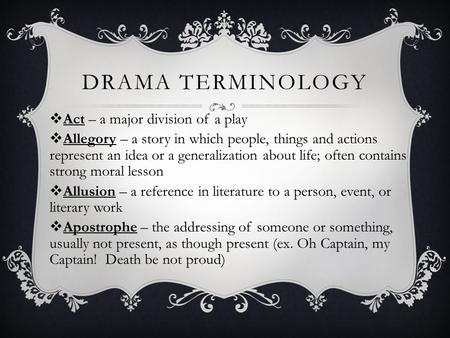 DRAMA TERMINOLOGY  Act – a major division of a play  Allegory – a story in which people, things and actions represent an idea or a generalization about. 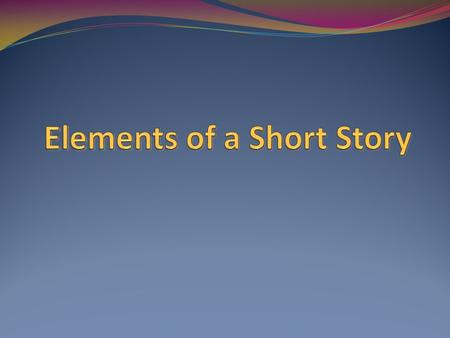