1 CHAPTER 5: ELECTRONS IN ATOMS
Rutherford’s model of the atom did not explain how the electrons occupy the space surrounding the nucleus. Recall: Opposites attract….right?? In the early 1900’s, investigations using the relationships that exist between light and electrons will reveal a more accurate model of the atom. Model of The Atom

2 Emission Spectrum atoms can exist in low energy states called ground states or at high energy states called excited states. when excited atoms return to ground states, it gives off energy in the form of electromagnetic radiation. all elements have a characteristic emission spectra that corresponds to the amount of energy given off. Ground & Excited States Emission Spectra

3 Probability of Finding an Electron
in a Hydrogen Atom.

4 The Bohr Model ---it’s really not boring
Niels Bohr linked photon emission with an atom’s electrons. electrons exist in fixed orbits and never in between. his model only explains the emission of Hydrogen atoms. Niels Bohr Flame Test Emission Flame Test Explanation The Quantum Model of the Atom Louis deBroglie suggested that electrons be considered waves confined to the space around the nucleus.

7 3. Hund’s Rule: orbitals of equal energy are each occupied by one electron before any orbital is occupied by a second electron. all electrons in singly occupied orbitals must have the same spin. Orbital Notation a way to illustrate what orbitals the electrons occupy in an atom. ie: Nitrogen – 7 electrons

8 Electron Configurations
electrons configurations (shorthand method) are a method of noting how many electrons are in an atom and where they are located. Order of Filling Maximum amount of electrons: s-orbital  2 electrons p-orbital  6 electrons d-orbital  10 electrons f-orbital  14 electrons Quantum Subshells

14 The Photoelectric Effect
a phenomena involved with the emission of electrons from a metal when light shines on a metal. light of only a certain frequency enabled this event to occur  light behaves like streams of particles! Photoelectric Effect Max Planck suggested that energy could only exist in discrete lumps called quantum. E = h n h = x Js Planck and Blackbody Radiation Einstein also proposed that light delivers its energy in chunks called photons. Therefore, in order for an electron to be ejected (photoelectric effect) , the electron must be struck by a single photon, of certain energy, to knock the electron loose. 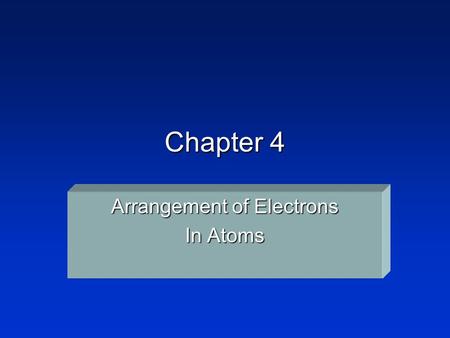