1 IN WHAT WAYS DOES YOUR MEDIA PRODUCT USE, DEVELOP OR CHALLENGE FORMS AND CONVENTIONS OF REAL MEDIA PRODUCTS. ZARA

3 LUCY (COMPARING MY FILM TO AN OPENING SEQUENCE) This film is a Thriller Sci-Fi about a woman who accidently gets caught up within the work of her boyfriend and ends up being given a deal of trying a new piece of technology which could benefit all of mankind. Unfortunately for the organisation, she agrees with the deal, but also double crosses and becomes a warrior of no mercy with the knowledge that is beyond human logic. Overall, the film contains organisations and businesses, which is what my own opening sequence to an extent with it being about an organisation that is trying to protect a briefcase from other antagonist organisations. Also, it relates to my opening sequence because the other side of the film genre is Sci-Fi. Ours contains psychological events throughout the film therefore it can relate to the film Lucy. Although, the film also does not follow the typical codes and conventions that you would expect in a thriller films due to the genre of it being a Sci-Fi thriller which is a genre hybrid. Because of it being a mixed genre, it doesn’t fully match up with the genre of my opening sequence since it is a Thriller film with no other genres mixed with it. Just only a few psychological events.

4 The setting of Lucy is different to ours. Lucy is mainly based outside in a city where as the opening is mainly based inside within the premises. The Narrative is also completely different since the opening sequence is about an organisation protecting a briefcase from other organisations and the Lucy film is mainly focused on that once woman who has the ability to think further than human logic. Although the sound of the thriller film is quite similar but the Lucy film uses silence to create suspense whereas our opening sequence uses music that slowly builds up to create tension. Over all, it does just about match up with the codes and convention of our thriller film.

5 Cabin in the woods does match up is the use of music to create tension and suspense through the moments in both the thriller film and opening sequence to indicate that something bad is going to happen. Yet the Thriller film also uses more silence like the Lucy film to also create tension. Overall, the film may not have all of the elements to match up with our opening sequence but it does have a few codes and conventions that can relate to it to an extent.

6 CONVENTIONS CHALLENGED AND REINFORCED According to the codes and conventions of the thriller genre, my opening sequence challenged a lot of these. A code of the thriller genre is that the setting is usually a dark and gloomy setting at night or either based during a storm or a shower of rain. Yet our thriller film is based in daylight which challenges this as well as the setting is not raining either. The opening sequence also does not include quick paced editing since there as not been a scene involving so therefore also challenging the codes and conventions. But there are some that the opening sequence did follow to make is thriller film. Nearing the end of the sequence there was a slow yet suspense building moment leading up to the murder of the protagonist. This creates tension, which is one of the conventions of a thriller film. Another is the use of non- diegetic sound to also help build suspense for the audience; it also leaves questions for the audience at the end of the opening sequence because they do not know what had happened afterwards to the protagonist. It relates to the mystery that is left which I also another convention within the thriller genre.

Download ppt "IN WHAT WAYS DOES YOUR MEDIA PRODUCT USE, DEVELOP OR CHALLENGE FORMS AND CONVENTIONS OF REAL MEDIA PRODUCTS. ZARA." 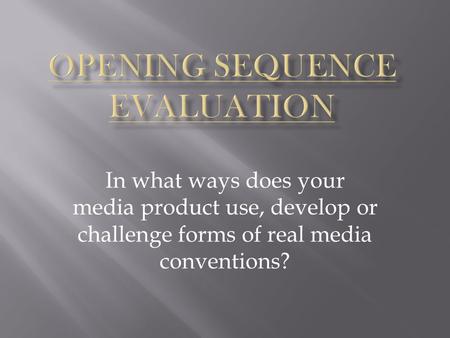 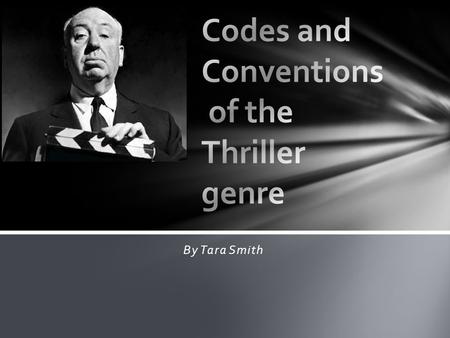 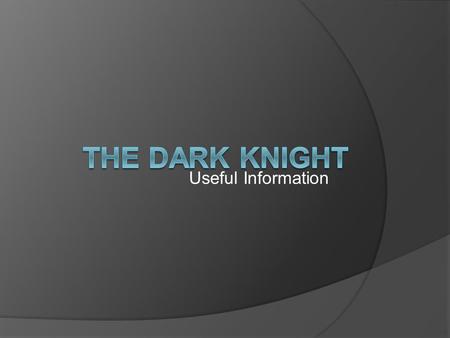 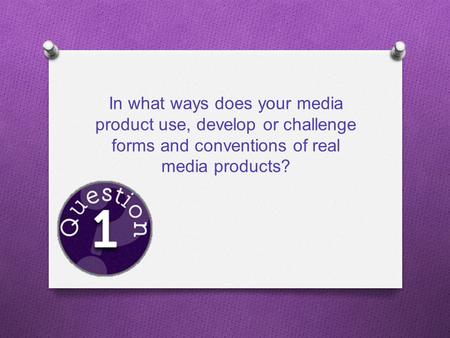 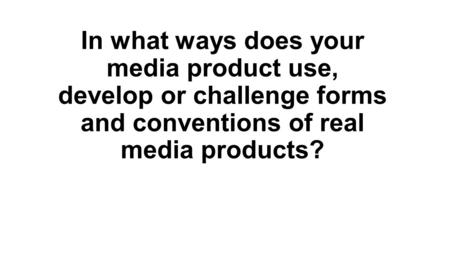 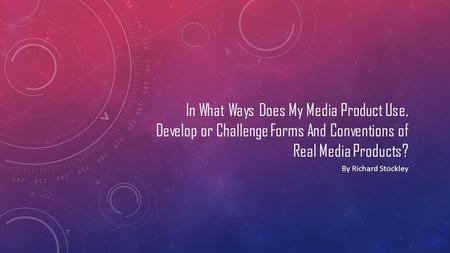 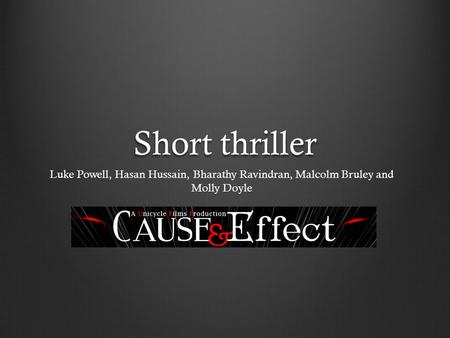 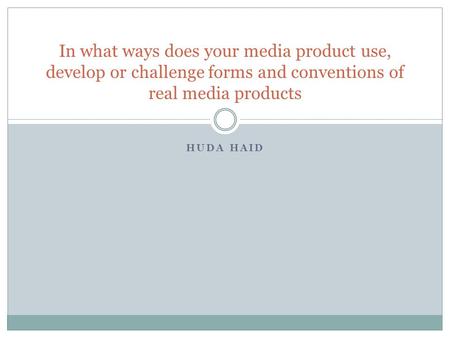 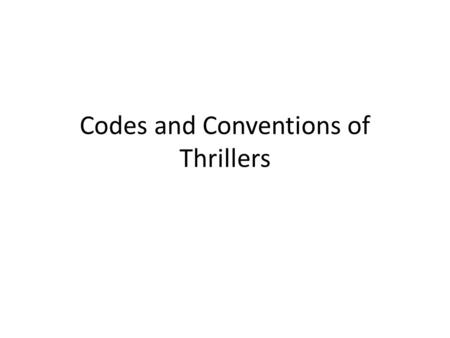 Codes and Conventions of Thrillers. Characters Most of the characters in these thriller movies tend to be more human than characters you would see in. 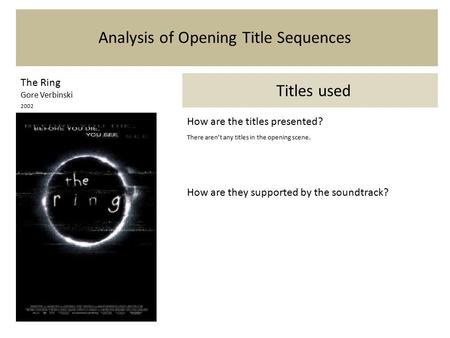 Analysis of Opening Title Sequences The Ring Gore Verbinski 2002 Titles used How are the titles presented? There aren’t any titles in the opening scene. 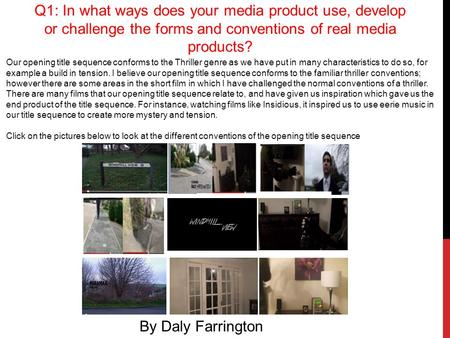 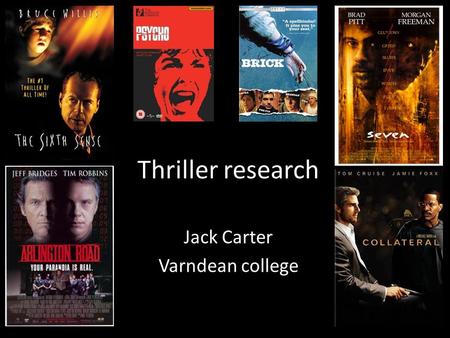