2 6.1 One-Dimensional Arrays
A one-dimensional array is a list of related data of the same data type, referenced by the same name. Declaring one dimentional Arrays Declare ArrayName[number-of-elements] as data type Example: Declare ShoppingItems[4] as String

3 Declaring Arrays When an array is declared, the computer sets aside memory to store the values of the elements of the array. Declaring an array means telling the computer what is the data type of the array and how many elements will be stored in it. Pseudocode to declare arrays: Declare items[5] Of String declares an array with 5 elements, all of which are strings Note: the first element of an array has subscript 0 Address: Items[0] Items[1] items[2] items[3] items[4] Content: “Milk” “Bread” “Eggs” “Butter” “Apples”

7 Parallel Arrays Parallel arrays are arrays of the same size in which elements of the same subscript are related. It is necessary that the data in each array be loaded in the correct order. If we have arrays salesPerson and sales (as below), each element of salesPerson is related to an element in sales by the position in the array. salePerson: “Joey” “Ellie” “Sarah” “Kim” Sales: $ $ $ $

9 Question In the last example why the names and sales arrays have been declared to have 100 elements? In some programming languages you may have to specify the size of the array even if you do not know the exact number of its elements. In this case, it is better to declare an array for a larger number of elements than you plan to use.

10 Why Use Arrays? Arrays reduce the number of variable names in the program. Sales[K] versus Sales1, Sales2, SalesN, …. Arrays increase the flexibility of the program. Arrays reduce the number of If-Then statements needed in selection processing. If Sales[K] Then rather than If Sales1 Then … If Sales2 Then … If Sales3 Then … Arrays improve efficiency by allowing data to be read into the program once but processed as many times as necessary

11 Practice questions from textbook (Self check problems for section 6.1)
What does the following program do? Declare letter[5] As Character Declare j As Integer for (j=0; j<=4; j++) input letter[j] end for for (j=0; j<=4; j+2) write letter[j] Write a program segment that inputs 10 characters and displays them in a reverse order?

13 The Serial Search Steps: Load, or populate, the arrays.
Search the array that contains the key to find a match. Display the key and corresponding values in the non-key arrays with the same subscript as the one with the key value, if a match is found. Display an ‘unsuccessful search’ message if no matches are found.

14 The Serial Search (continued)
Use a flag, or switch, to decide which message to print. A flag is a variable that is set to zero or one, depending on the results of an operation. The value of the flag can be checked later in the program with an If statement to determine which action to take.

15 The Serial Search (continued)
Pseudocode for the serial search of an array named KeyData containing N elements: Set Index = 0 //Set a flag (Found) equal to 0 Set Found = 0 While (Found == 0) AND (Index < N) If KeyData[Index] == Key Then Set Found = 1 End If Set Index = Index + 1 End While If Found == 1 Then //Display the array element with subscript of Index–1 Write KeyData[Index-1] Else Write “The item you are searching for was not found.”

16 A serial search Example
This program segment displays the test score of a particular student when the student’s id is input by the user. “Enter the id of the student whose score you want to find” Input IDKey Set Index = 0 Set Found = 0 While (Found == 0) AND (Index < N) If DINumbers[index] == IDKey Then Set Found = 1 End If Set Index = Index + 1 End While If Found == 0 Then Write “student ID not found” Else Write “id number: ” + IDKey Write “student name: ” + names[index -1] write “test score: “ + scores[index -1]

17 Binary Search The binary search method is a good way to search a large amount of data for a particular item, which is called the search key more efficient than the serial search technique requires that the table keys, the array of data to be searched, is in numerical or alphabetical order

19 Binary Search Example Suppose we are looking for “cat” in the following array: Check outYoutube example

20 The Bubble Sort Technique
To sort data means to arrange it in a particular numerical or alphabetical order, ascending or descending. To sort small amounts of data, use the bubble sort technique. Make several passes through the data. Compare adjacent pairs of data. If the pairs are not in order, swap them. Continue until all data is processed.

23 Figure 6.5 Flowchart for the bubble sort

24 6.3 More About Searching and Sorting
The selection sort procedure is a more efficient way to sort data stored in an array than the bubble sort technique

28 6.4 Strings as Arrays of Characters
Some programming languages do not contain a string data type. Strings are implemented as arrays whose elements are characters. In programming languages that contain this data type, strings can be formed as arrays of characters. To define a string as an array of characters, indicate the data type in the Declare statement. The following statement: Declare FirstName[15], LastName[20] As Character defines the variables FirstName and LastName to be strings of at most, 15 and 20 characters, respectively.

33 Nested Loops Help Load Arrays
To input data into a two-dimensional array, use a nested loop. 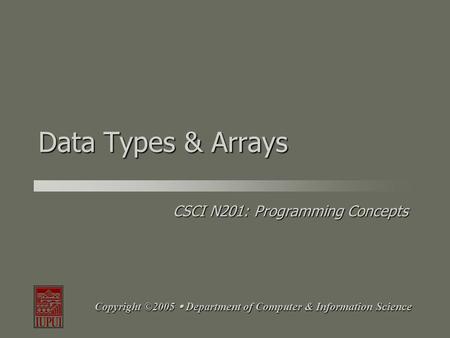 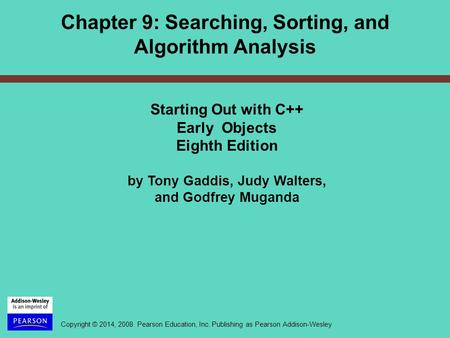 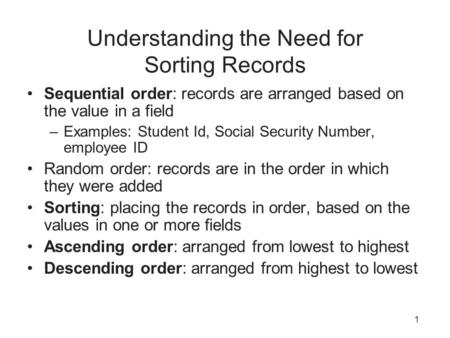 Understanding the Need for Sorting Records 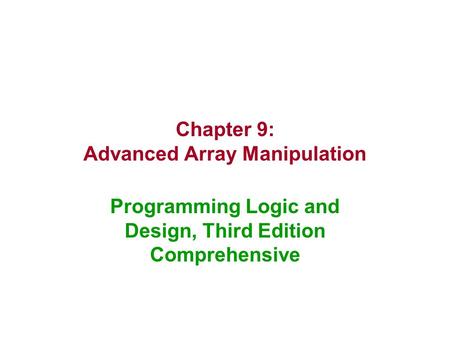 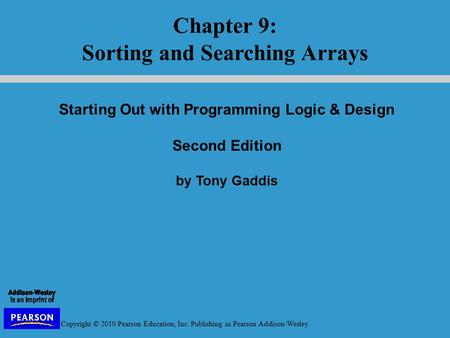 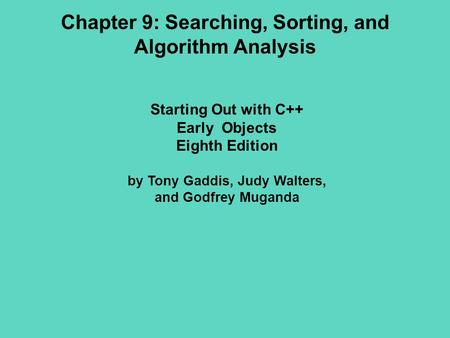 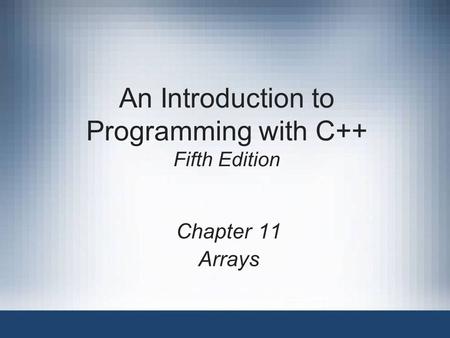 An Introduction to Programming with C++ Fifth Edition 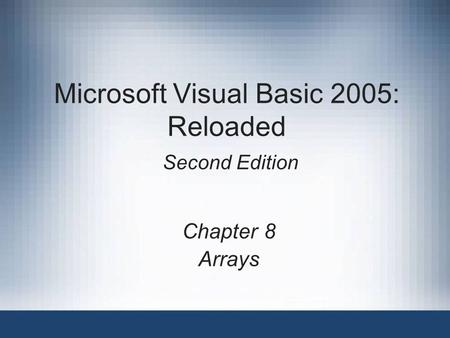 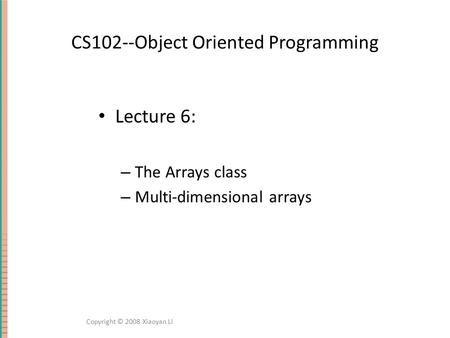 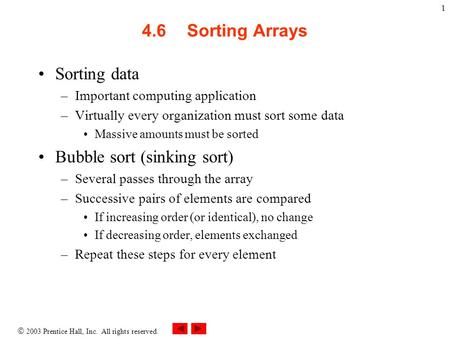 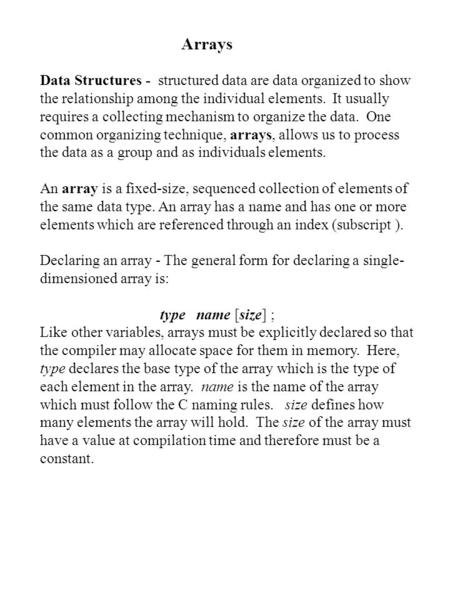 Arrays Data Structures - structured data are data organized to show the relationship among the individual elements. It usually requires a collecting mechanism. 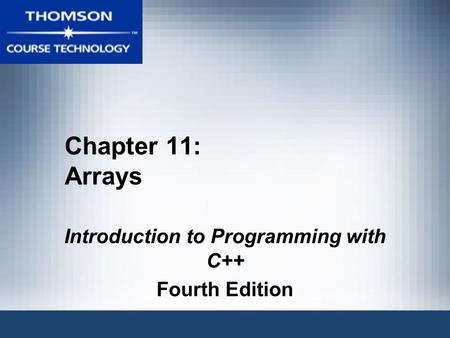 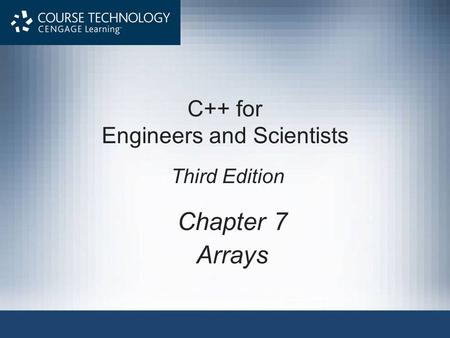 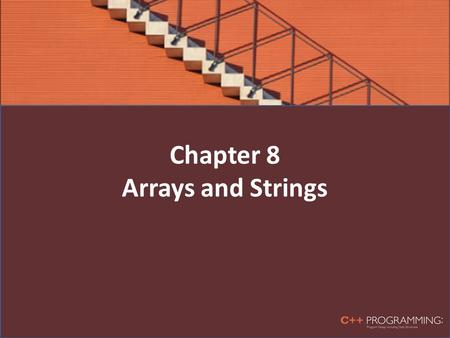 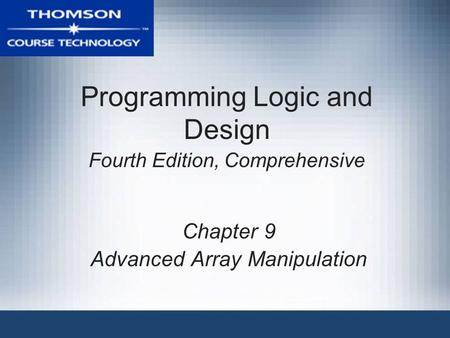 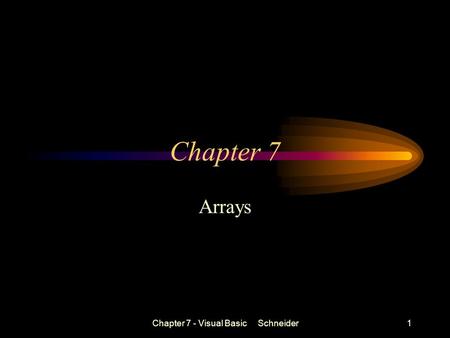 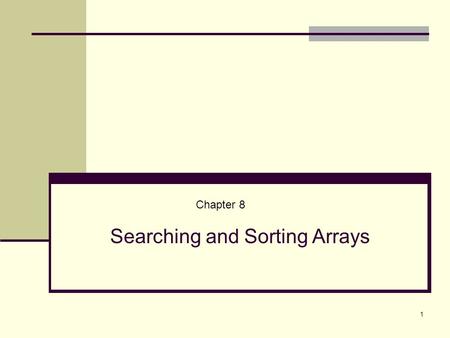 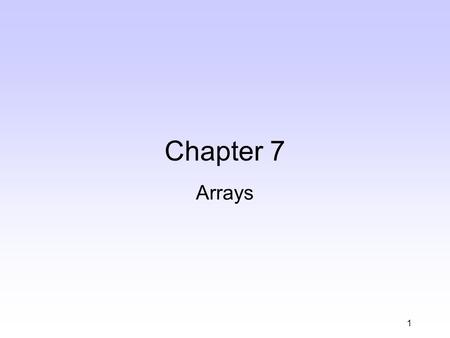 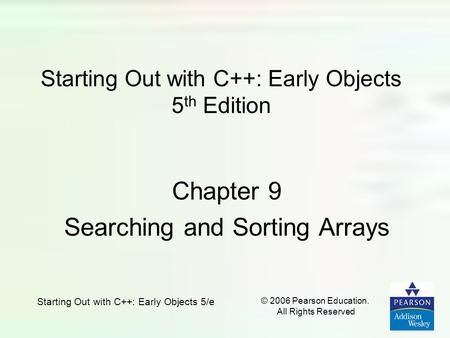 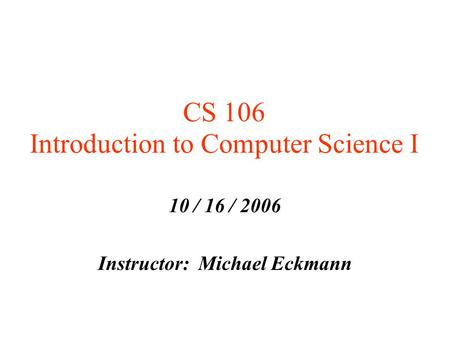