3 Kidney Location and External Anatomy
Adrenal Gland Retroperitoneal position behind the peritoneum Superior lumbar region From the twelfth thoracic to the third lumbar vertebrae The right kidney is lower than the left Hilum: Medial border where ureters, blood vessels, lymphatics, and nerves enter and exit

6 Nephron Nephrons are the structural and functional units that form urine, consisting of: Renal Corpuscle: The collective term for the glomerulus and the surrounding capsule Glomerulus: Tuft of capillaries Bowman’s capsule: Enlarged end of the renal tubule that surrounds the glomerulus Renal Tubule: Tube into which fluid passes Proximal convoluted tubule Loop of Henle Distal convoluted tubule

10 Juxtamedullary Nephrons
Juxtamedullary nephrons: % of nephrons Renal corpuscle lies deep in cortex near medulla Have long loops of Henle Responsible for creating medullary concentration gradient that allows the kidney to change dilution of urine Vasa Recta capillaries around the loops of Henle

13 Glomerulus The primary filtering device of the nephron
Blood is transported into the Bowman's capsule from the afferent arteriole Within the capsule, the blood is filtered through the glomerulus and then passes out via the efferent arteriole. Filtered water and aqueous wastes are passed out of the Bowman's capsule into the proximal convoluted tubule.

14 Glomerulus + Bowman’s Capsule = Renal Corpuscle
The first part of the nephron The afferent arteriole leads to the glomerulus, which is a specialized capillary bed. Filtration: The hydrostatic force of the blood pressure pushes the fluid from the blood out into Bowman’s capsule. Filtrate: The fluid pushed out consists of everything except blood cells and large proteins.

19 Nephrons Notice how the distal convoluted tubule folds around and is next to the afferent arteriole.

20 Macula Densa There is a portion of the DCT that abuts the afferent arteriole. At that region of the DCT, there are tall, closely-packed DCT cells that collectively are known as the macula densa. Macula densa cells are osmoreceptors that are responsible for measuring filtrate Na+ If Na+ is low in the filtrate, the macula densa send a chemical signal to the juxtaglomerular cells to release renin.

21 Juxtaglomerular Cells
In the afferent arteriole where the DCT is touching, there are specialized smooth muscle cells known as juxtaglomerular cells. Act as baroreceptors These JG cells contain large amounts of secretory granules containing renin When blood pressure low, the JC cells release their renin

23 Nephron Vasculature Consists of 2 capillary beds separated by the intervening efferent arteriole. The 1st capillary bed (the glomerulus) produces the filtrate The second capillary bed (peritubular capillaries) reclaims most of that filtrate Vasa recta - bundles of long straight vessels that run beside the loops of Henle deep into the medulla.

33 Bladder It lies retroperitoneally on the pelvic floor posterior to the pubic symphysis Males: Prostate gland surrounds the neck inferiorly Females: Anterior to the vagina and uterus The bladder wall has three layers Transitional epithelial mucosa A thick muscular layer A fibrous adventitia 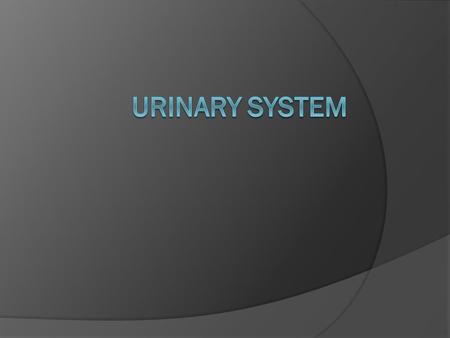 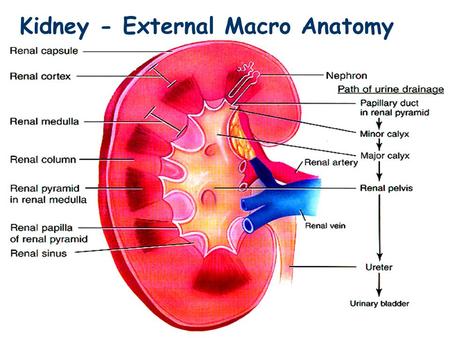 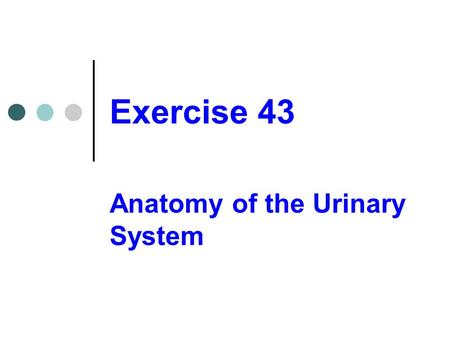 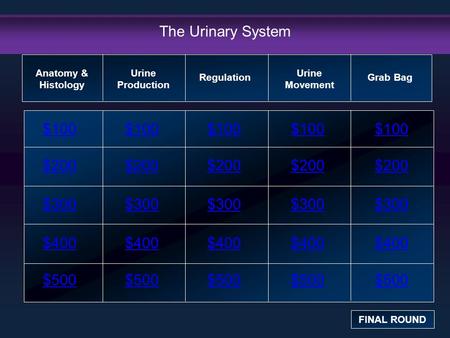 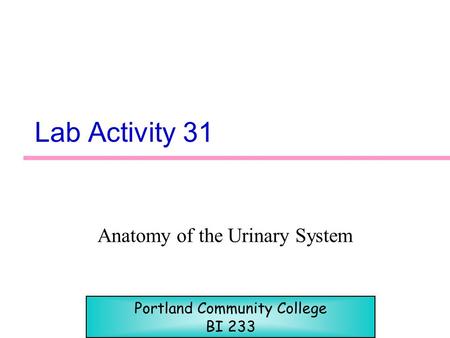 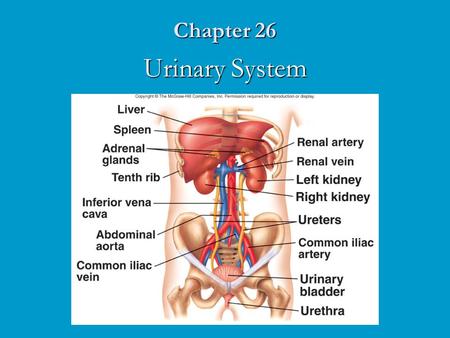 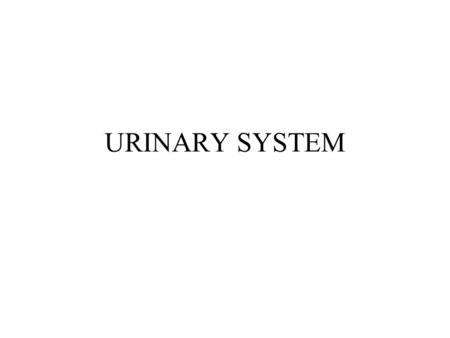 URINARY SYSTEM. KIDNEY STRUCTURE CAPSULE – CORTEX – MEDULLA The cortex is characterized by renal corpuscles and their tubules The medullary ray is an. 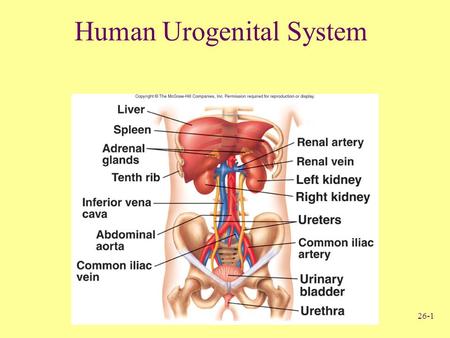 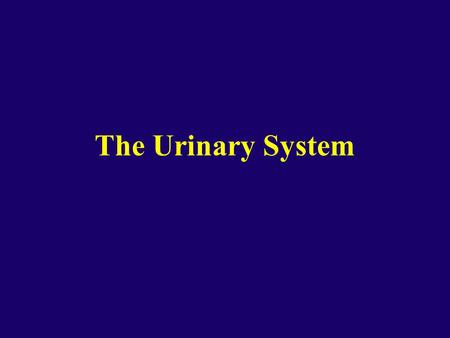 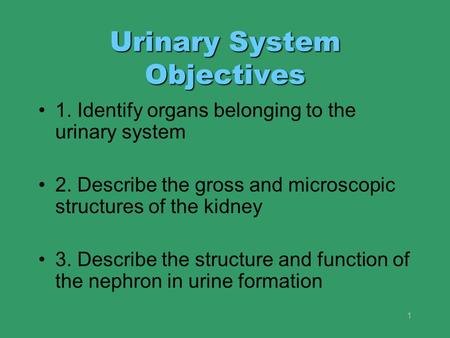 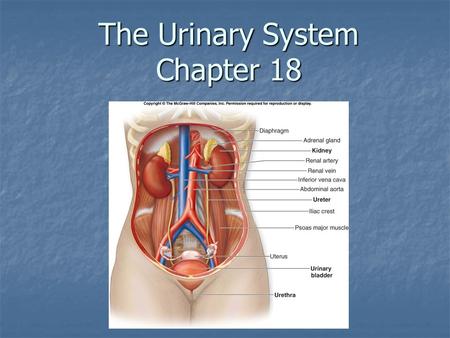 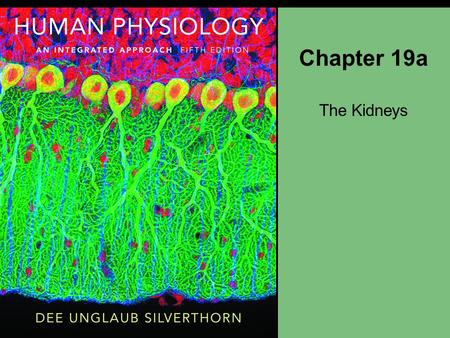 Chapter 19a The Kidneys. 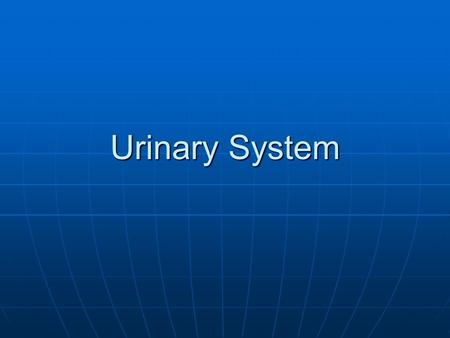 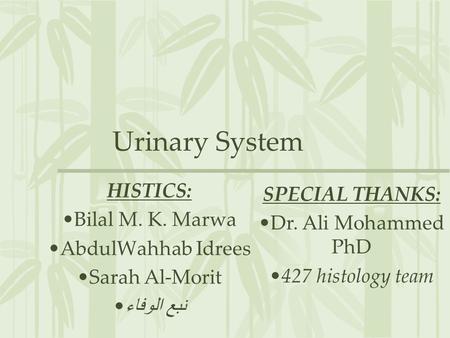 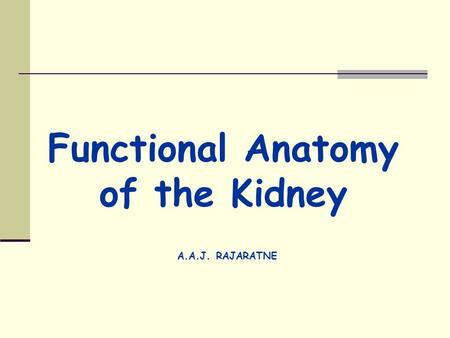 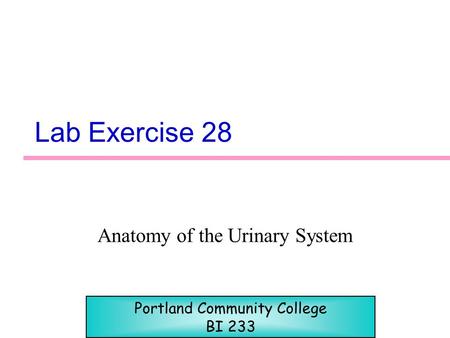 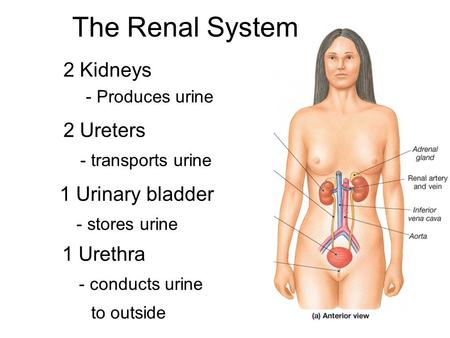 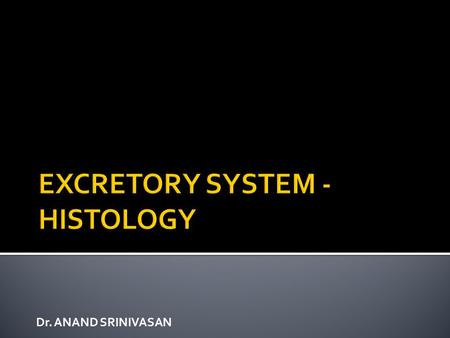 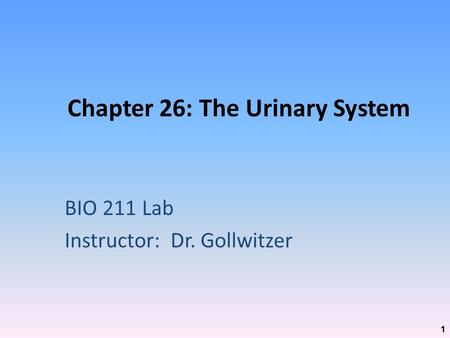