6 Cold and Warm Fronts  A cold front occurs when colder air advances toward warm air. o The cold air wedges under the warm air. o As the warm air is lifted, it cools, condenses, and forms clouds. o When the temperature difference between cold and warm air is large, thunderstorms and tornadoes may form.  Warm fronts form when lighter, warmer air advances over heavier, colder air. o Warm air slides over colder air and forms a boundary with a gentle slope. o This can lead to hours or days of wet weather.

8 Occluded and Stationary Fronts  An occluded front involves three air masses: colder air, cool air, and warm air. o An occluded front forms when a cold air mass moves toward cool air with warm air in between the two. o The colder air forces the warm air upward,closing off the warm air from the surface.  A stationary front occurs when a boundary between air masses stops advancing. o Stationary fronts may remain in place for several days and produce light wind and precipitation.

10 Thunderstorms  Thunderstorms occur in warm moist air and along fronts. o Warm moist air is forced upward where it cools and condensation forms a cumulonimbus cloud. o Within the cloud, small droplets collide to form larger ones, and the droplets fall towards the Earth’s surface. o Raindrops cool the air and this cool, dense air spreads over Earth’s surface. o Strong winds form from the mixing of dense, rain cooled air and updrafts of warmer air o Hail may form as ice crystals fall to warmer layers and are lifted in colder layers by the strong updrafts in the cloud.

11  The movement of air within the cloud can cause different parts of a cloud to become oppositely charged. o When current flows between regions of opposite electrical charge, lightening flashes.  Thunder results from the rapid heating and cooling of air around a bolt of lightening, which can reach five times the temperature of the surface of the Sun. o This extreme heat causes air to expand, then cool and quickly contract. o The rapid movement of molecules forms sound waves heard as thunder.

12 Tornados  In severe thunderstorms, winds at different heights blow in different directions and at different speeds. This air is called wind shear. o Wind shear creates a rotating column parallel to the ground. o The updraft in a thunderstorm can tilt the column upward into the cloud, creating a funnel cloud. When the funnel comes into contact with the Earth’s surface, it is called a tornado.

13 Hurricanes  A hurricane is a large, swirling low pressure system that forms over the warm Atlantic Ocean. These storms turn heat energy from the ocean into wind.  A storm must have winds of at least 74 mph to be called a hurricane.  These storms are called typhoons in the Pacific Ocean and cyclones in the Indian Ocean.  Hurricanes are similar to low pressure systems on land, but they are much stronger. o Low pressure develops near the equator. In the northern hemisphere the winds around the low pressure begin to spin counterclockwise.

14  The hurricanes that hit North America begin as a low pressure system west of Africa. o These storms travel west, gaining in strength from the heat and moisture of the warm ocean water.  When a hurricane strikes land, high winds, tornadoes, heavy rains, high waves, and flooding cause major damage.  The storm loses power over land because it is cut off from its energy supply of warm, moist air. 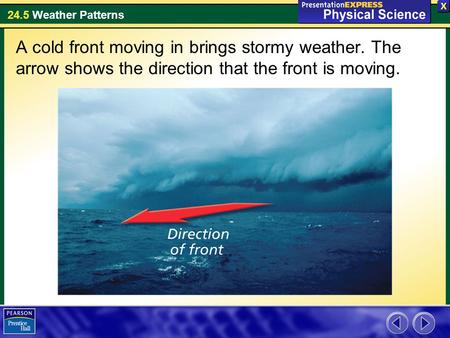 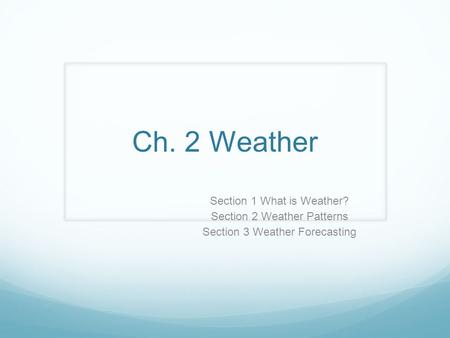 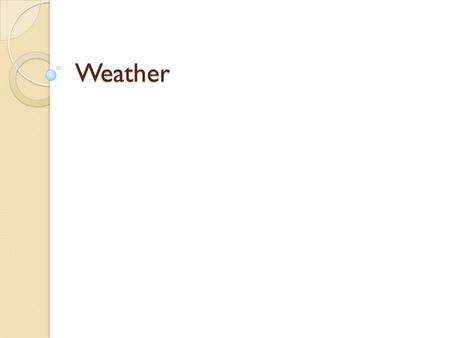