Presentation on theme: "Severe Weather What is Severe Weather? Severe weather is any kind of weather that causes property damage or even death What are some examples of severe."— Presentation transcript:

4 Thunderstorms A thunderstorm is a small, intense weather system that can produce strong winds, heavy rain, thunder and lightning. Thunderstorms occur along cold fronts, but they can also develop in other places. The only two atmospheric conditions necessary to produce a thunderstorm are: warm moist air near Earth’s surface and an unstable atmosphere.

6 So how does a Thunderstorm Form? When a rising warm air mass hits its dew point the water vapor in the air condenses and forms cumulus clouds. When the atmosphere is unstable the warm air will continue to rise and cause the cumulus clouds into huge dark cumulonimbus clouds. These cumulonimbus clouds can reach heights greater than 15km (over 9 miles)

7 Why is it Called a Thunderstorm? Thunderstorms have a lot of electrical activity inside them, this can be seen by the lightning which happens during all thunderstorms. Lightning is an electrical discharge that occurs between a positively charged area and a negatively charged area. It can occur between two clouds, between Earth and a cloud, and even between two parts of the same cloud.

8 Lightning Lightning is believed to be created by friction between the rising updraft and the falling downdraft in a cumulonimbus cloud This friction creates a separation of charges (kinda like rubbing your feet across the carpet in your socks) Eventually there is a discharge between positive and negative charges, creating a “spark” (kinda like touching that doorknob and getting a shock) On a larger scale, that “spark” is a bolt of lightning

10 Thunder When lightning strikes, the “bolt” can be as hot as 30,000 degrees The air surrounding that bolt of electricity expands rapidly (remember… warm air expands), and then contract quickly as it cools. Because of the extremely high temperatures involved, the air expands and contracts rapidly enough to break the sound barrier (767 mph) The thunder is a “sonic boom”

11 How Bad can a Thunderstorm be? Severe thunderstorms can produce any or all of the following conditions: high winds, hail, flash floods, and tornadoes. Hailstorms brought on by thunderstorms can damage crops, dent metal, and break windows, and flash floods are the leading cause of weather related deaths. Remember all thunderstorms have lightning. Lightning is responsible for starting thousands of forest fires and for killing or injuring hundreds of people every year.

12 Tornadoes Only about 1% of all thunderstorms produce a tornado. A tornado is a small, spinning column of air that has high wind speeds and a low central pressure that touches the ground. Tornadoes start out as funnel clouds that poke out through the bottom of a cumulonimbus cloud and hang in the air. It does not actually become a tornado until the bottom of the funnel touches the ground.

17 How do Tornadoes Form? The spinning column of air moves to the bottom of the cumulonimbus cloud and starts to form a funnel cloud. The funnel cloud continues to grow until it touches the ground and then it has become a tornado.

20 Tornado Facts Tornadoes are 400-500 feet wide. Tornadoes have winds around 100 miles per hour. Tornadoes last only a few minutes. Some monster tornadoes are a mile wide, have winds up to 300 mph, last an hour or more, and travel 200 miles. Tornadoes occur most often in the spring (April- June) Most tornadoes in the US occur along “Tornado Alley,” an area that runs from Texas to Illinois.

23 Tornado Precautions Go to a basement, if you have one. Get in the innermost room of your house. Avoid rooms with windows. Bathrooms are good. Crouch with arms above your head. If outside, lie in a ditch or get under a bridge. If you live in an area with a frequency of tornadoes, listen to forecasts.

25 Formation of a Hurricane Hurricanes are storms that form over tropical waters. The hurricanes that affect the eastern coast of the United States form off the western coast of Africa where the water is warm, the air is humid, and the winds converge.

26 Hurricanes start out as a group of storms that begin to rotate when they meet converging winds. These storms create violent seas that send more moisture into the air. The water vapor rises and helps the wind increase in speed. If the storm holds itself together for 24 hours, we call it a tropical disturbance. Tropical Disturbance

29 Hurricanes A tropical storm becomes a hurricane when its winds exceed 73 mph.

31 Hurricanes can be very big, even as big as the state of Ohio! They can be seen from outer space. The entire formation and life of a hurricane takes days or weeks. Because hurricanes seldom travel in straight paths, meteorologists predict several paths. Hurricanes usually lose power as they travel over land. Hurricanes destroy beaches, buildings, and vegetation. Hurricanes bring strong winds, heavy rain, storm surges, flooding, and tornadoes. Hurricane Facts

32 Hurricane Protection Watch weather forecasts. Board up all windows and doors Have bottled water, food, batteries, medicine, and important documents Call someone and let them know where you are Photograph valuables for insurance Take care of your pets

Download ppt "Severe Weather What is Severe Weather? Severe weather is any kind of weather that causes property damage or even death What are some examples of severe." 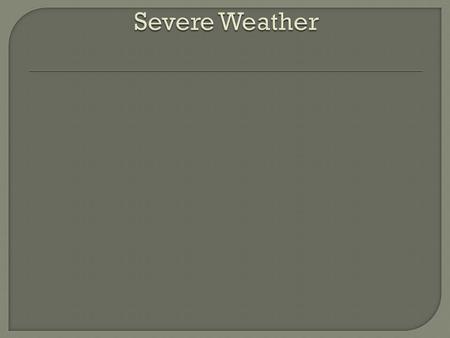 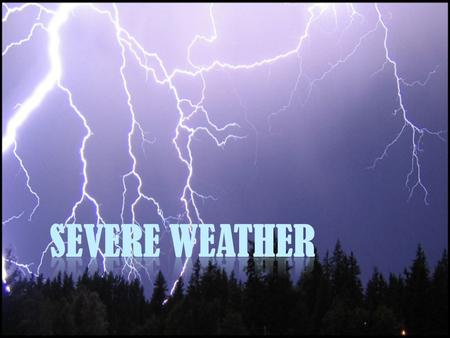 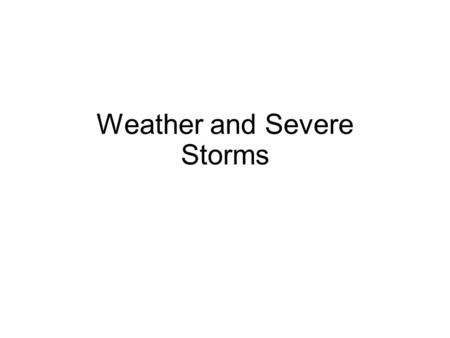 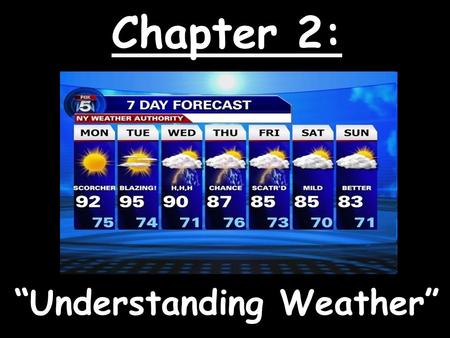 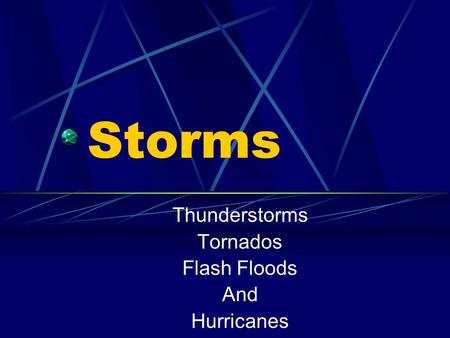 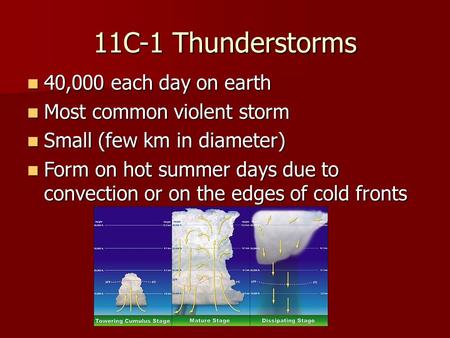 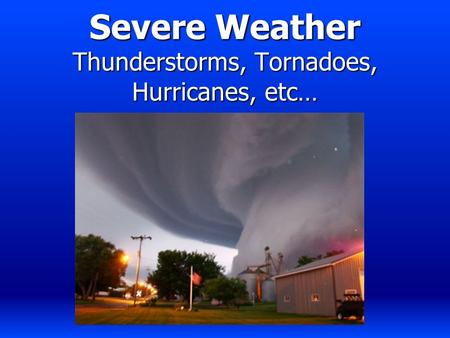 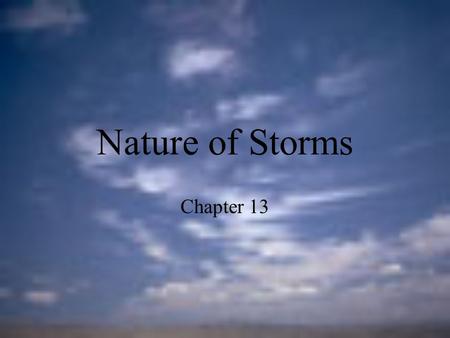 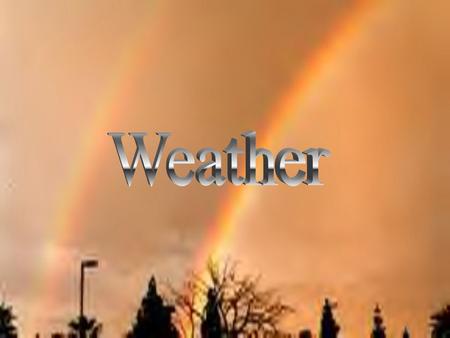 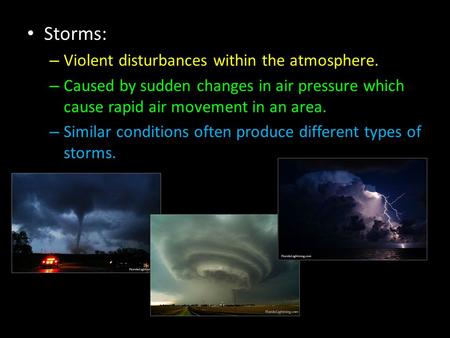 Storms: Violent disturbances within the atmosphere. 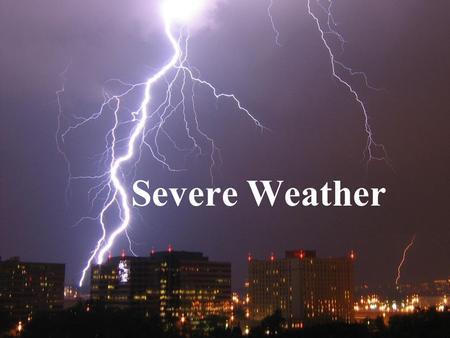