Presentation on theme: "Making Compounds. Chemical compounds form so that each atom has an octet of electrons in its valence level. This can occur by gaining, losing or sharing."— Presentation transcript:

2 Chemical compounds form so that each atom has an octet of electrons in its valence level. This can occur by gaining, losing or sharing electrons.

3 Octet Rule Octet Rule – 8 is Great!! ► An atom is stable when it has a full valence layer, an electron configuration like the nearest Noble Gas. ► Atoms gain or lose valence electrons to become stable  a positive cation has lost electrons  a negative anion has gained electrons

4 Formation of Ions ► Atoms gain or lose valence electrons to become stable ► Atoms want their outer shell to be full ► Noble gases have a full shell already so rarely bond with other elements ► By gaining or losing electrons, elements have the same number of valence electrons as the noble gasses (known as the octet rule)

5 Remember…Formation of Ions ► The number of electrons that an atom can gain or lose depends on the number of valence electrons. SbSb In general, metals lose electrons, nonmetals gain them to become stable. + 3e - -3 Rb Rb + + e -

6 Ionic Compounds ► Ionic bonding is the combining of two or more ions to form an electrically-neutral compound. ► The negatively and positively charged ions are attracted to each other (like a magnet) based on their opposite charge.

7 Ionic Compounds ► Ionic Compounds form when there is a transfer of electrons between a metal and non metal. ► The ionic compound they form is electrically neutral. The sum of the charges of the positive ions equals the sum of the charges of the negative ions ► When placed in water, the ionic compound dissociates into its respective ions. This may result in the solution being able to conduct electricity.

12 Properties of Ionic Compounds Crystal Pattern – every ion is attracted to all other ions with the opposite charge. This results in a repeating 3-dimensional pattern Chloride ion Sodium ion

14 Covalent Compounds ► When electrons are not transferred from one atom to another, they share electrons. ► Covalent compounds share electrons to achieve stable noble gas electron configurations. 1 bond = 2 shared electrons

15 Steps for Drawing Lewis Structures 1. Count the total number of valence e - 2. Identify the central atom (the first atom written unless it is H) 3. Draw the Lewis diagram for the central atom and place all other atoms around it 4. Complete the octet for all atoms by pairing up unpaired e - between atoms. Each pairing represents 1 bond. 5. Check your structure by counting the number of valence e - around each atom.

Download ppt "Making Compounds. Chemical compounds form so that each atom has an octet of electrons in its valence level. This can occur by gaining, losing or sharing." 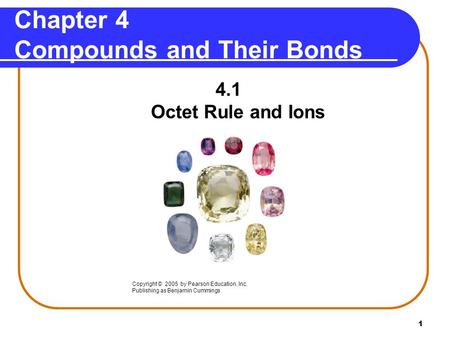