Presentation on theme: "RSS, London 8 May 2006 Challenges in measuring Violence Against Women within the framework of official statistics across countries Angela Me Chief Social."— Presentation transcript:

1 RSS, London 8 May 2006 Challenges in measuring Violence Against Women within the framework of official statistics across countries Angela Me Chief Social and Demographic Statistics Section United Nations Economic Commission for Europe

3 RSS, London 8 May 2006 Beijing PoA Develop improved gender-disaggregated and age-specific data on the victims and perpetrators of all forms of violence against women, such as domestic violence, sexual harassment, rape, incest and sexual abuse, and trafficking in women and girls, as well on violence by agents of the State UN Mandate

4 RSS, London 8 May 2006 UN General Assembly Any act of gender-based violence that results in, or is likely to result in, physical, sexual or psychological harm or suffering to women, including threats of such acts, coercion or arbitrary deprivation of liberty, whether occurring in public or in private life How can VAW be defined?

6 RSS, London 8 May 2006 The challenge are to have a broad approach to the measurement of violence and include all types. Often official statistics has a narrow focus to VAW (rape, intimate partner violence) operationalize the definition adapt the data source to measure all forms of violence How can VAW be defined?

8 RSS, London 8 May 2006 How can VAW be measured? Shortcoming of traditional sources Coverage They do not cover all form of VAW (psychological) They cover ONLY REPORTED crimes This is a limitation particularly for domestic violence (among the most common forms of VAW)

10 RSS, London 8 May 2006 Other existing Sources? Service-based Data Can provide a valuable source to show the limited number of cases covered by police records for example Can be used to monitor women that come forward for help Can provide case studies to study the root causes of violence and the circumstances Can help to estimate the cost to society to responding to VAW Can be used to estimate the need for training among service providers

11 RSS, London 8 May 2006 Other existing Sources? HOWEVER …..Service-based Data Can NOT be used to measure the prevalence of violence in a country or community Suffer the same problem of undercounting (not all women report to services and those that do report tend to be the most seriously injured)

12 RSS, London 8 May 2006 Other existing Sources? Health Services Potentially they could become a more effective source of data by increasing disclosure through routine enquiry about violence and developing capacity to record, analyze and report the data on VAW Obligatory reporting of VAW by health workers? The effect of these two issues is still under debate

13 RSS, London 8 May 2006 Population-based sample surveys Reach women to ask about their experience on VAW They reflect actual occurrences of victimization rather than what is reported to officials They are the MOST RELIABLE method for collecting official statistics on the extend of VAW

15 RSS, London 8 May 2006 Ad-hoc Module in surveys An ad-hoc module on VAW could be included in on-going surveys under the following conditions : A full instrument is added (not only a limited number of questions) The safety of the women is not compromised The on-going survey deals with similar topics (health, victimization)

17 RSS, London 8 May 2006 Methodological challenges How to ask women about their experience with violence (questionnaire design) Single direct questions or multiple behaviorally specific questions (Have you ever been slapped, kicked, or beaten?). Behavior-based questions are considered more effective. Important to avoid words such as rape, abuse Reference period of victimization Lifetime (used particularly for rape and sexual abuse) Previous 5 years, previous 12 months, previous 6 months The shorter the period, the more accurate are the data and larger the sample needs to be

18 RSS, London 8 May 2006 Methodological challenges Reference population 15-49 15 or 18 years and plus Only married or with partner Male population Information collected Perpetrators (relationship with the victimized woman) Injuries (very difficult to standardize it)

19 RSS, London 8 May 2006 Methodological challenges What to report Prevalence (example: percent of women 15-49 who were victimized in the previous 12 months) Severity (Number of beating by 1,000 women 15-49) Testing of Questionnaire Mode of data collection Encourage the disclosure of the information Affordable

20 RSS, London 8 May 2006 Methodological challenges Safety of women at first Protect confidentiality of the data During the interview In the storage and dissemination of the data Specialized training of interviewers Technical Gender-sensitization Emotional (dealing with sensitive issues) Select proper women interviewers Filed staff should be trained to refer women requesting assistance to available sources of support

21 RSS, London 8 May 2006 Methodological challenges Safety of women at first WHO Ethical and Safety Guidelines for Researching Domestic Violence against Women

22 RSS, London 8 May 2006 Institutional challenges Traditionally official statistics have provided VAW statistics only through administrative sources (court, police records) VAW surveys have not yet been seen as part of official statistics in many countries Although research or advocacy groups have an essential role in measuring and studying VAW, official statistics should provide policy-makers with the data needed for good governance under the principles of independence, integrity, impartiality, confidentiality

23 RSS, London 8 May 2006 Institutional challenges Measuring VAW with the proper data collection tools is NOT an issue of a selected number of women but it is a national policy concern VAW Surveys should be fully integrated into national statistical systems

27 RSS, London 8 May 2006 Prevalence of Sexual assault-sexual violence in women

32 RSS, London 8 May 2006 International/Regional level A great deal of work has been already carried out at international level to develop standard survey modules (WHO, DHS, IVAWS) Building on this work national statistical systems should be guided on how to design and carry out national surveys as part of official statistics for a sustainable collection of VAW statistics

33 RSS, London 8 May 2006 International/Regional level As it appeared at the International Expert Group Meeting organized by UNDAW in collaboration with ECE and WHO, There is still no agreement on indicators prevalence or incidence? attitude as proxy for prevalence? severity No agreement on core content, methodology

34 RSS, London 8 May 2006 International/Regional level Encouraging steps - EU-Eurostat interest on victimization surveys - ECE inventory of national VAW surveys - Explore different methodology - Explore the areas where it is possible to find common approaches - WHO Guidelines on how to collect data on VAW for research

Download ppt "RSS, London 8 May 2006 Challenges in measuring Violence Against Women within the framework of official statistics across countries Angela Me Chief Social." 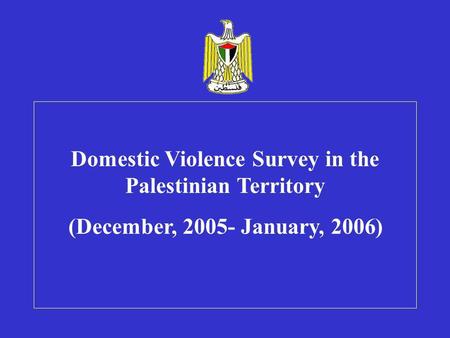 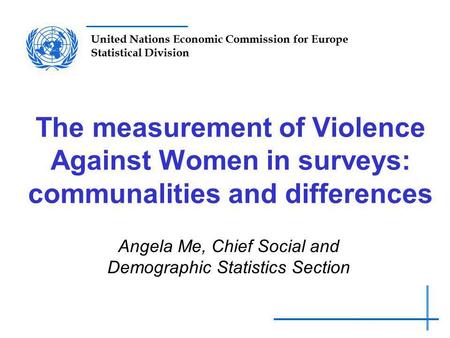 United Nations Economic Commission for Europe Statistical Division The measurement of Violence Against Women in surveys: communalities and differences. 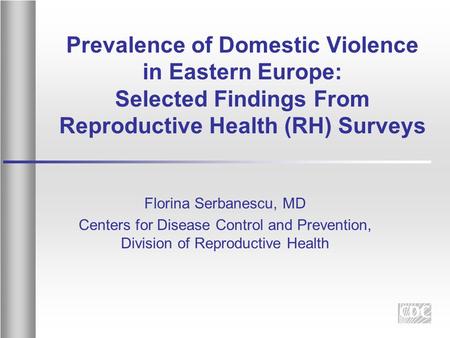 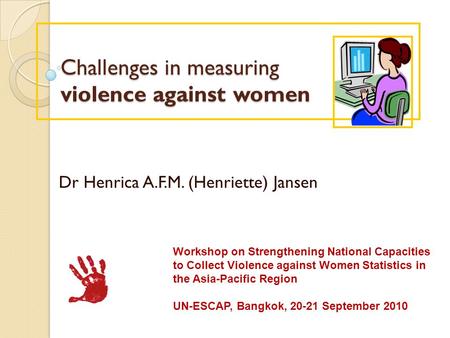 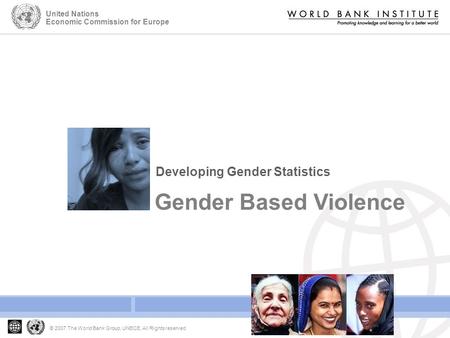 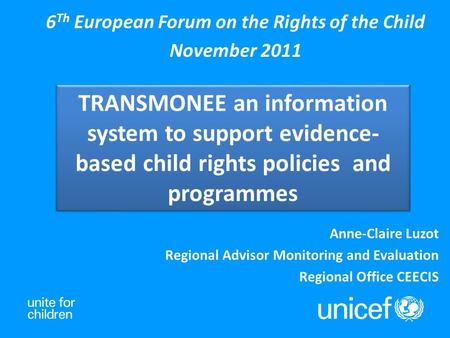 TRANSMONEE an information system to support evidence- based child rights policies and programmes 6 Th European Forum on the Rights of the Child November. 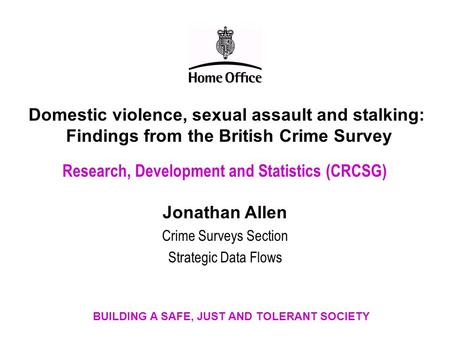 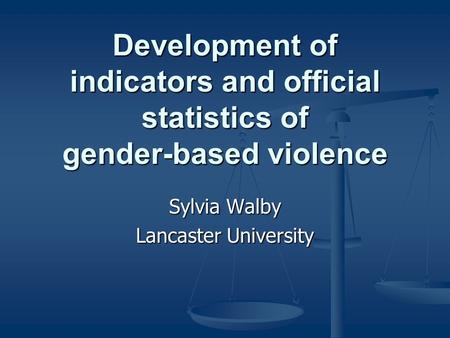 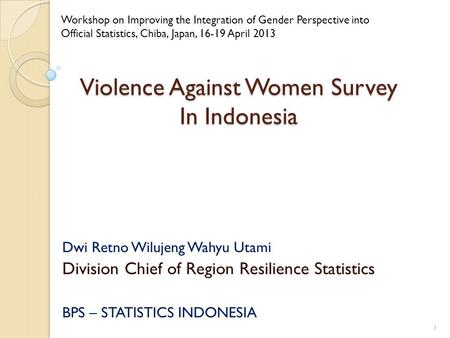 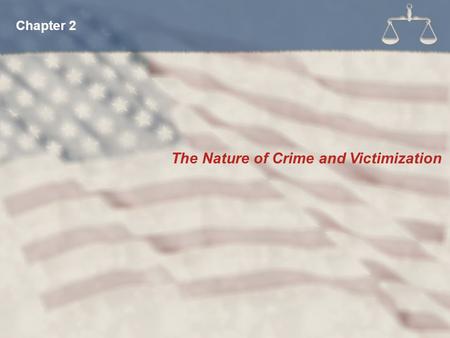 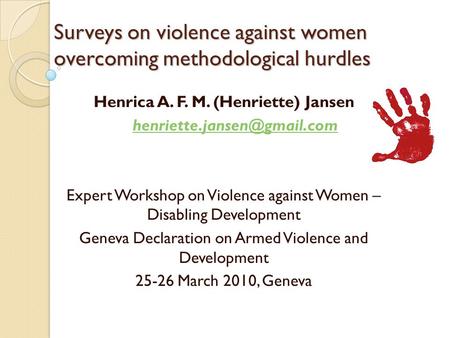 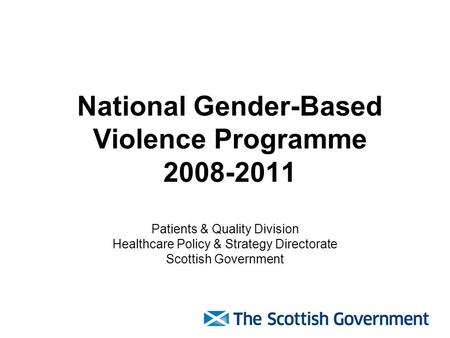 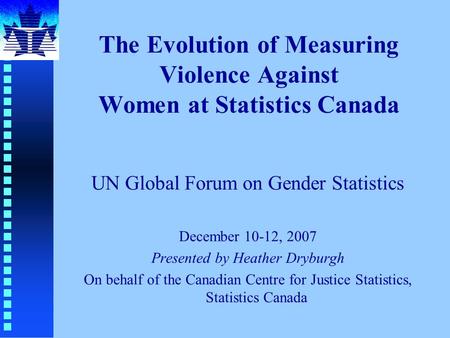 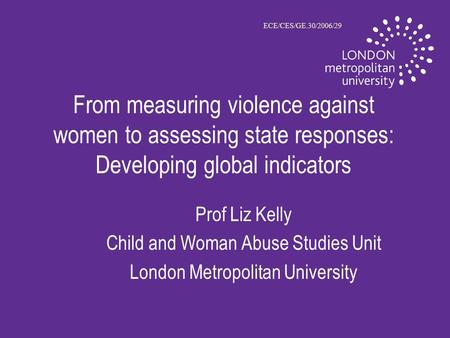 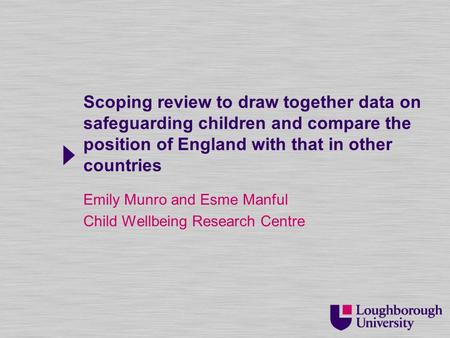 Scoping review to draw together data on safeguarding children and compare the position of England with that in other countries Emily Munro and Esme Manful.