2 "Those that don't got it, can't show it. Those that got it, can't hide it.“ -Zora Neale Hurston "When peoples care for you and cry for you, they can straighten out your soul.“ "An artist must be free to choose what he does, certainly, but he must also never be afraid to do what he might choose." -Langston Hughes

4 The Harlem Renaissance was a cultural movement that spanned in the 1920’s-1930’s. Also known as the “New Negro Movement,” which consisted of music, literature, art, and poetry.

5 African Americans wanted to escape the segregation that they knew all their lives. Therefore, many migrated to Harlem, New York to find better educational and economic opportunities.

6 Literary Elements The Harlem Renaissance can be described as a cultural epidemic in which African- Americans began to reach out of their shell and transform themselves into “a new negro.” This movement is a flowering of African- American literature, art, and music during the early 1920s. When the Harlem Renaissance is mentioned, significant figures such as Langston Hughes, Countee Cullen, Jean Toomber, W.E.B. DuBois, and James Baldwin are one of the many names that come to mind.

7 The Harlem Renaissance was first referred to as "The New Negro Movement." To express themselves, African-Americans found many ways, such as music-like jazz and the blues, dancing that mainly praises their culture, and paintings-some even of naked women. However, he black renaissance and cultural revolution that took place in Harlem, New York between the World Wars was much more than these images. It was a profound literary and political movement as well. In this time period, African-Americans still had little to no rights. They were trying to make names for themselves and they were determined to do everything they possibly could to enhance the black race. The negro life was said to have been seizing upon its first chances for group expression and self- determination. Instead of using more direct political means, African-American artists and writers employed culture to work for goals of civil rights and equality. And for the most part, jazz, African-American paintings, and books were absorbed in mainstream culture.

8 Since the mid-to-late nineteenth century, European moderns declared their artistic and intellectual difference from the more conservative schools of art by painting carousers in cafes, decadent circus performers, prostitutes, and their clients in bordellos.

9 During The Harlem Renaissance, African-Americans tried their hardest to make a new name for themselves. They wanted to introduce America to a new style of living. One of the main goals of the black writers and intellectuals of the Harlem Renaissance was to show the Negro as a capable individual. Providing a positive self-image for the Negro was not an easy task. The Harlem Renaissance succeeded in depicting the Negro as an individual who was capable of making great achievements if given the opportunity. However, continued injustices against Negroes forced black intellectuals into the harsh realization that prejudice against Negroes was deeply rooted in American society. It was useless trying to show white America that the Negro had “worth” and could become a contributing individual.

10 During The Harlem Renaissance, African-Americans were still mistreated even though they were making names for themselves, becoming entrepreneurs, and even making their own music. Unfortunately, white America didn't care and was still degrading to blacks. The Cotton Club was an exclusively white club that African Americans that where musically talented where able to demonstrate their musical ability at but weren't allowed to attend, ironically. Many famous Harlem Renaissance artists played there, although in the shows there would be several racist implications because that is what appealed to white people in that era. The music played was primarily swingy jazz, but there would performances as well, such as acting and talent show like demonstrations. Since the public enjoyed the concept of blacks being inferior, a lot of the shows were based around the jungle and how "uncivilized" Blacks were. At the time, people where looking for excitement because of the prohibition, and that is one of the reasons clubs such as this where so popular. Clearly, racism was an extreme obstacle for African-Americans, but still, that did not stop them from branching out an expressing themselves.

11 Harlem became known as the “hotbed” for many political debated through its popularity.

12 The Harlem Renaissance encouraged people to become very creative and philosophical through its religious creativity.

13 The Harlem Renaissance consisted of many poetic people who expressed their selves through literature.

16 February 1, 1902 – May 22, 1967. Hughes was an American Poet, novelist, playwright, and columnist. He was one of the earliest to introduce Jazz Poetry. Famously wrote about the Harlem Renaissance.

17 February 23rd, 1868-August 27th, 1963. An African American intellectual leader of the United States. He graduated from Harvard University and was the first black American to earn a doctorates degree from Harvard.

18 Garvey encouraged all black Americans to come together as one. 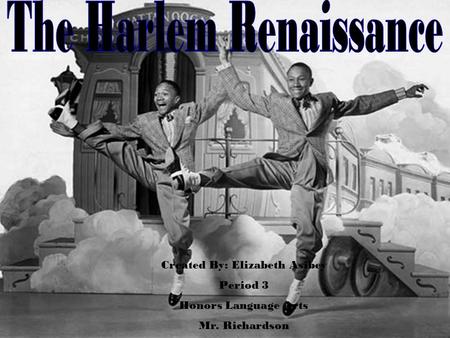 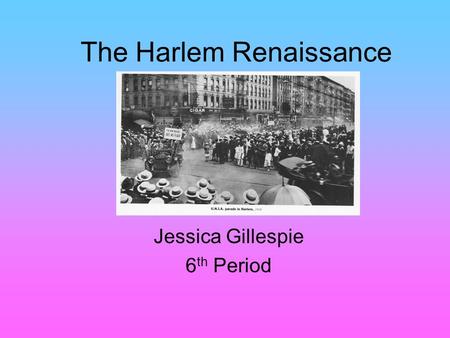