2 W HAT IS C ULTURE ? Culture, the shared products of human groups, comes in two forms- material and nonmaterial. It should not be confused with the term society, which refers to a group of people who share culture and a feeling of unity. In short, societies are people, and culture refers to the components people create. Material culture = physical objects such as books, clothing, utensils, etc. Nonmaterial culture = abstract human creations, such as beliefs, language, ideas, etc.

3 C OMPONENTS OF C ULTURE There are 5 basic components of culture that all societies have some form of. They are: Technology Symbols Language Values Norms

4 C OMPONENTS OF C ULTURE Technology Combination of objects and rules for using them. Items of material culture, and the knowledge of how to use them. Also incorporates ideas. Symbols Anything that represents something else and has a shared meaning. Form of communication between members of a society. Though the symbols may be different, they are used the same from culture to culture.

5 C OMPONENTS OF C ULTURE Language Organization of written or spoken symbols into a standardized system. Values Shared beliefs about what is good or bad, right or wrong, desirable or undesirable. Help determine the character of a group of people. Norms Shared rules of conduct that tell how to act in a given situation. Expectations of behavior  not everyone’s actions will be in line with these.

6 T YPES OF N ORMS Folkways = socially acceptable behavior that do not have great moral significance attached. Common customs of everyday life. Examples: Eating steak with utensils instead of your hands Covering your mouth when you yawn Shaking hands when you meet someone Mores = great moral significance attached; otherwise, the stability of society would be upset. Examples: Dishonesty, fraud, aldultery

7 V IOLATION OF M ORES Societies have established laws for when mores are violated. Written rules of conduct enacted and enforced by the government. However, not all laws are established for mores– some are in place to enforce folkways, such as not parking in a handicap spot.

8 E XAMINING C ULTURE Culture is dynamic rather than static– it changes over time. Cultures adapt as the world around us changes. Sociologists study culture on three levels of complexity: Cultural traits Cultural complexes Cultural patterns 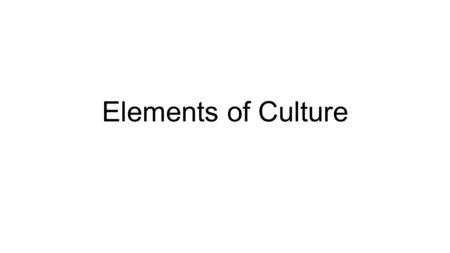 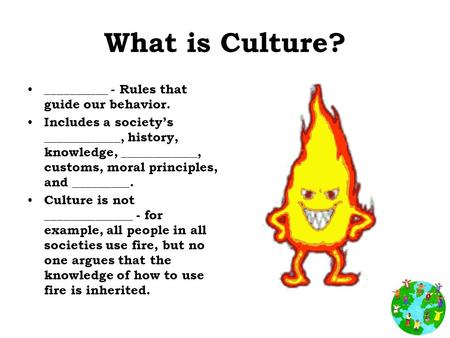 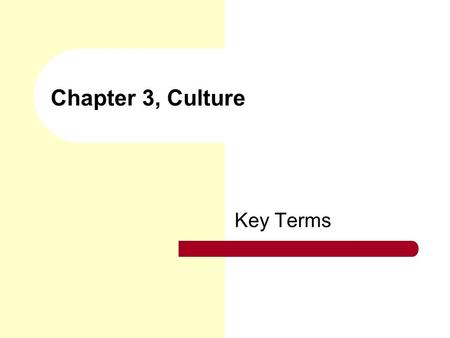 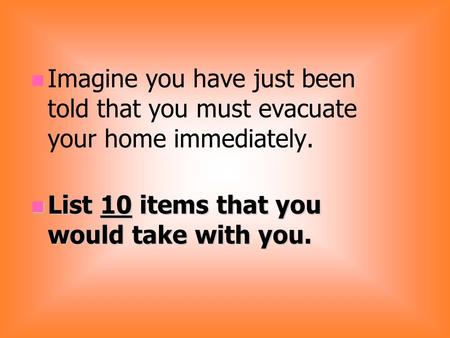