Dose Interruption/Reduction of Tyrosine Kinase Inhibitors in the First 3 Months of Treatment of CML Is Associated with Inferior Early Molecular Responses.

Presentation on theme: "Dose Interruption/Reduction of Tyrosine Kinase Inhibitors in the First 3 Months of Treatment of CML Is Associated with Inferior Early Molecular Responses."— Presentation transcript:

1 Dose Interruption/Reduction of Tyrosine Kinase Inhibitors in the First 3 Months of Treatment of CML Is Associated with Inferior Early Molecular Responses and Predicts for an Increased Likelihood of Discontinuation of the 1 st Line Agent Apperley JF et al. Proc ASH 2013;Abstract 93.

2 Background In chronic myeloid leukemia (CML), rapid reductions in tumor load, defined by ≤65% Philadelphia chromosome negativity and/or BCR-ABL IS <10% at 3 months, are associated with an improved probability of complete cytogenetic response (CCyR) and better progression-free survival (PFS) and overall survival (OS). However, about 15% to 20% of patients experience cytopenias shortly after starting tyrosine kinase inhibitor (TKI) treatment and receive drug interruptions and/or dose reduction. It is unclear whether these early periods of altered treatment should be considered in the interpretation of the results of BCR-ABL IS <10% at 3 months. Study objective: To investigate the effects of therapy interruptions and dose reduction during the first 3 months of therapy on the achievement of BCR-ABL IS <10% at 3 months, CCyR rate at 12 months and ability to remain on study. Apperley JF et al. Proc ASH 2013;Abstract 93.

6 BCR-ABL IS <1% (MR2) as a Surrogate for CCyR OutcomeIM0IM1-14IM>14 12-month MR2 rate78% 90% p-value0.5 DA0DA1-14DA>14 12-month MR2 rate96%88.6%79.5% p-value0.026 107/632 (17%) of patients had discontinued the study by 12 months, and qRT-PCR results were available for all remaining patients. These results confirm the superiority of DA over IM for MR2 and the potential impact of missing early doses of DA. However, it is not yet clear whether these results are related to inadequate dosing or whether failure to tolerate the recommended dose is indicative of higher-risk disease. Apperley JF et al. Proc ASH 2013;Abstract 93 (abstract only).

9 Author Conclusions Similar results were obtained using the number of days of missed drug (data not shown), suggesting that early failure to tolerate IM as first-line therapy does not affect subsequent responses because effective alternative therapy is available for the majority of patients. In contrast, failure to tolerate DA is associated with a reduced chance of MR3 at 12 months. Patients who experience cessation or reduction of either agent in the first 3 months are less likely to achieve BCR- ABL IS <10% at 3 months and are more likely to require a change of drug in the longer term. –Therefore, these patients require close observation during the first year. Apperley JF et al. Proc ASH 2013;Abstract 93.

10 Investigator Commentary: Interruption or Reduction of TKIs in the First 3 Months After Diagnosis of CML In this study, the investigators examined the important question of treatment continuation during the first 3 months after CML diagnosis and evaluated how this affects the probability of getting the best response at 3 months. They found that patients who undergo any treatment interruption, even for only a day, already have a diminished probability of a good response at 3 months. The more treatment the patient misses, the higher the probability that the patient’s disease will progress or undergo transformation. Interview with Jorge E Cortes, MD, January 24, 2014 Different reasons exist for dose interruptions, and each of them probably carries a different implication for long-term prognosis. If the interruption is due to nonmyelosuppressive toxicity, then the dose can be reduced or changed to a different TKI, and I believe the prognosis will be unchanged. Noncompliance and myelosuppression carry a different meaning because you expect these patients in the long run to have a lower incidence of CCyR or major molecular response and probably more adverse events such as transformation. Interview with Hagop M Kantarjian, MD, January 29, 2014

Download ppt "Dose Interruption/Reduction of Tyrosine Kinase Inhibitors in the First 3 Months of Treatment of CML Is Associated with Inferior Early Molecular Responses." 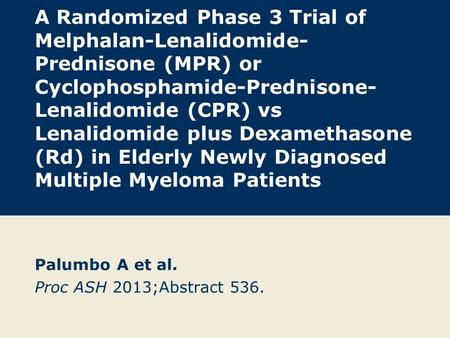 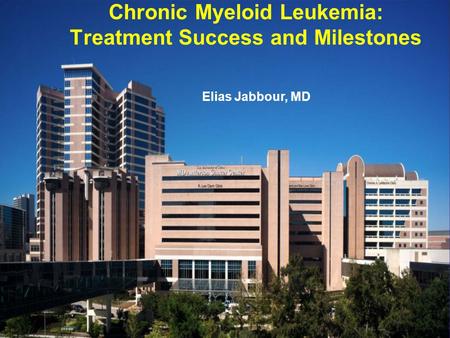 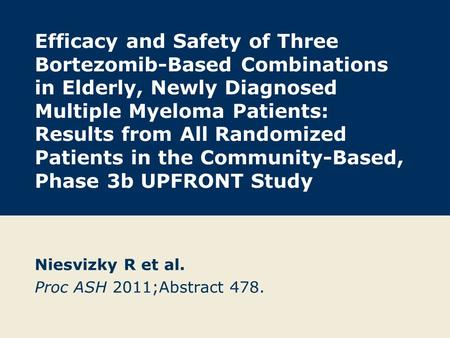 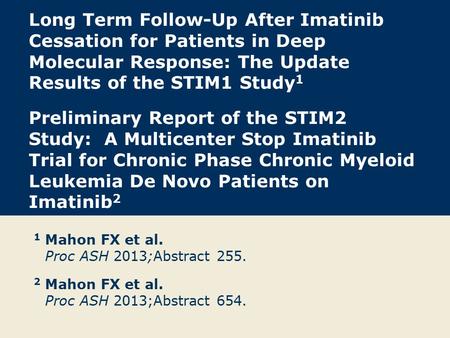 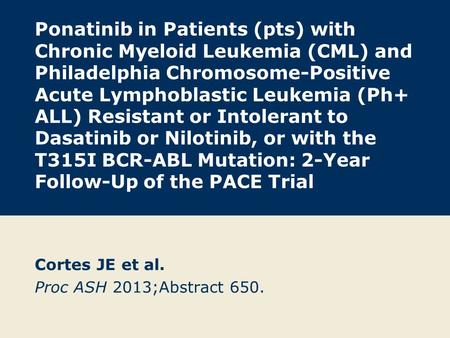 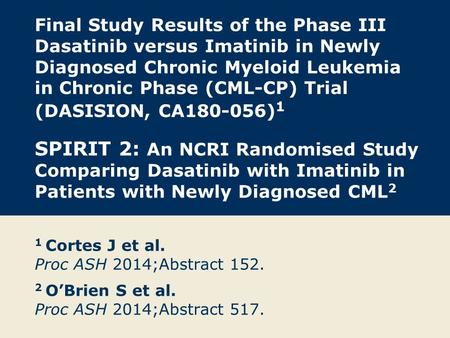 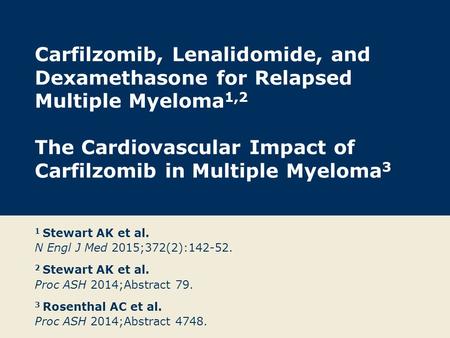 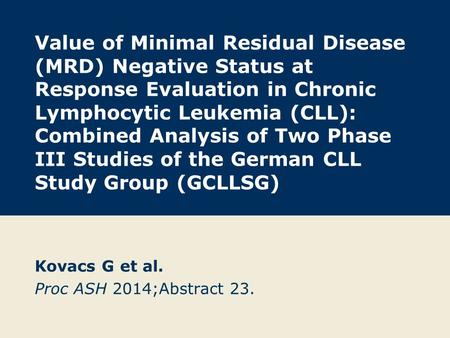 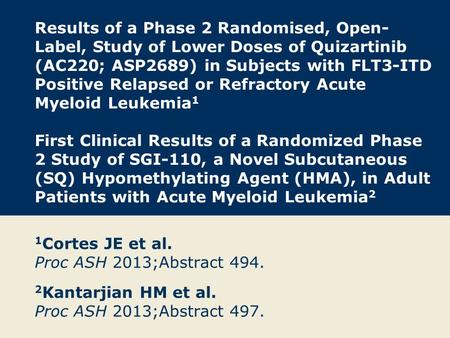 Results of a Phase 2 Randomised, Open- Label, Study of Lower Doses of Quizartinib (AC220; ASP2689) in Subjects with FLT3-ITD Positive Relapsed or Refractory. 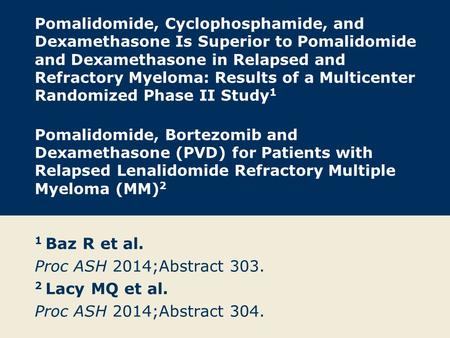 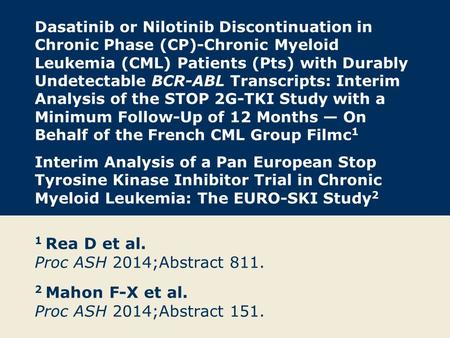 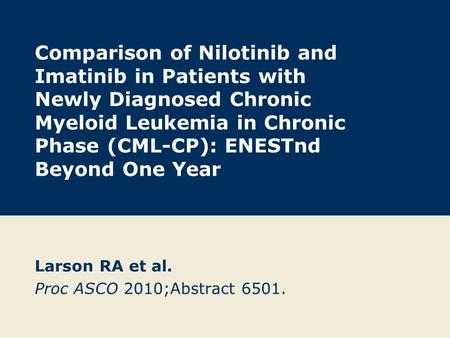 Comparison of Nilotinib and Imatinib in Patients with Newly Diagnosed Chronic Myeloid Leukemia in Chronic Phase (CML-CP): ENESTnd Beyond One Year Larson. 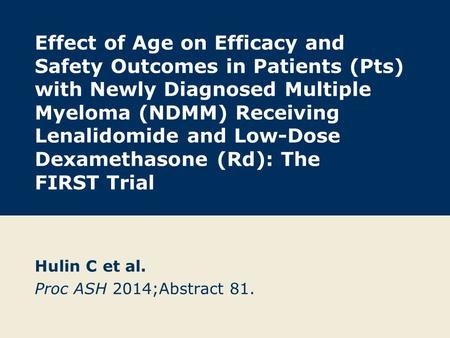 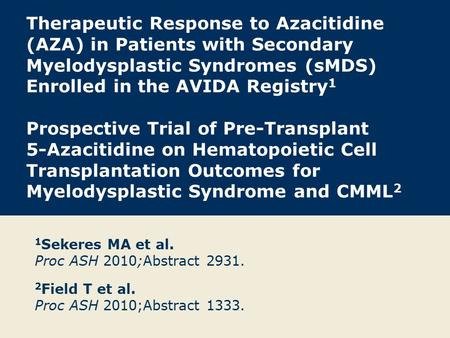 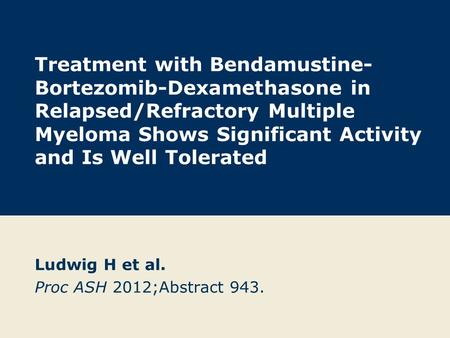 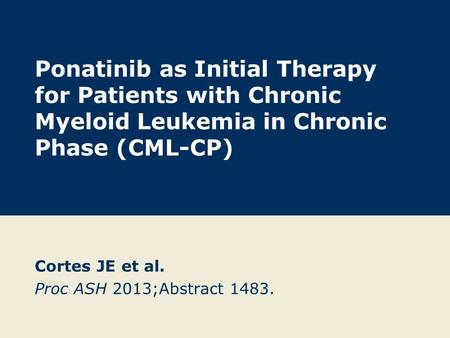 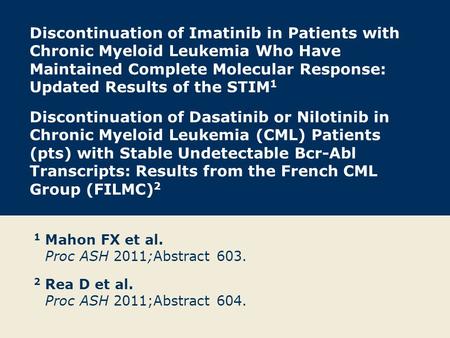 Discontinuation of Imatinib in Patients with Chronic Myeloid Leukemia Who Have Maintained Complete Molecular Response: Updated Results of the STIM 1 Discontinuation. 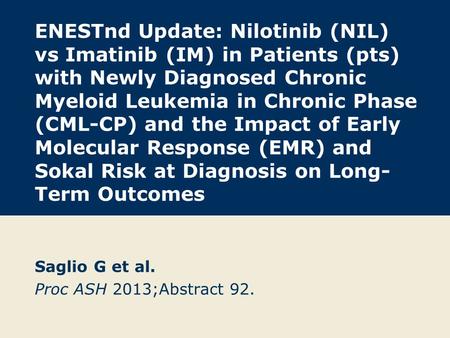 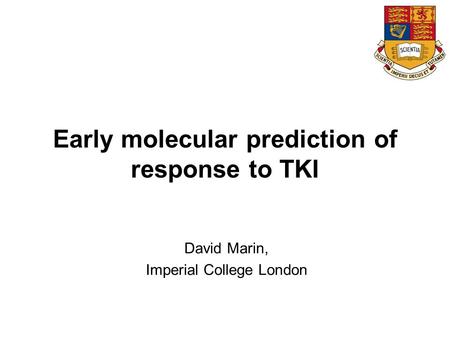 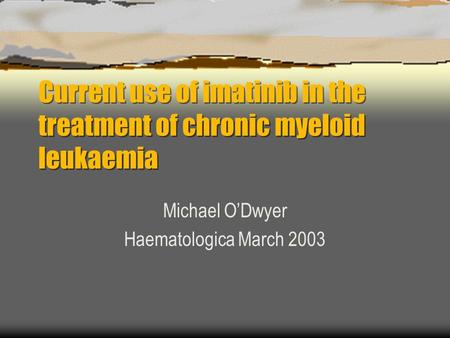 Current use of imatinib in the treatment of chronic myeloid leukaemia Michael O’Dwyer Haematologica March 2003.