What It Was Like For The People of America

Presentation on theme: "What It Was Like For The People of America"— Presentation transcript:

3 Family Life Many families lived together in 1 room shacks, caves or even sewer pipes Families survived off of wild weeds, buying leftover food and home grown food Marriage and divorce rate was down High desertion rate Birth rate below replacement rate Displaced children roamed the country Families were lucky to have one income, even if it was cut by 40% Homeless at an all time high 1931 southern pacific railroad kicked 683,00 “hobos” of their trains Families neglected healthcare to save money Many families sought to cope by planting gardens, canning food, buying used bread, and using cardboard and cotton for shoe soles. Despite a steep decline in food prices, many families did without milk or meat. In New York City, milk consumption declined a million gallons a day. Bud Fields and his family. Alabama or Walker Evans Lange, Migrant Mother

4 Labor of the Great Depression
One in Four people were unemployed Women became the breadwinners because they cold be paid lower wages Children were hired because their small size and lower wages Injuries were very common place his grocery clerk lost his arms in a dough-mixing machine at the age of 14 in the 1930's. By this time, there were only about .6 million children working. The highest number of children working was in 1910 at 2 million. Still, with .6 million children working, there still many injuries. Grocery Store Clerk

5 The Dust Bowl Drought hit Eastern US in 1930, and by 1934 the Great Plains was turned into a desert Affected 500 million acres(500 miles*300miles) Drought and poor agriculture practices Thousands fled to California for work but many stayed in the region After world war I the wheat market boomed and farmers bought new gasoline powered tractors to plow more ground so they could plant more wheat. When the depression hit wheat market dropped and the drought hit. Crops went with out harvest and when they dried up they could no longer hold the top soil to the ground like prairie grass did. Poor agricultural practices and years of sustained drought caused the Dust Bowl. Plains grasslands had been deeply plowed and planted to wheat. During the years when there was adequate rainfall, the land produced bountiful crops. But as the droughts of the early 1930s deepened, the farmers kept plowing and planting and nothing would grow. The ground cover that held the soil in place was gone. The Plains winds whipped across the fields raising billowing clouds of dust to the skys. The skys could darken for days, and even the most well sealed homes could have a thick layer of dust on furniture. In some places the dust would drift like snow, covering farmsteads. Many solutions were very out of the box ideas. People proposed to even pave over the plains to stop the dust, and a Texas town paid a man to shoot rockets into the clouds carrying an explosive mixture of dynamite and nitroglycerine to blow up in the clouds to try and “jump start” showers The dust bowl created a ton of static electricity between the ground and the air borne dust. Men shacking hands could be knocked to the ground by the shock and people driving cars through the area would drag chains behind the car to help ground them so the static electricity wouldn’t short the engine out. Those who inhaled the airborne prairie dust suffered coughing spasms, shortness of breath, asthma, bronchitis and influenza. Dust Bowl residents showed signs of silicosis from breathing in the extremely fine silt particulates, which had high silica content. Dust pneumonia, known as the “brown plague,” killed hundreds and was particularly lethal for infants, children and the elderly. A plague of grasshoppers and jack rabbits destroyed all the meager crops the dust and drought did not. The grasshoppers were as many as 23,000 per acre and the National Guard had to be brought in the help control them. They would burn insect fields and try crush them with tractors. A great dust storm hit the east coast in May of It was over 2 miles high. It hit washington Dc when lawmakers where debating on a soil conservation bill.

8 Rosie the Riveter(Miller)
When the United States entered World War II manufacturing boomed. Since many of the able bodied men of the country enlisted or were drafted in the military women had to join the work force. Over 6 million women started working in factories all over the country. These women took over all the jobs that the men would usually do. They made airplanes, tanks, and other supplies the troops needed over seas. After the war the women were expected to go back to being house wives while the men went back to work. Rosie the Rivitor posters were made to boost the moral of the factory workers and did not become famous until many years later as a simple of female empowerment. Miller, J. Howard. Rosie the Riveter Graphic. History.comWeb. 10 Apr 2013. Rosie the Riveter(Miller) Symbol of American women’s contribution during WWII Female empowerment Over 6 million women entered the workforce during WWII

10 Job Rejection Letter November 1, 1929 John Doe 1234 Front St, New York, NY Dear John Doe, As you know we have received many applications and interviewed a number of candidates for the Branch Manager position, and we have determined that we are no longer seeking an individual to fill the position. We are closing the location down due to the sudden down turn in the economy. The purpose of this letter is to inform you that you have not been selected for the position and to thank you for your time. You are a very qualified candidate and would look forward to you applying to jobs in the future. We wish you every personal and professional success with your job search and in the future. Regards, First Nation Bank 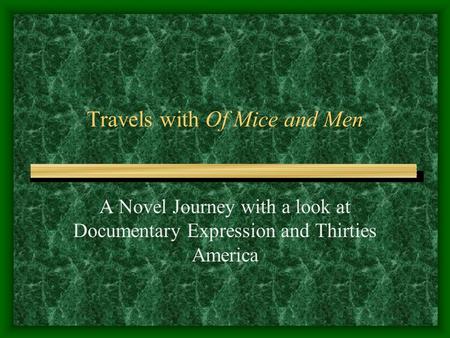 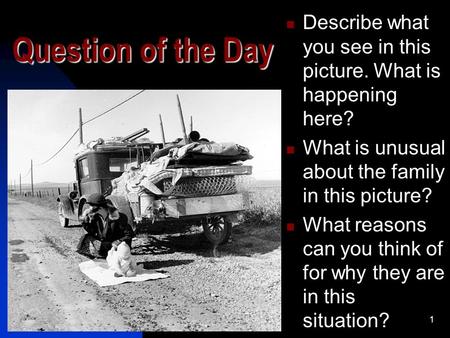 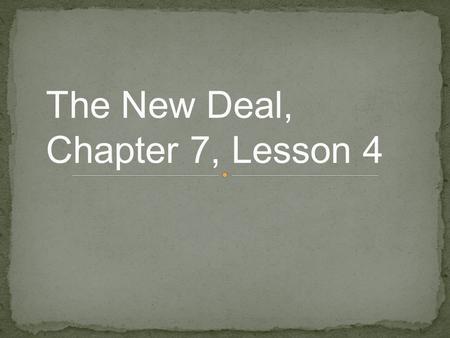 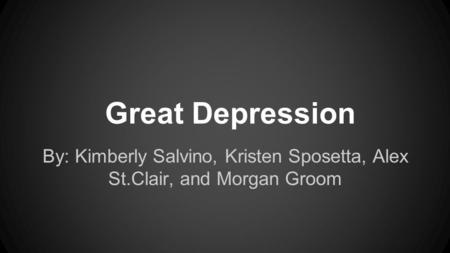 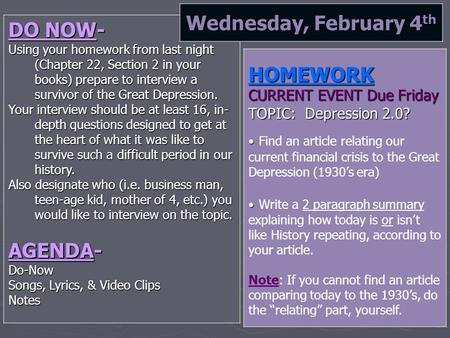 DO NOW- Using your homework from last night (Chapter 22, Section 2 in your books) prepare to interview a survivor of the Great Depression. Your interview. 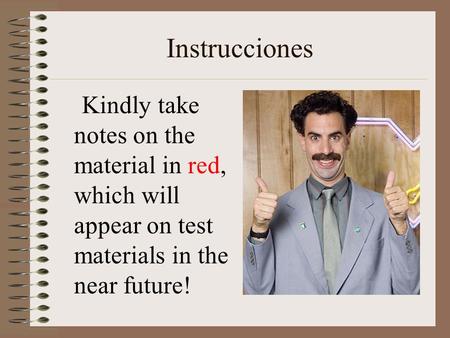 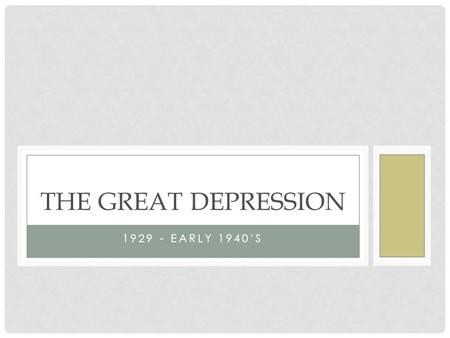 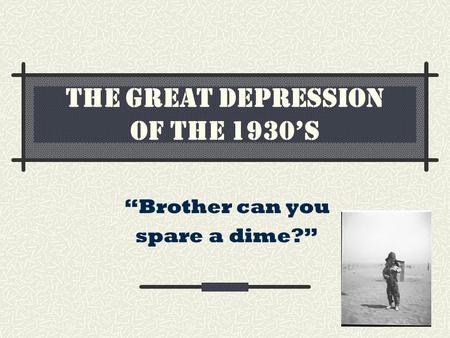 THE GREAT DEPRESSION OF THE 1930’S 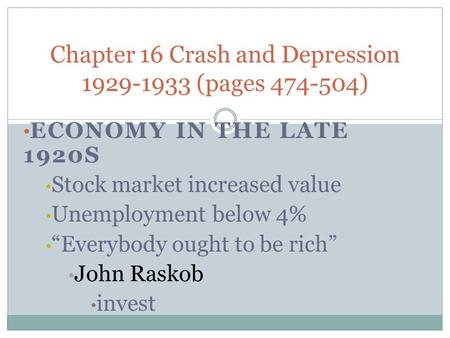 ECONOMY IN THE LATE 1920S Stock market increased value Unemployment below 4% “Everybody ought to be rich” John Raskob invest Chapter 16 Crash and Depression. 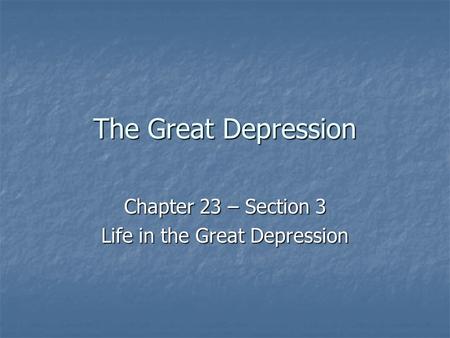 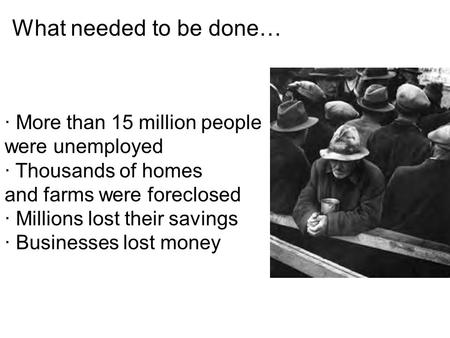 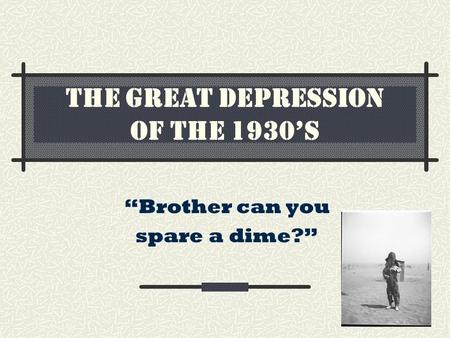 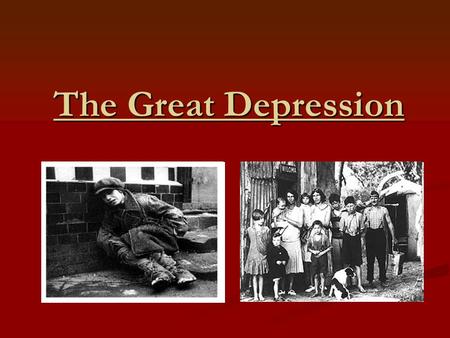 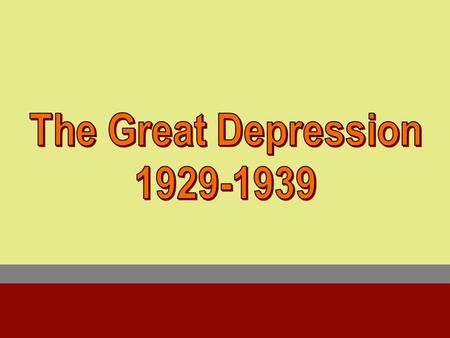 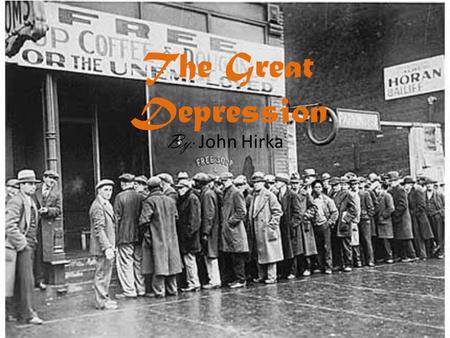 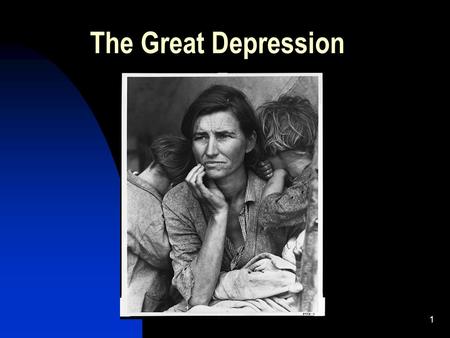 1 The Great Depression. 2 The Start of Depression Describe what you see in this picture. What is happening here? What is unusual about the family in this. 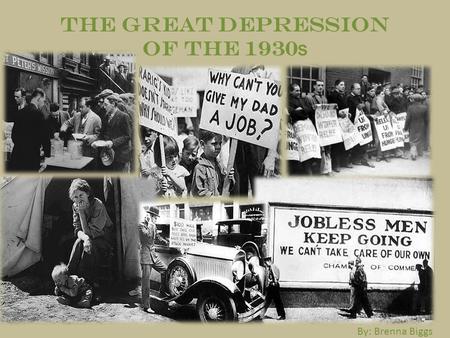 The Great Depression of the 1930 s By: Brenna Biggs. 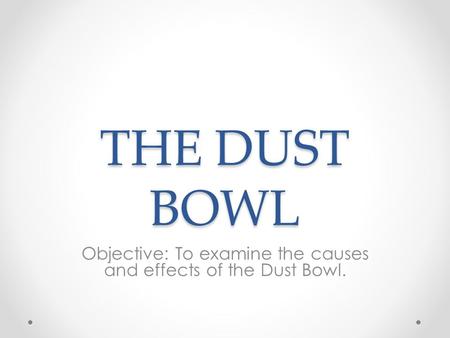