1 The Rise of Kingdoms in Europe

6 Feudalism Weakens Because many serfs and peasants are beginning to leave their manors, the feudalism system becomes weaker

7 Kings become more Powerful Kings became more powerful. People agreed to pay taxes in return for protection and government – Kings are able to afford the powerful armies and the best weapons Lords and knights begin to lose their power

8 Nation-States Emerge During the Late Middle Ages (1300 CE – 1500 CE), several kingdoms continued to increase in size and power and eventually formed nation- states Nation-State: An independent country united under one government and linked by a common culture and language

10 England During the Early Middle Ages, England was dominated by two tribes: – the Angles (northern, central and eastern England) – the Saxons (southern England) In the 800s, King Alfred united the two groups to from one country

12 France A group called the Franks formed the Holy Roman Empire in the 800s Next, the Capetian Dynasty began and rulers of this dynasty continued to expand the French kingdom

13 France (continued) In 1226, Louis IX became King of France at the age of 12 (with help from his mom). Louis was a strong leader: – He defined the duties of royal officials – He created punishments for counterfeiting money – He outlawed duels In 1328, the last Capetian ruler died and France entered a period known as the Hundred Years War

14 The Hundred Years War Lasted from 1337-1453 A series of short wars between England and France over control of land The English won major battles because they had better weapons, mainly the longbow

16 Spain During the 700s, Muslims conquered much of the land in Spain and ruled the area for a few hundred years By the late 1200s, the Christians pushed the Muslims out of Spain, except for small parts The kingdoms of Prince Ferdinand and Princess Isabella joined forming one large Spanish kingdom They were able to defeat the remaining Muslims

17 The Inquisition Although Muslims no longer had control of Spain, some Muslims still lived there This led to the Inquisition During the Inquisition, Christians tortured and killed many people of other religions (Islam and Judaism) because they viewed these religions as a threat

18 Russia During the 900s, Russia was known as Kievan Rus Weakened by civil war, Kiev and its surrounding states were captured by the Mongols, led by Genghis Kahn in the early 1200s They were forced to be part of the Mongolian Empire

19 Russia (continued) By 1380, Russia had gained enough power and wealth to fight back against the Mongols In the early 1400s, the Russians were able to drive the Mongols out of Russia for good The Mongolian Empire in 1279

20 Russia (continued) In 1547, a tsar (ruler) named Ivan IX took control of Russia Ivan feared that nobles would try to overthrow him, so he: – Killed and imprisoned many wealthy citizens – He passed laws making serfs and peasants bound to their land (not allowed to leave). Serfs and peasants were a part of Russia until the 1800s. – He required nobles to supply troops for the Russian army He later became known as Ivan the Terrible 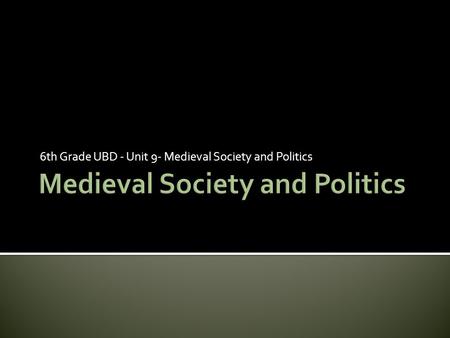 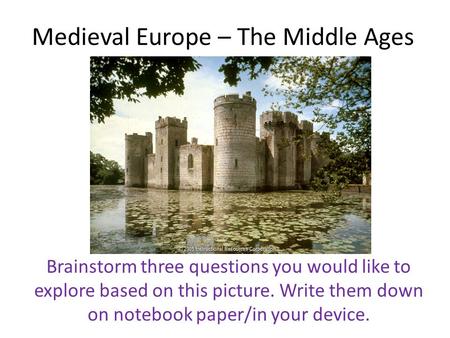 Medieval Europe – The Middle Ages Brainstorm three questions you would like to explore based on this picture. Write them down on notebook paper/in your. 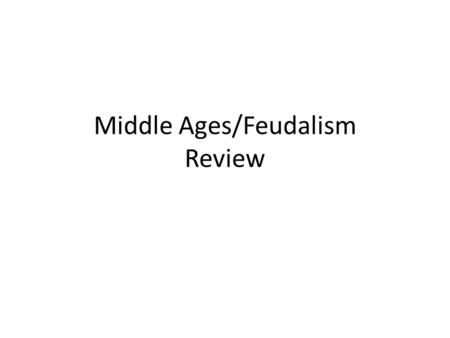 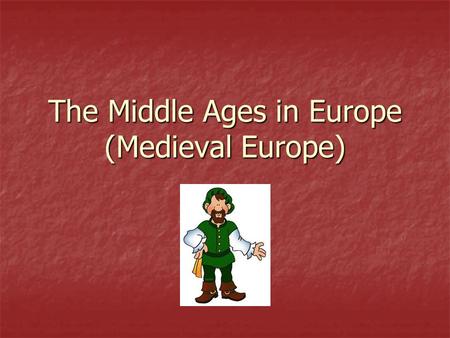