Presentation on theme: "Objectives Explain the difference between weather and climate."— Presentation transcript:

1 Objectives Explain the difference between weather and climate.
Identify four factors that determine climate. Explain why different parts of the Earth have different climates. Explain what causes the seasons.

4 Low Latitudes More solar energy falls on areas near the equator than on areas closer to the poles. The incoming solar energy is concentrated on a small surface at the equator. In regions near the equator, night and day are both about 12 hours long throughout the year. In addition, temperatures are high year-round, and there are no summers or winters.

5 High Latitudes In regions closer the poles, the sun is lower in the sky, reducing the amount of energy arriving at the surface. In the northern and southern latitudes, sunlight hits Earth at an oblique angle and spreads over a larger surface area than it does at the equator. Yearly average temperatures near the poles are therefore lower than they are at the equator.

8 Global Air Circulation
Three important properties of air illustrate how air circulation affects climate. Cold air sinks because it is denser than warm air. As the air sinks, it compresses and warms. Warm air rises. It expands and cools as it rises. Warm air can hold more water vapor than cold air can. Therefore, when warm air cools, the water vapor it contains may condense into liquid water to form rain, snow, or fog.

9 Global Air Circulation
Solar energy warms the ground, which warms the air above it. This warm air rises, and cooler air moves in to replace it. This movement of air within the atmosphere is called wind. Because Earth rotates, and because different latitudes receive different amounts of solar energy, a pattern of global atmospheric circulation results. This circulation pattern determines Earth’s precipitation patterns.

12 Areas of High and Low Pressures
Cool air normally sinks, but cool air over the equator cannot descend because hot air is rising up below it. This cool air is forced away from the equators toward the North and South Poles where it accumulates at about 30º north latitude and 30º south latitude. Some of the air sinks back to Earth’s surface and becomes warmer as it descends. This warm, dry air then moves across the surface and causes water to evaporate from the land below, creating dry conditions.

14 Prevailing Winds Winds that blow predominantly in one direction throughout the year are called prevailing winds. Because of the rotation of Earth, these winds do not blow directly northward or southward. Instead, they are deflected to the right in the Northern Hemisphere and to the left in the Southern Hemisphere.

17 Oceanic Circulation Patterns
Ocean currents have a great effect on climate because water holds large amounts of heat. The movement of surface ocean currents is caused mostly by winds and the rotation of Earth. These surface currents redistribute warm and cool masses of water around the world and in doing so, they affect the climate in many parts of the world.

18 El Niño–Southern Oscillation
El Niño is the warm phase of the El Niño–Southern Oscillation. It is the periodic occurrence in the eastern Pacific Ocean in which the surface-water temperature becomes unusually warm. During El Niño, winds in the western Pacific Ocean, which are usually weak, strengthen and push warm water eastward. Rainfall follows this warm water eastward and produces increased rainfall in the southern half on the U.S., but drought in Australia.

21 Topography Height above sea level (elevation) has an important effect on climate. Temperatures fall by about 6°C (about 11°F) for every 1,000 m increase in elevation. Mountain ranges also influence the distribution of precipitation. For example, warm air from the ocean blows east, hits the mountains, and rises. As the air rises, it cools, causing it to rain on the western side of the mountain. When the air reaches the eastern side of the mountain it is dry. This effect is known as a rain shadow.

23 Other Influences on Earth’s Climate
Both the sun and volcanic eruptions influence Earth’s climate. At a solar maximum, the sun emits an increased amount of ultraviolet (UV) radiation. UV radiation produces more ozone, which warms the stratosphere. The increased solar radiation can also warm the lower atmosphere and surface of Earth a little.

24 Other Influences on Earth’s Climate
In large-scale volcanic eruptions, sulfur dioxide gas can reach the upper atmosphere. The sulfur dioxide, which can remain in the atmosphere for up to 3 years, reacts with smaller amounts of water vapor and dust in the stratosphere. This reaction forms a bright layer of haze that reflects enough sunlight to cause the global temperature to decrease.

25 Seasonal Changes in Climate
The seasons result from the tilt of Earth’s axis, which is about 23.5° relative to the plane of its orbit. Because of this tilt the angle at which the sun’s rays strike Earth changes as Earth moves around the sun.

Download ppt "Objectives Explain the difference between weather and climate." 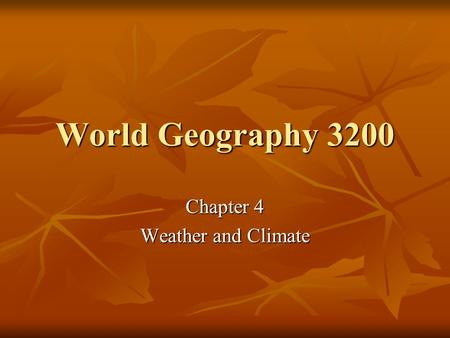 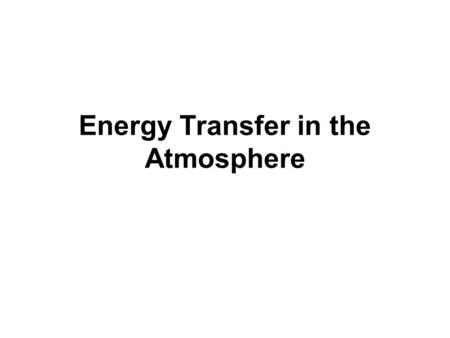