Presentation on theme: "The art of persuasion. It is the spreading of ideas, information or rumor for the purpose of helping or injuring an institution, a cause, or a person."— Presentation transcript:

1 The art of persuasion. It is the spreading of ideas, information or rumor for the purpose of helping or injuring an institution, a cause, or a person. Propaganda is intended to make us accept or approve something without looking closely at the evidence. Most of the propaganda devices utilize emotion and avoid critical thinking.

3 Assertion Commonly used in advertising and modern propaganda An enthusiastic or energetic statement presented as a fact, although it is not necessarily true Often implies that the statement requires no explanation or evidence, but that it should merely be accepted without question Any time an advertiser states that their product is the best without providing evidence for this, they are using an assertion Although usually simple to spot, are often dangerous forms of propaganda because they often include falsehoods or lies.

5 Bandwagon: attempts to persuade the target audience to take a course of action "everyone else is taking." "Join the crowd." An appeal to the subject to follow the crowd, to join in because others are doing so as well Essentially tries to convince the subject that one side is the winning side, because more people have joined it. The subject is meant to believe that since so many people have joined, that victory is inevitable and defeat impossible. Since the average person always wants to be on the winning side, he or she is compelled to join in. However, in modern propaganda, bandwagon has taken a new twist. The subject is to be convinced by the propaganda because since everyone else is doing it, they will be left out if they do not. This is, effectively, the opposite of the other type of bandwagon, but usually provokes the same results.

9 Plain Folks: The use of everyday people to sell a product or service. Speakers and ads appear to make the person to be “one of the people.” Designed to win the confidence of the audience by communicating in the common manner and style of the audience Use ordinary language and mannerisms (and clothes in face-to-face and audiovisual communications) when attempting to identify their point of view with that of the average person Can win the confidence of persons who resent or distrust foreign sounding, intellectual speech, words, or mannerisms Examples: – America’s recent presidents have all been millionaires, but they have gone to great lengths to present themselves as ordinary citizens (Romney identifying with the struggles of Detroit by saying that “my wife drives a Cadillac. Two, in fact.” Or identifying with NASCAR fans by saying that “some of my friends own NASCAR teams.”)

11 Glittering Generalities: The act of referring to words or ideas that evoke a positive emotional response from an audience. Virtue words are often used. Intensely emotionally appealing words so closely associated with highly valued concepts and beliefs that they carry conviction without supporting information or reason Appeal to such emotions as love of country, home, desire for peace, freedom, glory, honor, etc. They ask for approval without examination of the reason. Though the words and phrases are vague and suggest different things to different people, their connotation is always favorable Examples: – Food products will quickly label their foods as low fat hinting that they are more healthy, when, in fact, the product might be high in calories. – Advertisers will sometimes give an incomplete comparison like “better tasting.” Better tasting than what? Spam? Dirt? – Saying that if you love your country, you will support___________

12 Transfer: The act of relating something or someone we like or respect with a product. An attempt to make the subject view a certain item in the same way as they view another item, to link the two in the subject’s mind Although this technique is often used to transfer negative feelings for one object to another, it can also be used in positive ways By linking an item to something the subject respects or enjoys, positive feelings can be generated for it Symbols are constantly used in this form of propaganda Example: – On TV commercials, actors in white lab coats tell us that Brand X cold medicine is better that Brand Y

14 Name calling: The use of names that evoke fear or hatred in the viewer. The name-calling technique links a person, or idea, to a negative symbol. The most obvious type of name calling involved “bad names.” For example: – Fascist – Pig – Yuppie Scum – Bum A more subtle form of name-calling involves words or phrases that are selected because they possess a negative charge. For example: – Social engineering – Radical – Stingy – Counter-culture Examples: A poster that is a play on World War II posters. Communism is equated with downloading MP3s.poster Bill Gates has also been subject to a little name calling.

15 Simplification (or stereotyping) Similar to pinpointing the enemy, in that it often reduces a complex situation to a clear- cut choice involving good and evil This technique is often useful in swaying uneducated audiences.

Download ppt "The art of persuasion. It is the spreading of ideas, information or rumor for the purpose of helping or injuring an institution, a cause, or a person." 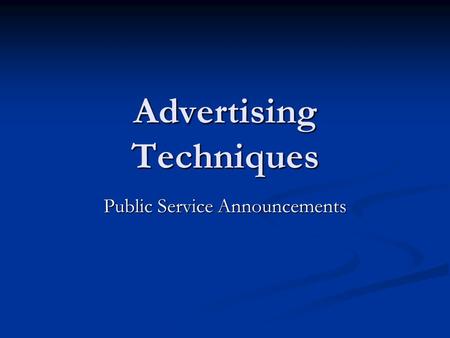 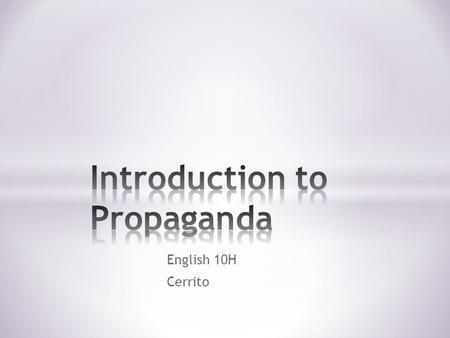