PARTICIPLES, GERUNDS, & INFINITIVES Verbals. Participle A participle is a verbal, which looks like a verb And acts like an adjective. Present participles.

Presentation on theme: "PARTICIPLES, GERUNDS, & INFINITIVES Verbals. Participle A participle is a verbal, which looks like a verb And acts like an adjective. Present participles."— Presentation transcript:

2 Participle A participle is a verbal, which looks like a verb And acts like an adjective. Present participles end in –ing (as in swimming). Past participle end in –ed (as in remembered), -en (eaten), -d (paid), -t (burnt), or –n (seen).

3 Ex: The smiling teacher greeted the students. Ex: The tired joggers walked over the fallen leaves.

4 Participle Phrase A participle phrase consists of the participle, its modifiers, and other words that complete the idea begun by the participle. Ex: That tall woman exiting the lab teaches chemistry. Ex: The concert scheduled for June was canceled.

6 Gerund A gerund is a verbal that ends in –ing and acts as a noun. It can act as a subject, direct object, subject complement (predicate noun), or OOTP (object of the preposition). Ex: Listening is a great asset. Ex: Do you think most students enjoy reading?

7 Gerund Phrase A gerund phrase includes the gerund, its modifiers, and the words that complete the idea begun by the gerund. Ex: Reporting the news was Brooke’s dream job. Ex: We could not stop them from yelling at the game.

8 Writing Tip Although a gerund ends in –ing and looks like a verb, it functions as a noun.

9 Infinitive An infinitive is a verbal consisting of the word to plus a verb. Ex: to pretend, to understand, to laugh The infinitive functions as a noun, adjective, or adverb.

10 Infinitive Phrase The infinitive phrase consists of the infinitive, its modifiers, all of the other words that help to complete the thought begun by the infinitive. Ex: To win was Ted’s goal. (subject) Ex: Everyone wanted to win. (direct object) 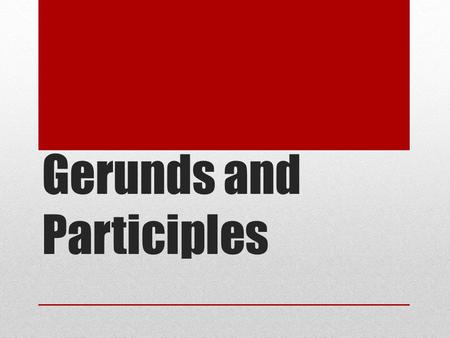 Gerunds and Participles WHAT IS A GERUND? A gerund is a verb form ending in -ing that is used as a noun.