3 Militarism  Many of Europe’s countries competed to have the largest military  Having a large military made each country think they could never lose.  Made war look romantic Alliances  The most powerful countries in Europe formed alliances to protect each other and their interests.  Thought that it would prevent wars

6  France and Germany hated each other!  When Germany became united country in 1870-1, France went to war to try to stop it … but got WHOPPED!

8  Germany’s BIG problem was that it was IN THE MIDDLE of Europe.  That made it VULNERABLE if it came to a war.

11 Franco-Russian Alliance  Russia made an alliance with FRANCE.  Although it was only a DEFENSIVE alliance, it was Germany’s worst nightmare!

14  But Russia was also allied to Serbia, Romania and Bulgaria.  These nations were Slavic like Russia  They hoped their alliance would Russia would help them keep their national independence from Austria-Hungary

15  Austria-Hungary controlled Bosnia  Bosnia was a Slavic nation in the Balkans  Serbia wanted Bosnia to belong to them = nationalism  Previous attempts at freeing Bosnia had failed. 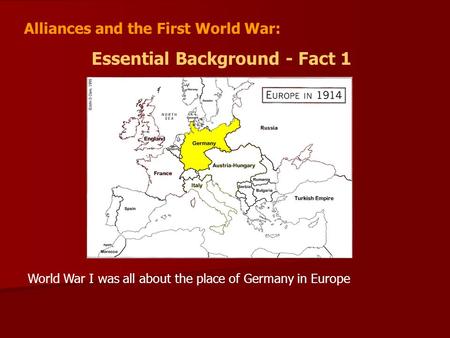 Alliances and the First World War: Essential Background - Fact 1 World War I was all about the place of Germany in Europe.