Presentation on theme: "Questionnaire Results Charlotte Page. Purpose, Aims & Methodology In order to find out what the target audience of my new music magazine would like to."— Presentation transcript:

2 Purpose, Aims & Methodology In order to find out what the target audience of my new music magazine would like to see in the magazine I carried out a questionnaire. This presentation shows the results that I found from conducting a questionnaire. I chose to use a questionnaire as the method for my primary research because it is a quick way to gather quantitative data which then makes it easier to collate the results into graphs and charts. The results from my research shows the thoughts and opinions directly from my target audience so gives clear message as to what they’d like to see in a magazine which is aimed at them.

3 Audience Profile The results of the questionnaire suggests that my target audience is mostly of the female gender, aged 15 to 20. The fact that most of the audience are students suggests that they have a small disposable income, perhaps because they have a part-time job. Due to this and their young age an idea is connoted that they’ll have less financial worries and therefore likely to be able to afford to buy a music magazine.

4 Audience Profile The bar graph below suggests that the majority of the target audience live in Harlow. Their hobbies are quite varied, but the two most popular are films and cinema and attending gigs and concerts. As this is a music magazine, their hobby of gigs and concerts perhaps indicates a possible feature for my magazine as this is likely to be of interest to them.

5 Magazine Distribution These results are in relation to the magazine’s distribution. My audience think that the magazine should be released once a week at a reasonable price of £2.00. This perhaps enforces the idea that the audience have a small disposable income as from this they can purchase a weekly magazine. The target readers are most likely to buy a magazine from a supermarket.

6 Magazine Offers I asked my target audience what offers they would most like to see in the magazine in which the results have shown that the majority would like to see some kind of discounts for gig tickets. I think that this will be something that I will definitely consider as it is clearly something that would attract the audience to my music product.

7 Existing Magazines The target audience prefer the cover of NME due to the image therefore I should consider this for inspiration when creating my music magazine. The image fills the entire page of NME so perhaps this is another idea to consider my I create my media product.

8 Colour Scheme The colour scheme of red, black and white seems to be most popular amongst my target audience so this is something which I should also think about. This colour scheme would be fitting to the rock genre as it is quite bold and fun with it’s use of red, perhaps reflecting the audience.

9 Features & Tone The bar chart below clearly shows that the audience clearly would like to see an interview feature on the double page as this received the most votes, so I think this should be something to act upon. Furthermore, the tone should be quite informal as this will attract the audience and directly address this type of audience.

10 Conclusion & Proposals From my results I am going to take into consideration that my target audience are most likely to be females aged 15 to 20 years old but perhaps also is important to consider there are older readers to so perhaps on average the audience could be 15 to 28. They’re likely to live in Harlow and attend full time college and their interests suggest to me that they are fun, active and outgoing. Participants think £2.00 is a reasonable price for a magazine and inside they’d like to see discounts for gigs and concerts. From these results I will make the magazine a price of £2.00 and will include a discount for perhaps a website such as TicketMaster or SeeTicket in which readers can receive a discount when purchasing tickets online as this using this type of audience can be considered to be more likely to buy tickets online rather than in shops and venues. This enforces the idea that the audience are outgoing and reflects a student lifestyle as the magazine is helping them to same some money. Including a question on current magazines, has shown that the image on the front cover is the most important factor to this target audience as it needs to entice them into buying a magazine straight away. When I take my photos I will make sure that the image is bold and eye-catching, taking inspiration for the NME magazine front cover that I included in my questionnaire. Furthermore, I will use the colour scheme of red, black and white chosen by participants as this will be suitable to the genre. I will make the magazine take an informal tone, as from my research I know that the magazine needs to be fun and a form of entertainment for it’s audience. I propose to do this by perhaps in the interview consider using a question and answer structure as I think this is an informal way of presenting an interview to a reader. Overall the questionnaire that I carried out has been very useful to me as I have a clear understanding of what my target audience would really like to see in a magazine and how I can attract them to the product by including features which will be of interest to them.

Download ppt "Questionnaire Results Charlotte Page. Purpose, Aims & Methodology In order to find out what the target audience of my new music magazine would like to." 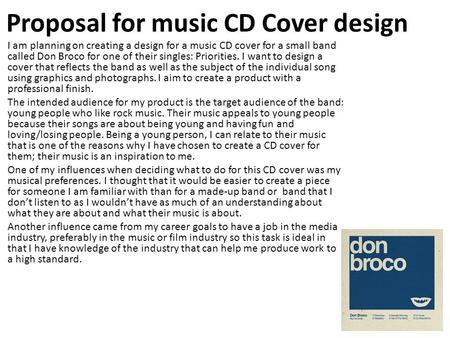 Proposal for music CD Cover design I am planning on creating a design for a music CD cover for a small band called Don Broco for one of their singles: 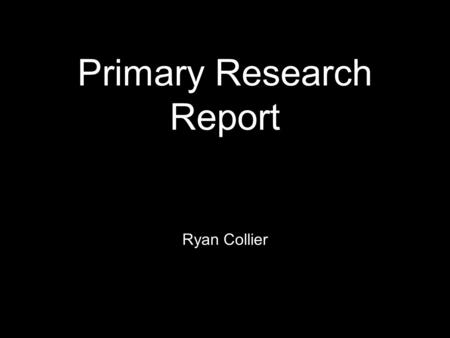 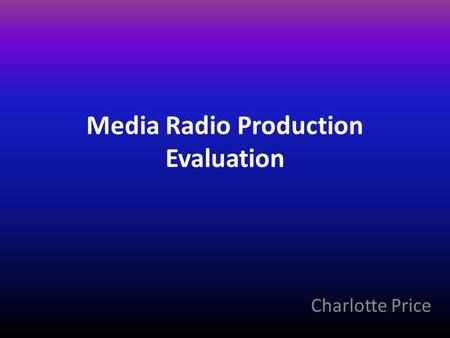