The Balancing Act of Government What Powers Were Granted to the Legislative Branch, the Executive Branch and the Judicial?

Presentation on theme: "The Balancing Act of Government What Powers Were Granted to the Legislative Branch, the Executive Branch and the Judicial?"— Presentation transcript:

1 The Balancing Act of Government What Powers Were Granted to the Legislative Branch, the Executive Branch and the Judicial?

3 Legislative Powers are ENUMERATED Enumerated – specifically listed – powers. The Framers thought it was important to list the powers of each branch of government so that there would not be confusion about what they could and could not do.

4 Congressional Power listed in Article 1, Section 8 To lay and collect taxes To pay the debts and provide for the common defense and general welfare of the United States

5 Congressional Power listed in Article 1, Section 8 To regulate commerce with foreign nations and among the states. To declare war To raise an army and navy To coin money

6 The Framers intended a government of separated powers. Each branch of the government is given powers that enable it to check the use of power by the others.

7 Example of Checks on Powers Congress has the right to IMPEACH the president, other executive branch officials, or members of the federal judges and remove them from power

8 Impeachment Applies to executive branch, the president, and federal judges. House of Representatives votes to bring charges. The Senate holds a trial to determine guilt or innocence. 2/3 majority vote to convict and remove from office. –Only 2 times in US History has a president had such a trial.

10 What power did the national government have over state governments and the people?

12 Some powers of the national government? SUPREMACY CLAUSE: the Constitution and ALL laws and treaties approved by Congress in exercising its enumerated powers are the supreme law of the land.

13 Powers of the national government Article 1, Section 8 gives Congress power to organize the militia of the states and calling the militia into national service when needed.

16 LIMITS on the powers of the national government Suspending the privilege of the writ of Habeas Corpus – EXCEPT IN EMERGENCIES!

17 What is Habeas Corpus? HABEAS CORPUS – Latin for show me the body. Meaning? –If the government is going to put you in jail – they have to show you the proof that they have that you did a crime.

18 Limits on the powers of national government Passing any EX POST FACTO laws –Laws that make an act a crime even though it was legal at the time it was committed.

19 Limits on the powers of national government Passing any BILLS OF ATTAINDER –Laws that declare a person guilty of a crime and decrees a punishment without a trial.

21 Limits on the powers of national government Article III defines the crime of TREASON and prohibits Congress from punishing the descendants of a person convicted of treason.

23 Limits on the powers of state governments States cannot –Create their own money –Passing laws that enable people to violate contracts and get out of paying for their debts.

25 Limits on the powers of state governments States cannot unfairly discriminate against citizens of another state –Does this apply in football situations??? Refusing to return fugitives from justice to the states from which they fled

26 What issues separated states? The Great Compromise settled disagreement between large and small states over how they would be represented in Congress. BUT …..

27 What issues separated states? Slavery was an issue between Northern and Southern states. –States like North Carolina, South Carolina and Georgia would not join a government that did not allow slavery.

28 What issues separated states? Northern states that had citizens that were in the slave trade did not want to be restricted in the COMMERCE of the slave trade.

29 Compromise on Slavery Slaves were counted as 3/5 a person when they did census counts to determine –How many representatives were in Congress –Taxing citizens for their property. –Fugitive slave clause returned escaping slaves to their owner.

30 Powers Granted to the Executive Branch The Presidency

31 The Framers wanted to LIMIT executive power Needed a president with enough power and independence to fulfill their duties. But they didn’t want a king to develop. –4 year term of office –But could run for re- election. No limits on reelection until 1951

32 Executive Powers under the US Constitution Carrying out and enforcing laws made by Congress. Nominating people for federal office Negotiating treaties with other nations. Conducting wars.

33 Executive Powers under the US Constitution Pardoning people convicted of crimes. To send and receive ambassadors to and from other countries.

34 Executive Power: Shared powers with Congress VETO The president can VETO a bill passed by Congress. President can say that the bill cannot become a law.

35 Congress’ shared power with the President Congress can still make a bill a law after the president vetoes it IF BOTH 2/3 of the House and the Senate approve it. –OVERRIDING A VETO.

36 Executive Power: Shared powers with Congress The President nominates executive branch officials and federal judges. BUT the Senate has the right to approve or disapprove the nomination.

37 Executive Power: Shared powers with Congress The President has the power to negotiate a treaty with another nation. BUT the treaty must be approved by a 2/3 vote in the Senate.

38 Executive Power: Shared powers with Congress The President is Commander in Chief. BUT Congress has the power to DECLARE war. Congress also controls the money to wage war. BUT the president has to ask Congress to consider DECLARING a war.

39 How should a president be selected? ELECTORAL COLLEGE –Each state selects members called ELECTORS. –Each state has the same number of electors as it had senators and representatives in Congress.

40 Electoral College Each electoral would vote for TWO PEOPLE, one of whom had to be a resident of another state. The person who received the highest number of votes would become the president. 2 nd place became vice president.

41 Electoral College IF two people tied OR there was no majority – the the House of Representatives would select the president by majority vote. –Each state had only 1 vote! ONLY USED IN 1824 –Tie in vice president would be broken by a Senate vote.

42 Electoral College Today Changes in 1828 and 1961. Whoever gets the majority of votes in the state – gets ALL the electoral votes. EXCEPTION! Nebraska and Maine. –Electoral votes can split. Never has happened.

Download ppt "The Balancing Act of Government What Powers Were Granted to the Legislative Branch, the Executive Branch and the Judicial?" 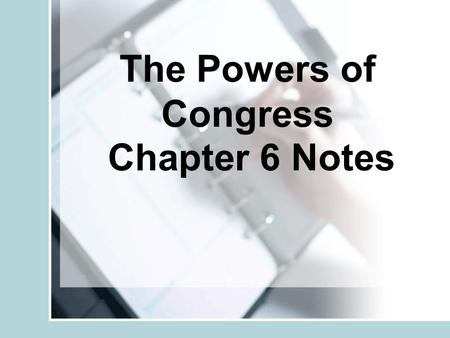 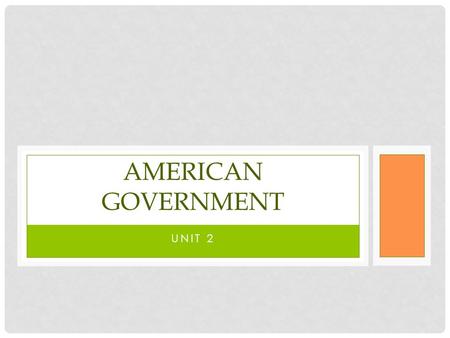 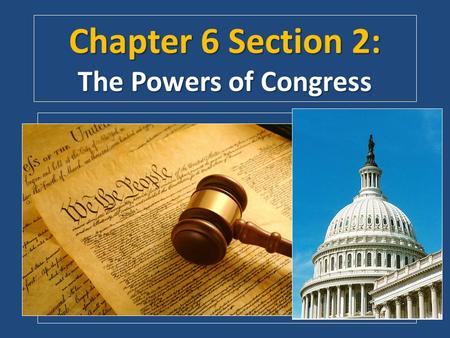 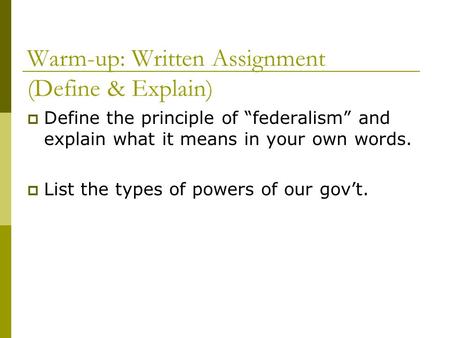 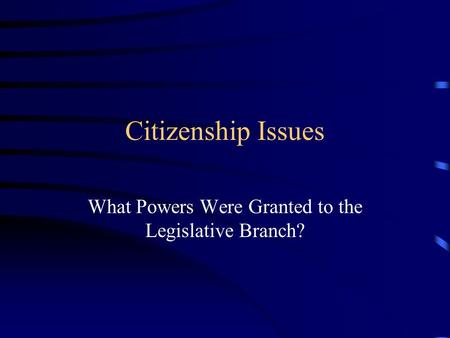 What Powers Were Granted to the Legislative Branch? 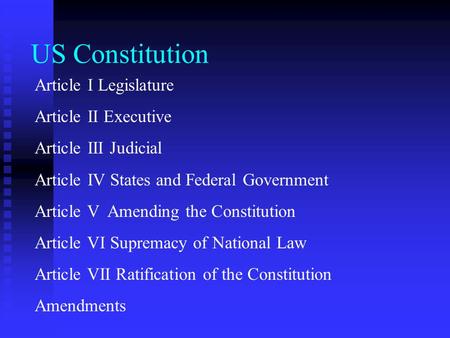 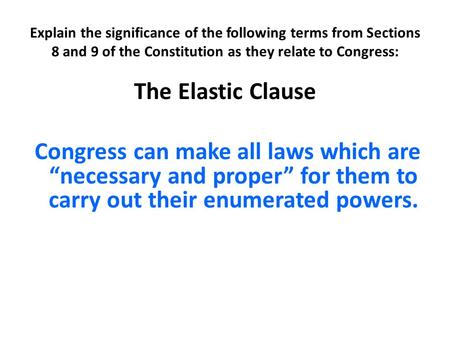 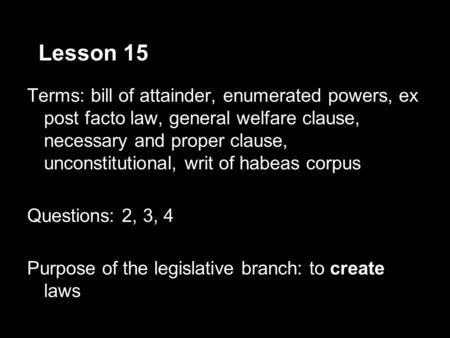 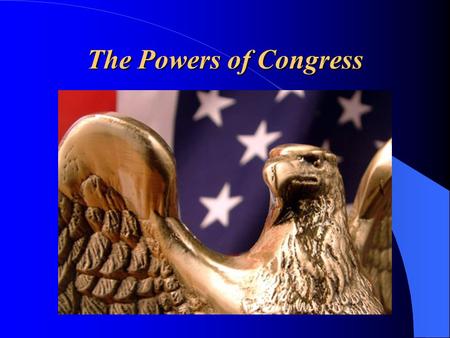 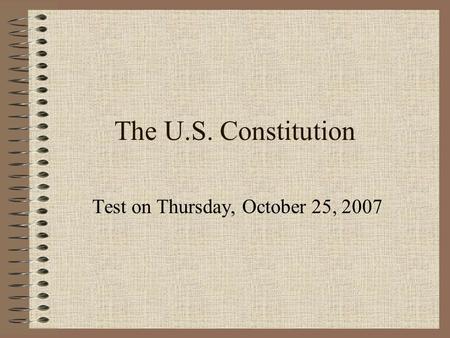 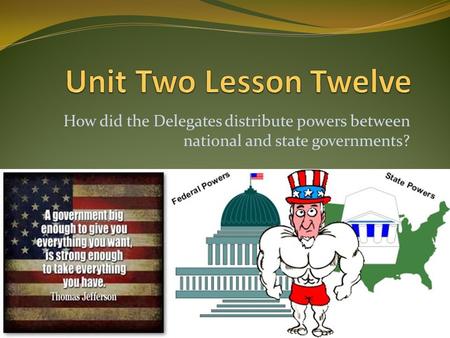 Unit Two Lesson Twelve How did the Delegates distribute powers between national and state governments? 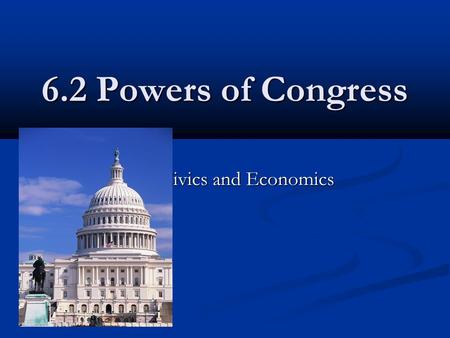 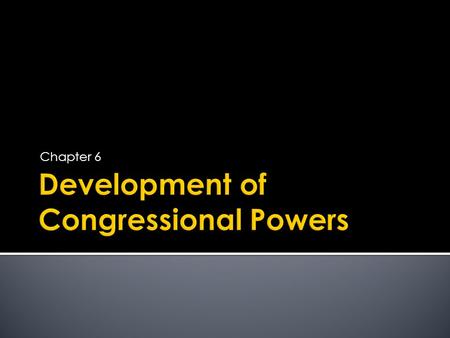 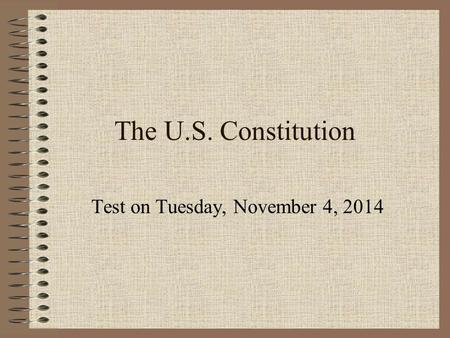