2 Preparing Reports  Analyze the report problem and purpose.  Develop a problem question (Are customers satisfied with our service?) and a purpose statement. (The purpose of this report is to investigate customer satisfaction and to recommend areas for improvement.)

3 Preparing Reports  Anticipate the audience and issues.  Consider primary and secondary audiences. What do they already know? What do they need to know?  Divide the major problem into subproblems for investigation.

7 Preparing Reports  Interpret and organize the data.  Arrange the collected data in tables, grids, or outlines to help you visualize relationships and interpret meanings.  Organize the data into an outline.

8 Preparing Reports  Prepare graphics.  Make tables, charts, and illustrations – but only if they serve a function. Use graphics to clarify, condense, simplify, or emphasize your data.

9 Preparing Reports  Compose the first draft.  Write the first draft knowing that you will revise it later.  Use appropriate headings and transitional expressions to guide the reader.

10 Preparing Reports  Revise and proofread.  Revise to eliminate wordiness, ambiguity, and redundancy. Look for ways to improve readability, such as bulleted or numbered lists. Proofread three times for (1) word and content meaning, (2) grammar and mechanics, and (3) formatting.

11 Preparing Reports  Evaluate the product.  Decide whether the report will achieve its purpose. Encourage feedback so that you can improve future reports.

14 Report Components: Front Matter  Transmittal document  Announce the topic and explain who authorized it.  Briefly describe the project and preview the conclusions – if the reader is supportive.

24 Structural Cues for Reports  Headings  Write short but clear headings.  Experiment with wording that tells who, what, when, where, and why.  Include at least one heading per report page.  Try to create headings that are grammatically balanced at a given level. For example: Creating Team Motivation Treating Employees Like Customers (not Employees Should Be Treated Like Customers)

25 Structural Cues for Reports  Headings  Integrate headings gracefully. Try not to repeat the exact wording from the heading in the following sentence.  Avoid using the heading as an antecedent to a pronoun. For example, avoid: CUSTOMER SURVEYS These are...

26 Levels of Report Headings REPORT, CHAPTER, AND PART TITLES The title of a report, chapter heading, or major part should be centered in all caps. First-Level Subheading Headings indicating the first level of division are centered and bolded. Whether a report is single-spaced or double-spaced, most writers triple-space (leaving two blank lines) before and double-space (leaving one blank line) after a first-level heading. Second-Level Subheading Headings that divide topics introduced by first-level subheadings are bolded and begin at the left margin. For that reason, a second-level subheading is also called a side heading. Third-level subheading. Because it is part of the paragraph that follows, a third-level subheading is also called a paragraph subheading. It should appear in boldface print.

30 Report Components: Back Matter  Conclusion  Recap the purpose and review the main points.  Tie the main topics together, and, when appropriate, ask for action and/or goodwill.

31 Report Components: Back Matter  Appendix(es)  Include items of interest to readers, such as data- gathering tools like questionnaires (these are originally created items).  Each appendix item should be in its own appendix

34 Report Components: Back Matter  References  List all references cited in the paper.  References should be arranged alphabetically. 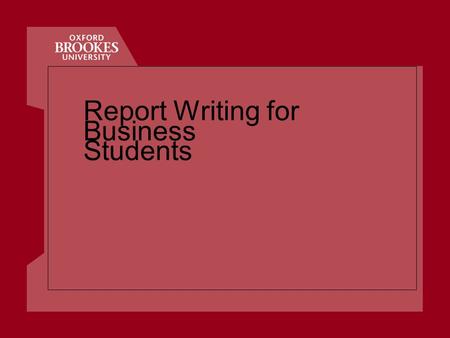 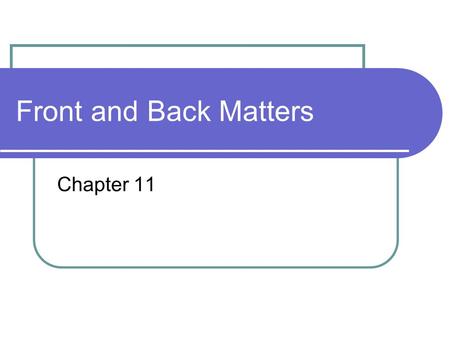 Front and Back Matters Chapter 11. 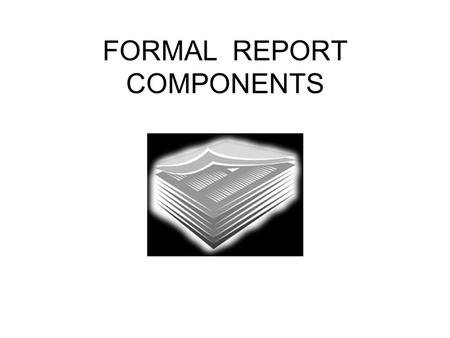 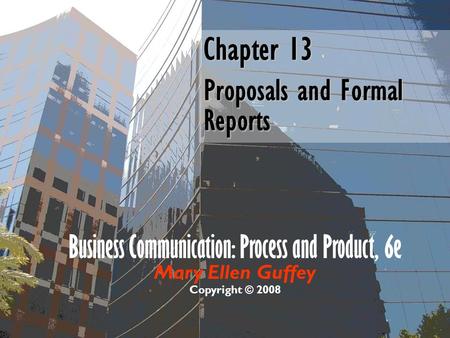 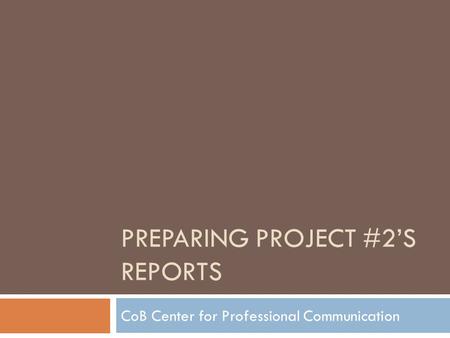 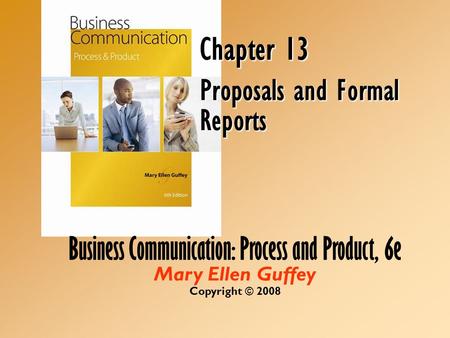 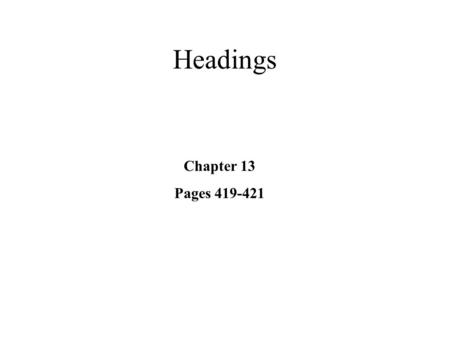 Headings Chapter 13 Pages REPORT, CHAPTER, AND PART TITLES The title of a report, chapter heading, or major part (such as CONTENTS or NOTES) 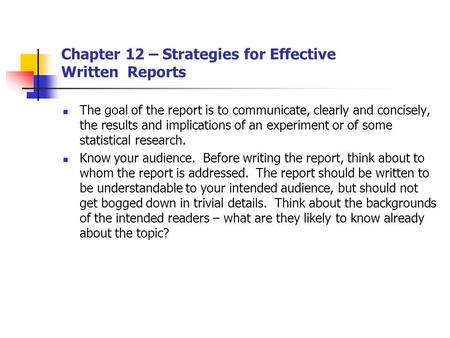 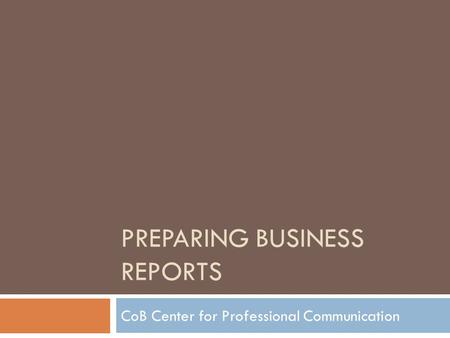 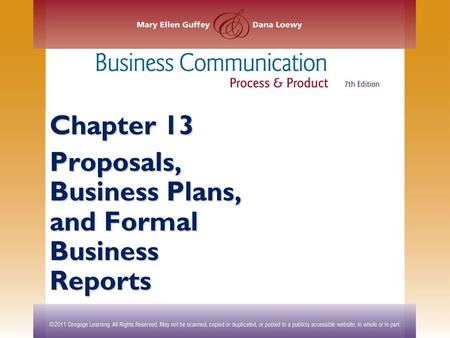 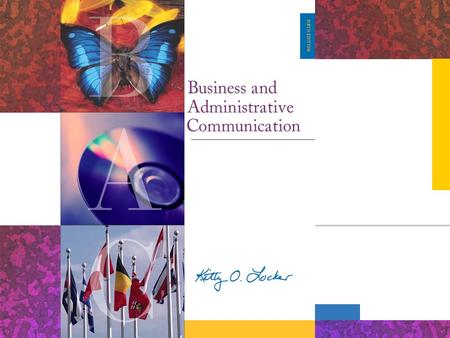 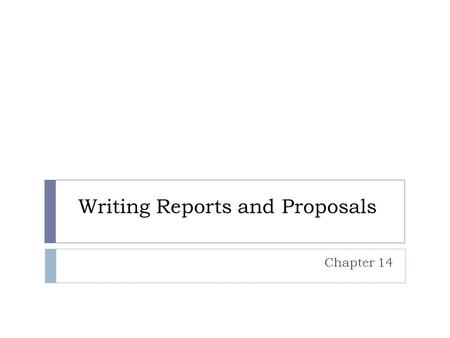 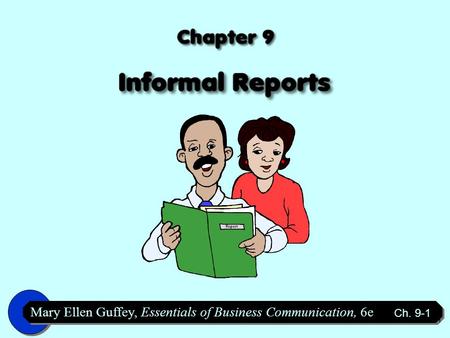 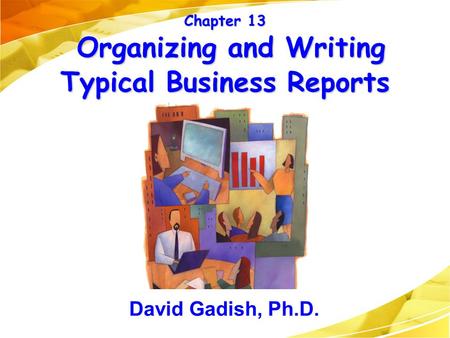 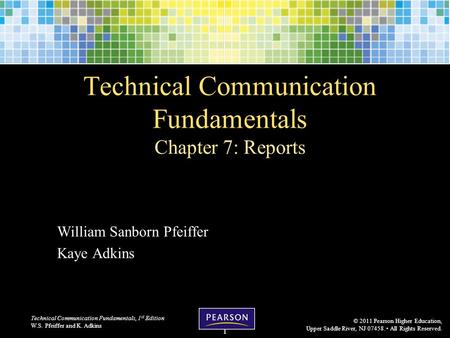 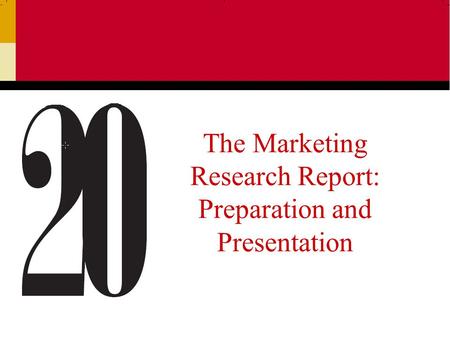 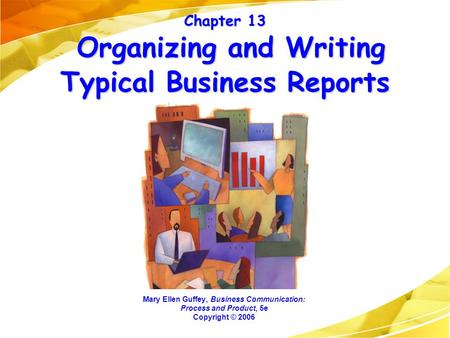 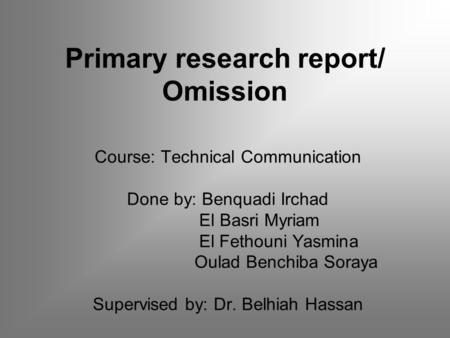 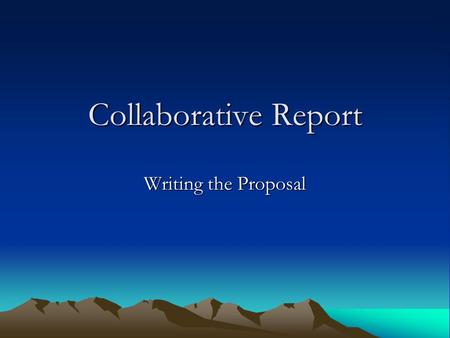 Collaborative Report Writing the Proposal. Definition Proposal: a document written to convince your audience to adopt an idea, a product, or a service. 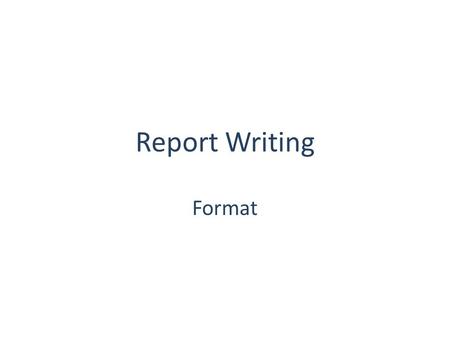