Presentation on theme: "Green house effect is an important natural process. Without it, the Earth would be too cool for the survival of living organisms. Carbon dioxide is the."— Presentation transcript:

2 Green house effect is an important natural process. Without it, the Earth would be too cool for the survival of living organisms. Carbon dioxide is the main green house gas. But…human activities had released more green house gases to the atmosphere. CFC, methane, nitrous oxide and ozone. The green house effect. Will increase the Earth temperature This phenomenon known as GLOBAL WARMING.

4 Earth has been warmed by about 1ºF (0.6 °C) over the past 100 years. And way this happened? Global Warming: Global warming refers to an average increase in the Earth's temperature, which in turn causes changes in climate. The Greenhouse Effect: Greenhouse gases make the Earth warmer by trapping energy in the atmosphere. Have you ever seen a greenhouse?

5 1.The sun heats up the Earth. Some of the sun’s solar rays bounce off of the Earth’s atmosphere and return to outer space. Some make it all the way to the surface of the Earth. 2. The rays that reaches the Earth warm the Earth. When the Earth is warm, it radiates its own rays of heat, called infrared rays. Some of these rays escape to outer space. 3. Others are absorb by gases called “greenhouse gases” which radiate heat. Greenhouse gases allow the earth to be in just the right temperature for life. 4. Higher concentrations of carbon dioxide and other "greenhouse" gases (methane, nitrous oxide, ozone and water vapor) trap more infrared energy in the atmosphere than occurs naturally. The additional heat further warms the atmosphere and Earth’s surface.

7 When the Earth temperature is increase, It will cause the melting of the ice sea. This phenomenon, will increase the sea level. Can you imagine what will happen if the ice still melt year by year??

9 Disappearing Ice Packs Warmer temperatures could affect the wildlife the artic regions because of the melting of the sea ice. Native peoples in these areas depend on the ice berg to hunt seals and walruses. Increased Air Pollution Air pollution in high-density cities can be a health hazard to individuals with asthma. Photochemical pollutants tend to increase with warmer temperatures.

10 Global warming may be a big problem, but there are many little things we can do to make a difference. 1.Governments can adopt a range of options for reducing greenhouse gas emissions, including encouraging the use of renewable energy sources (such as wind and solar power) eliminating subsidies that encourage the use of coal and oil by making them artificially cheap protecting and restoring forests, which serve as important storehouses of carbon 2.Individuals can reduce the need for fossil fuels and often save money by driving less and driving more fuel-efficient and less-polluting cars using energy-efficient appliances using less electricity in general

Download ppt "Green house effect is an important natural process. Without it, the Earth would be too cool for the survival of living organisms. Carbon dioxide is the." 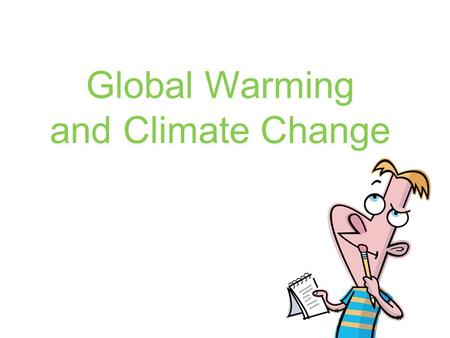